Why are the engines of the Airbus A400M slightly tilted down? 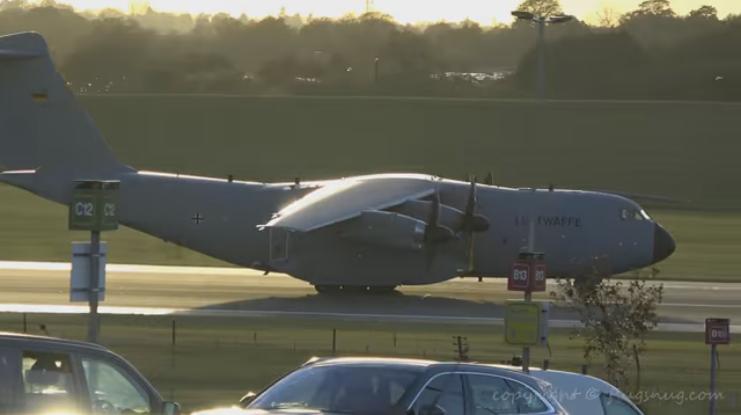 Second, if it is true, what is the reason?

Just about all propeller driven airplanes big and small have the engine thrust line canted down a couple degrees from the wing chord line (not necessarily the longitudinal axis - that depends on the wing incidence), roughly equal to the cruising AOA, so that the thrust line is aligned a little closer to the free stream at cruise. On the A400 it looks like the nacelles are creating a bit of an optical illusion that exaggerates the effect, although the propellers do appear to be canted a bit relative to the fuselage. Thrust lines may also be offset to mitigate undesired pitching moments caused by thrust.

Single engine airplanes with the engine on the nose also often cant the engine to the side several degrees as well, to compensate for P factor and torque effects, reducing the amount of fin offset required at the tail. Look straight down on a typical single like a 172, with the prop stopped horizontally, and you can see the prop isn't quite parallel to the wings. Once you gain awareness of this you start to notice that most single engine planes you see have engines that are cockeyed, as if they were bent.

As Jeffrey points out in his comment to the question:

In flight, they are probably horizontal.

When that plane is at cruise conditions, it will be in a very slightly nose-up pitch attitude. the thrust line from the props will then be in the direction of travel.

Not the answer you're looking for? Browse other questions tagged aircraft-design aircraft-performance airbus or ask your own question.

23
Was there an incident when Airbus autopilot wasn't letting the airplane land?
9
Which aircraft endure the highest Max Q's (aerodynamic pressure)?
8
Why weren't the Airbus A330 engines designed with a system to stop their fans?
11
Airbus control architecture - where does the actual autopilot live?
8
Would putting several small propellers on a wing be efficient?
3
Why are the boundary layer suction holes placed far forward from the engine?
29
Why do most airliners have underwing engines, while business jets have rear-mounted engines?
1
Why did Boeing keep using yokes while Airbus moved on to sidestick?
1
Do ultralight engines need a thrust bearing?
12
Why wasn't the 737 MAX's landing gear lengthened enough to mount the engines under the wings, rather than in front of them?