Is it right to extend flaps only in the white arc?

If the cruise speed is >80kts on the downwind leg but I can only extend flaps in the white arc, am I right in saying I need to get to the white arc, even if I'm on - for example - 100kts?

For reference, note the 'white arc' on this airspeed indicator. 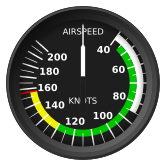 Yes you must slow down to the white arc, or whatever your flap extension speed is for a given condition, regardless. If you are 10kts above the white arc and drop flaps anyway, it's not going to make the airplane come apart, and if you did it once, slap yourself on the wrist and don't do it again. It's putting stress on the flap attachments beyond what they are certified for, and eventually if it's done repetitively over a long period you might start seeing cracks in hinge arms, brackets etc.

On transport airplanes if you do that you get an overspeed warning and you are expected to declare the incident which will trigger a fairly straightforward visual inspection of the flaps. On a small a/c, if nothing is bent, don't worry about it if it was just a few knots over, but don't keep doing it. If it was WAY over, like 20 or 30 kt above the white arc, you should tell whomever owns or maintains the airplane about it so someone who knows what to look for can look it over.

In fact, as a matter of good airmanship, you should get into the habit of being well below the top of the white arc, within reason, before extending flaps (I slow down to not much above the flaps up approach speed before dropping flaps - it's a matter of being on top of how your aircraft flies, and staying ahead of it, mentally). This is simply a matter of taking care of the machinery and not beating the crap out of it; it'll mean the difference between having to replace hinge bushings at 5000 hrs for the pilot who takes care of the equipment vs 2000 hrs for the pilot who treats his/her plane like a mule.

Not the answer you're looking for? Browse other questions tagged airspeed flaps aircraft-limitations or ask your own question.

20
Why is there a difference between GPS Speed and Indicator speed?
1
Maximum Flaps extended speed Vfe for full or partial flaps?

5
How does the IAS stall speed vary with increasing altitude?
4
How can coefficient of lift on the ground with flaps in the takeoff position be calculated using airfoil data?
19
What is the reason for changing the speed reference (IAS or Mach number) with altitude?
2
What are typical airspeeds and lift coefficients for UAVs at different flight stages?
9
How do the uninterrupted and interrupted flaps compare?
9
What are possible causes for the flaps not deploying on a Cessna 172?
6
Why does the A320’s maximum allowable aileron deflection decrease, rather than increase, when the flaps are extended?
0
Why does the DHC-6 pitch down when the flaps are retracted, rather than up?
2
Does the flap settings for the best lift/drag ratio change with speed on the Diamond DA20-A?
3
Are overwing exits still useable if the flaps can’t be lowered?