Why would a fighter use the afterburner and air brakes at the same time?

I was looking for air brake pictures on different fighters, and then I saw a Tornado using afterburner and air brake at the same time! Air brake duty is to reduce speed, isn't it? So why would a fighter burn so much fuel to increase thrust and then use speed brakes simultaneously? 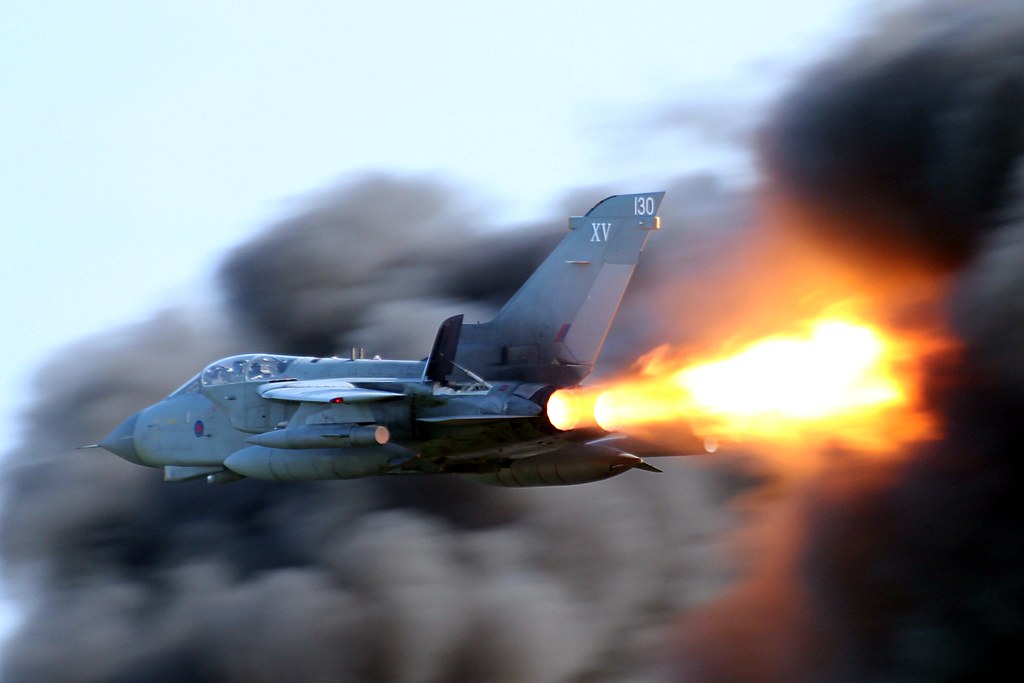 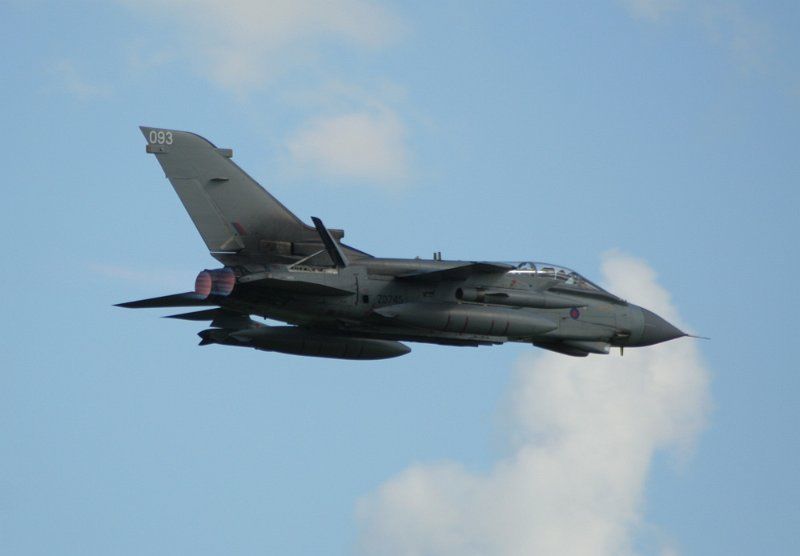 The first photo is from the Tornado Role Demonstration Team's display at RAF Leuchars in September 2012 (source).

That Sep '12 show or its preparation is on YouTube. Most of the instances of the air brakes as seen from the cockpit (looking behind) are followed by the swing-wing extending and the afterburner turning off (you can tell from the sound of the variable nozzle actuators).

While the photos are cool, I'd say it's just perfect timing before the pilot turned off the afterburner while slowing down.

Such example (above) can be seen after 7:40 in this video. Notice the wing position, and from the video notice the aforementioned sound once the wing is extended.

Another possible reason is slowing down for the spectators to see and hear the afterburner. That can also coincide with the fake bomb drop – a pyrotechnic wall of fire, the smoke of which can be seen in the first photo in the question (example below). 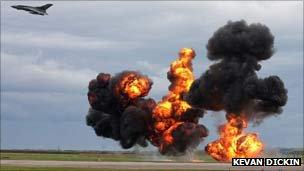 While the pictures above are most likely a result of the reason posited by ymb1 (showing off max blast while staying subsonic for the crowd), using afterburner with speedbrakes to reduce weight is a known practice in the fighter community, in line with Kolom's answer. Even if an aircraft is equipped with a fuel dump system, environmental restrictions and standard operating procedures limit the altitude at which fuel may be dumped; if already below that floor, using afterburner with speedbrakes extended is a practical way to reduce landing weight. I don't have any specific sources to cite, just drawing on my experience as a naval aviator.

Not the answer you're looking for? Browse other questions tagged military afterburner airbrakes panavia-tornado or ask your own question.

12
What causes the sudden spool-up sound from an F-16 when enabling afterburner?

8
How does flying with flaps differ from flying with airbrakes?
20
Why do heavy bombers not carry air-to-air missiles?
34
What are these boxes built into the tails of some fighters?
7
Will afterburner work at settings less than full dry thrust?
14
Why do military jets seem to always take off using the afterburner?
6
What effect would a afterburner have on the compressor if the nozzle outlet is not increased?
1
What procedures are used for midair refueling without air supremacy?
5
When, exactly, were the DC-8’s airbrakes removed?
6
Do afterburners use excessive amounts of fuel?
1
F-16 low speed SAM avoidance tactics?