How much force is produced by control surfaces?

For some context, I'm a game developer and I'm building a flight sim game. My goal is to have realistic -- not arcade -- physics. The game is in Unity. Unity handles the actual application of the forces -- I just calculate the numbers.

The forces applied to the plane are:

I use a constant thrust directed forward relative to the plane, a constant weight force directed down (world), lift calculated with the below equations directed perpendicular to velocity, and drag directed opposite to velocity. I also have a down force provided by the elevators.

Here is a screenshot of the plane and the forces. Pretent it's an A320 -- it's just a placeholder for now. At the time of the screenshot the plane was travelling at $150kn$. 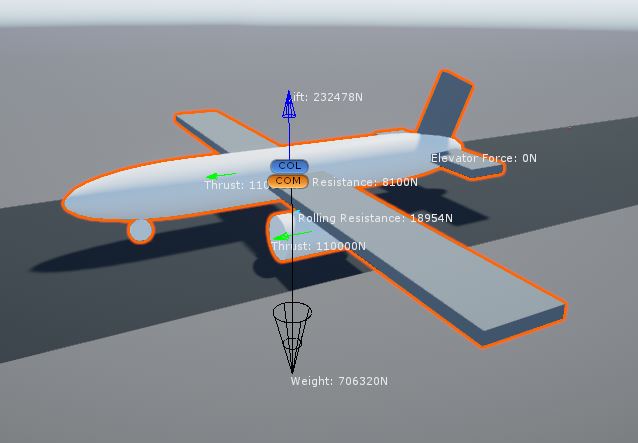 When I apply full throttle to the engines, the plane accelerates as normal. However, upon reaching a typical airliner rotation speed of $150kn$, precisely nothing happens. The plane doesn't lift off the ground until reaching almost $300kn$ where $F_L$ finally overcomes $F_W$. The way I see it, there are two possible causes. First is that my lift maths is wrong, and second is the force provided by the elevators is wrong. I calculated lift as shown here in my other question.

This begs the question, how much force do the control surfaces provide? In particular, the elevators. I know the horizontal stabilizer acts essentially as an upside down wing where the elevators act like flaps/spoilers. I tried using the same lift equation but the force was much to high and the plane would spin uncontrollably on the spot. I also tried calculating (estimating) by hand the torque required to overcome the torque lift of the wing due to the center of lift being behind the center of mass, and then a bit extra to make the torques unbalanced causing rotation. However this was not enough force.

Similarly, how do I calculate how much force is provided by the ailerons, flaps and spoilers -- how do I model this mathematically? Does it just modify the coefficients of lift/drag or do I apply a whole new force?

From the OP, it seems like you are treating the aircraft as a point mass. As a point mass, you don't get the rotational degrees of freedom, so control surface can't be accurately modeled. In the case of takeoff, rotation is achieved via elevator up force, resulting in aircraft pitching up, increasing its angle of attack, resulting in increased the overall lift and achieving the initial vertical acceleration. In summary, you can't model it from first principle without the rotational degrees of freedom.

There are a few things you can do.

Not the answer you're looking for? Browse other questions tagged aerodynamics flight-controls aircraft-physics control-surfaces or ask your own question.

0
How do I calculate the center of lift?

2
How to calculate aileron deflection for achieving similar roll dynamics at thin and dense air?
5
What are the typical lift, lift coefficient and drag coefficient for a A320 in cruise?
0
Which moments are acting on a flying airplane?
3
What factors are included in the moment coefficient of a wing?
0
How do fighter jets stop pitching motion after a elevator deflection?
2
Explained intuitively, why does aspect ratio affect induced drag?
0
Forward slip dynamics