What is the area between the taxiway and runway shown in the picture below?

Is this the Arresting area? I'm not too sure what you call this area

Additional information on the airport would have been nice, but from the markings it looks like it simply is a pad where two aircraft can be positioned at once.

This can be useful where you have a case of eg. one aircraft needing additional time to be ready for take-off while the aircraft behind is all set, or a larger aircraft in front being held back to allow a smaller aircraft to pass it and take off first.

Copenhagen Airport (CPH) has a similar layout at the end of one of the runways, as shown below, although this is using two taxiway stubs rather than one solid pad. 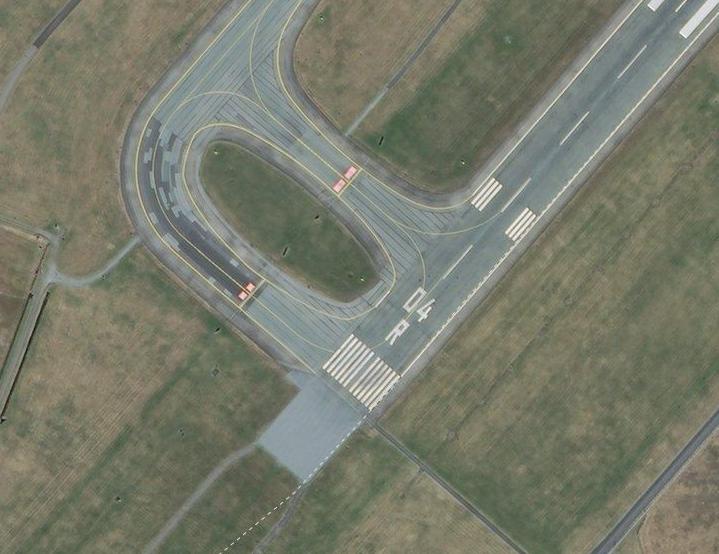 I suppose it is a turning area for making a U-turn after a backtrack. You can see traces from such turns on ground

If this is a military airfield it is the arming area where ground crews do final arming of ordnance on the aircraft before it takes off. The extra space also allows more room for marshalling multiple mission aircraft to compress takeoff intervals.

Not the answer you're looking for? Browse other questions tagged airport runways terminology airport-design taxiways or ask your own question.

12
How is a prevailing wind/average temperature study conducted to determine the runway direction and length for an airport?
6
What do taxiway lane, taxiway strip and taxiway shoulder mean?
10
Is there a name for the area for aircraft to back track near the runway threshold?
15
For what reasons might a taxiway be mistaken for a runway?
4
What is the runway holding short line on Taxiway B between B2 and B3 at KFAT for RWY29L?
2
What are the meanings of those SFO Taxiway Marking?
2
"Gross" and "net" planned runway length for the Haifa airport
3
Do private airports have to have the same runway and taxiway dimension and separation requirements as public airports?