Airspeed Calibration alternate static source, what is this for? 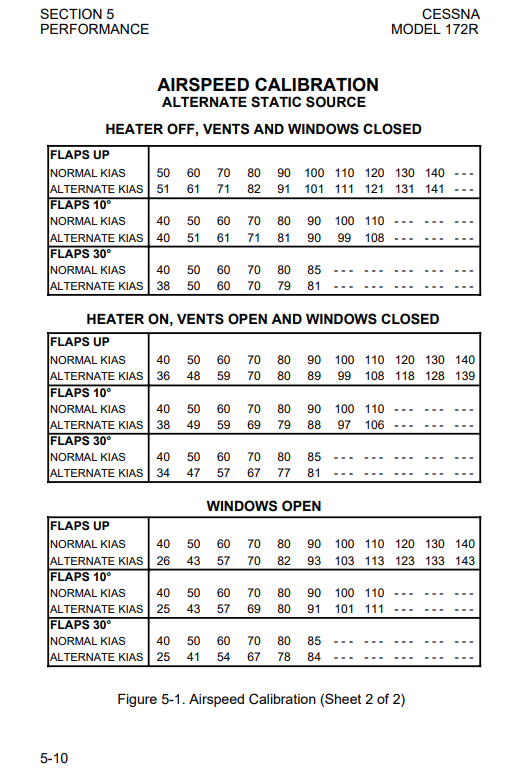 What are those figures for?

This table is included because of the fact that the Alternate Static Port on 172s is inside the cabin. Thus, changes in cabin pressure (even really small ones) can have an impact on the static pressure that the system is using and hence on the indicated airspeed.

The things the table mentions like windows and heat vents all influence the pressure in the cabin, and hence the airspeed. In reality, if you have to use the alt static port you aren't going to be pulling out the POH to correct the speed as it is likely very similar.

Not the answer you're looking for? Browse other questions tagged airspeed poh or ask your own question.

3
What's the speed callout by the PNF on airliners for?
33
Why does Airbus not display the exact airspeed on the PFD?
17
Is it possible to accurately measure airspeed without pitot tube?
9
What type of airspeed are wind speeds given in?
3
Best glide speed vs. best glide angle? Maximum glide range?
3
How can I calculate the speed gain from using multiple STC modifications together?
2
What are the equation linking static air temperature with true airspeed & altitude?
10
How does it feel like to be outside a flying airplane?
3
Does anyone know why IAS and Mach are inconsistent in Boeing FCOM?