Are the A380 engines interchangeable (given they are not all equipped with reverse)?

I have noticed that the A380 only uses the two engines closest to the fuselage to reverse thrust to brake. Are all four engines the same (i.e.: could they theoretically swap engine 1 and engine 2) or are the inside ones different from the outside ones?

In general, would the outside ones have reverse capabilities if they were installed on the inside or are they different types of engines?

The Airbus A380 comes with two engine choices:

The thrust reversers are not part of the core engines. The reversers are developed by the company which produces the engine nacelle, in this case Safran Nacelles. They developed nacelles for both engine variants for the A380, including the first electrically actuated reversers:

Safran Nacelles nacelle systems equip the Airbus A380 powered by four Rolls-Royce Trent 900 engines or four Engine Alliance GP7200 engines. [...] they are the first in the world to have a thrust reverser with an Electric Thrust Reverser Actuation System (ETRAS®). 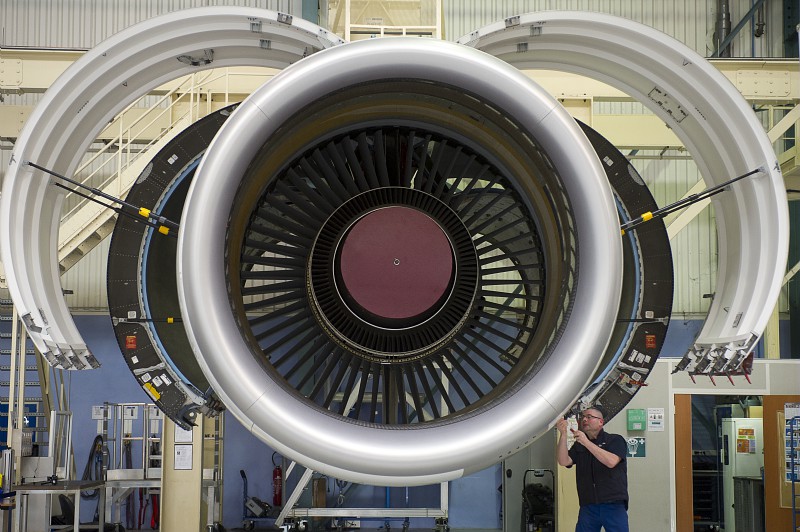 Are the nacelles interchangeable?

No, the nacelles for the outer engines are different from the inner ones to save weight. This article says:

Four nacelles were developed for the A380: one inboard nacelle (with a thrust reverser) and one outboard nacelle (without), for each of the type's two engines, the Rolls-Royce Trent 900 and Engine Alliance GP7200.

As ymb1 pointed out in the comments, this is confirmed by the type certificate for the Trent 900:

Airlines normally maintain what are called Engine Build Units (EBUs) in their spare engine pool. The engine will be pre-assembled up to the point where variations in position on-wing have to be accounted for. Components beyond that point are only installed at the time the engine is installed on-wing.

Designers try to minimize engine "handing", mirror image configurations of things like plumbing, heat exchangers, etc, so the EBU can be built up to the most complete assembly possible, ready to be slapped on in a crisis.

On something like the 380, to the extent that reverser related components can be installed on the EBU, the airline will probably have a choice of:

The choice will be based on a global cost business case.

32
Why doesn't the A380 use its outboard thrust reversers?
14
Components on engines, are they removed or blanked out?

10
Is there a real risk of ingesting FOD into jet engines when using thrust reversers?
53
Can the Airbus A380 safely fly with two engines out on the same wing?
46
If airplanes can't use reverse thrust in flight, what am I hearing?
14
Components on engines, are they removed or blanked out?
4
How is an Airbus A380 fuselage joined and fastened together?
8
Why is the A380’s with-reversers stopping distance the same as its no-reversers stopping distance?
6
Why did the Mercure use cascade-type reversers?
2
Are aircraft certified for inflight thrust reversal required to demonstrate controllability in an asymmetric-reverse-thrust scenario?