What are the abilities and limits of a hexapod-based flight simulator? 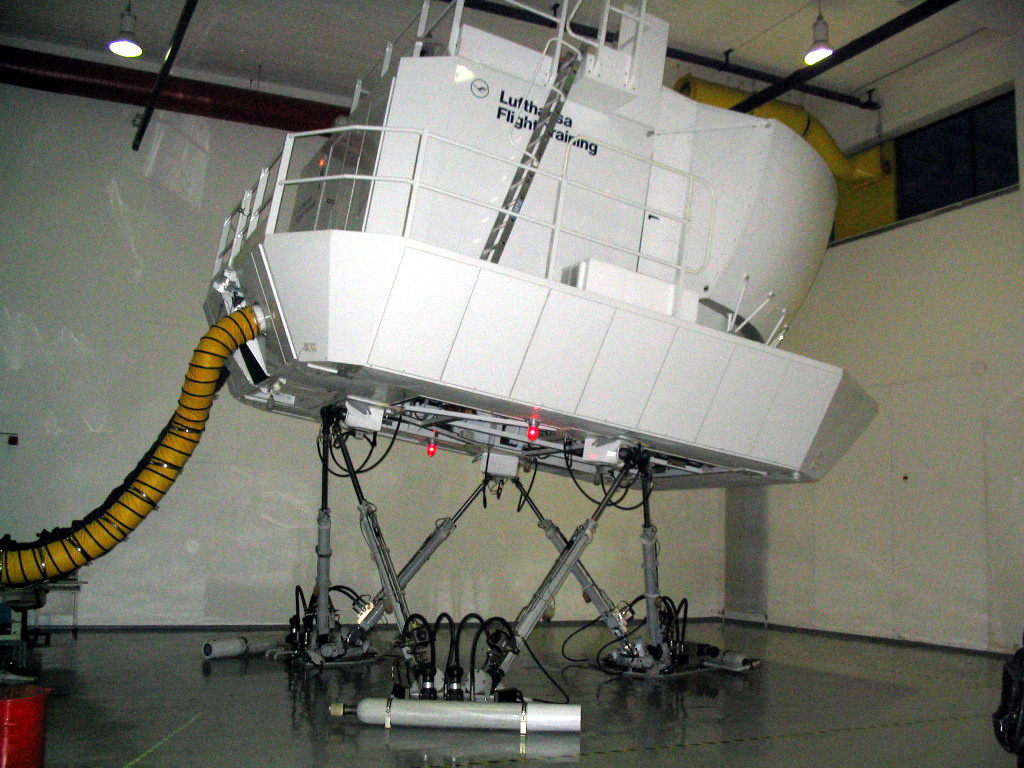 So, that's a professional hexapod- a. k. a. Stewart platform-based flight simulator (image source: Wikipedia - "Stewart platform"). By moving the simulated cockpit, it simulates the movements of a plane during its maneuvers.

But the range of maneuvers it can realistically simulate is certainly limited - it can certainly simulate a straight flight, but I doubt it can give its occupants the realistic impression of a full barrel roll.

Given an existing, recent (i. e., modern and advanced) siulator for commercial aviation:

What are the actual limits on maneuvers and their parameters (i. e. turn and turn radius, banking and bank angle)?

Bonus question: How does this compare to the flight situations encountered in a typical flight?

Motion software contains a lot of fine balancing and frequency filtering code, to make optimal use of the available stroke and of the peculiarities of the inner ear acceleration sensors. Large stroke systems are essential for pilot-in-the-loop tasks in airliner and helicopter pilot training, and make the difference between being in an immersive simulated atmosphere, or being aware of the fact that you're inside some device firmly on the ground.

It's not restricted - the sim will continue to move through any maneuvers - but realism degrades the further away they get from zero.

Full-motion simulators don't map motion 1:1, but rather trick the senses. Maneuvers are performed with velocity and acceleration. What the human body senses is acceleration. And what the brain processes most actively is jerk - the rate of change of acceleration.

So that's what you do. The sim cabin jerks almost as much as a real plane, but the acceleration ceases sooner than it would in reality, and where the real plane would've been stable, the sim cabin will gradually return to its neutral point.

The effect of motion on a collimated surround display is immersive enough that first-time visitors often mistake a simple static sim for a motion one. Actually adding a bit of motion, then slowly returning it to neutral after every maneuver, completes the illusion.

You don't have to simulate the entire motion, just hint at it enough to corroborate the information the pilot's brain gets from the picture.

64
Why does it feel like a plane accelerates just before touching down?
23
How "full-motion" is a full-motion simulator?
6
Is it really cost effective to put a motion system underneath a Full Flight Simulator?

20
What are the differences between various simulator levels?
14
What flight simulator software did Captain Zaharie Ahmad Shah use?
7
What is the ratio of actual flight time to simulator time on type for airline pilot training?
7
What hardware and software is needed to put together a basic flight simulator?
6
What happens if the pilot tries to do a loop in a full-motion simulator?
0
What types of data can be extracted from a non-motion flight simulator?
31
Do Flight Simulation Instructors stop the simulator before a simulated crash?
8
What is the lifespan of a level D simulator?