Would building an airport at 30,000 ft save money?

So... this would obviously cost a ton of money initially, but long-term, I believe the savings both environmentally and financially would be returned many times over.

If a building can already be made to reach the clouds (as below), and that is a tall, slim building, then it would theoretically be possible to do the same thing but with a huge, wide building (i.e. an airport). Now, I'm not saying it could reach 30,000ft (or could it?!), but even if an airport could be built (complete with runway) at 10,000ft, the massive savings in takeoff would be returned on the initial outlay.

Aircraft would simply roll off the runway and would already be at cruise, or only have a small, gentle climb to cruise. It would probably look like an aircraft carrier, just... really high.

Is this possible? If yes, why hasn't it been done? 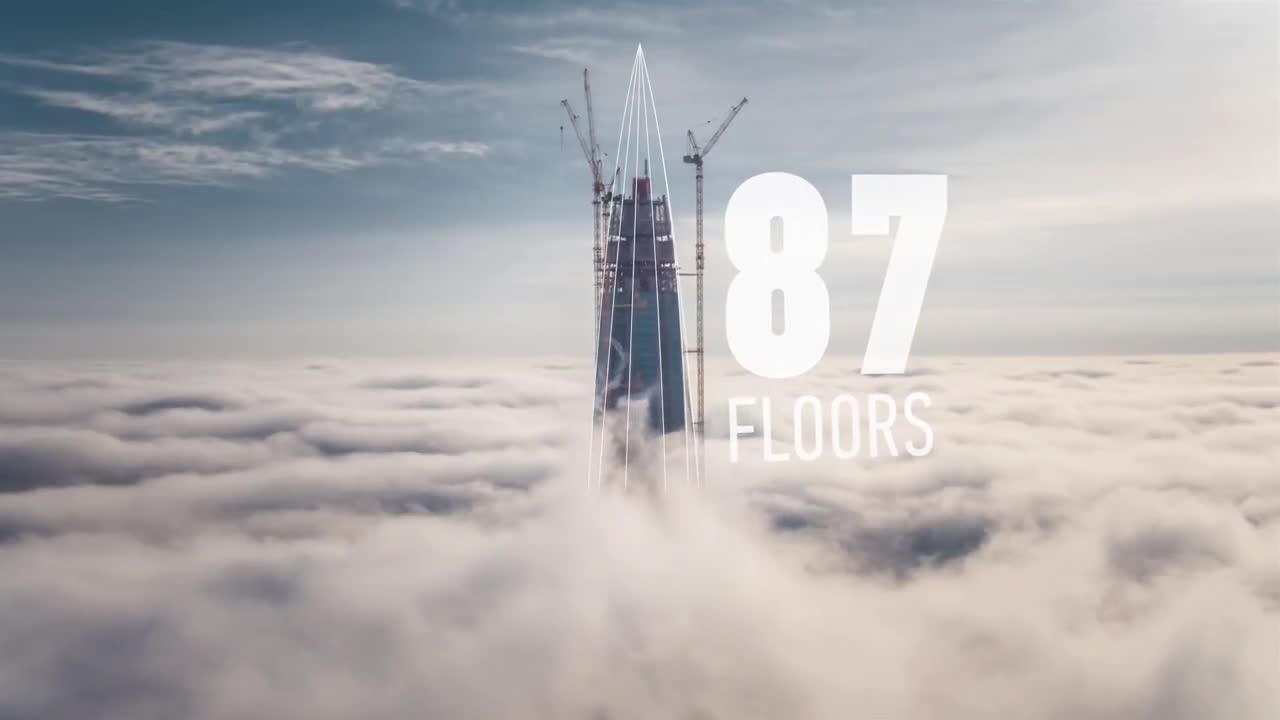 The Burj Khalifa in Dubai is currently the tallest building in the world. It is 828m (2717ft) tall and cost about 1.5 billion US dollars to build. Putting all technical and logistical difficulties aside, let us assume one can build a similar structure to 10,000ft, so about a factor 4 taller. Since building cost probably scales with volume, this would make our new building considerably more expensive:

And that is just one small tip at 10,000ft. A whole runway would require a much larger structure. The runway itself would have to be considerably longer at these altitudes, because the air is thinner. This would easily put the total cost in the trillion dollar range.

How much fuel is actually saved by this? This answer says a Boeing 737-800 requires about 2300kg of fuel for takeoff and climb. Even a very generous assumption of saving 2t of fuel per takeoff from this airport would only save $1200 at current jet fuel prices per takeoff. London Heathrow had about 475000 movements in 2018 (takeoffs and landings). Assuming similar traffic, it would take

to pay for the investment (and this is a very generous calculation).

How long would it take to recoup the billions (tens of billions?) of dollars it would cost to build a tower even as little as 10,000 feet high? Millions of flights, if it saves a thousand dollars per flight -- and I strongly doubt the saving would be anything like that large.

Worse, if you could build to 30,000 feet (and for a tower a couple miles long, I don't doubt it's possible) passengers wouldn't just need oxygen masks to get from terminal to aircraft, they'd need a pressurized boarding ramp. Apron personnel would need full pressure suits, tugs and luggage tractors would need a complete redesign -- and operating costs of the terminals would likely increase by much more than the saving in fuel (not to mention the runway would have to be much longer, as stall speed at 30,000 is significantly higher -- in ground speed -- than near sea level.

Generally, airports are better near sea level, because the higher the altitude of the field, the faster the aircraft have to land, the longer it takes (in time, and moreso in distance) to accelerate to the increased rotation speed. Far from saving money, flying out of, say Denver as opposed to, say Miami costs more -- because the runways have to be longer (and if it's hot in Denver, they need to be longer yet).

tl;dr Being able to lift off slow and land slow are more important that the small saving in climbing through 10,000.

The potential for savings is not there.

Most of the fuel spent on climbing is not wasted. It's recouped back in the descent, which is performed at very low thrust. An aircraft's combination of kinetic and potential energy is a perfect energy storage system.

The only major losses of energy added by the climb-descent cycle are those from the added friction drag of passing through denser air. These are fairly small compared to the overall flight's fuel consumption.

Starting at 30,000 ft, you still have a takeoff to perform. The airplane will need to accelerate, to a higher velocity than normal, to stay in the air and be able to perform a go-around if necessary. At the end of the trip, the plane still needs to bleed airspeed, although less of it.

Meanwhile, there's lot of reasons not to place an airport at 30,000 ft. High altitude airports are much more dangerous compared to normal ones. High winds, high approach speeds, limited runway length combine to that. Part or all of the money saved in fuel would be compensated for by the losses from the increased crash rate.

To compensate for the increased stall speeds, high-altitude airports need longer runways than usual. The currently second-tallest airport also features the longest public runway in the world. High airports also place restrictions on takeoff mass, which means you'll sometimes have to use heavier aircraft at reduced load (e.g. A330 instead of A321) to meet your range and capacity requirements, which wastes much more fuel than low-altitude climb does.

So even if the height itself cost nothing, you wouldn't want to build your airport as high as possible. For a combination of safety, efficiency and cost reasons, you'd still want it on the ground. The extra energy cost from drag would be more than compensated for by the ability to take off at full weight, meaning that routes can be served by smaller, and often with reduced takeoff thrust.

About the only serious reason to place the airport very high would be for noise abatement.

Not the answer you're looking for? Browse other questions tagged takeoff fuel commercial-operations airport-design or ask your own question.

14
What would be the challenges to taking off and landing a typical passenger jet at FL300?
6
How much fuel is used for the different phases of the flight of a typical airliner?

13
Are zero visibility landings a possibility for the future of commercial aviation?
2
What is that building in Suvarnabhumi Airport?
6
Does closing window shades save fuel?
7
Is it practical to use ground effect to extend range in an emergency?
6
Under which conditions is full rated power instead of METO power required for takeoff (DC-3/C-47 with Pratt&Whitney 1830 twin wasp engines)?
3
Has this "straight through" airport design ever been contemplated?
33
What is the purpose of a walled area in the vicinity of Heathrow Airport?
6
Why do heavy departures wait 5-10 minutes on the runway at ZRH?
14
What would be the challenges to taking off and landing a typical passenger jet at FL300?