Are thrust levers synchronized by default when pushed/pulled? [duplicate]

When I watched this video about the last flight of Juergen "J.R." Raps from SFO to FRA in an A380 (before his retirement) I noticed he lines up or synchronizes the four thrust levers as shown between 08:05 and 08:20 (while taxiing, if that matters). 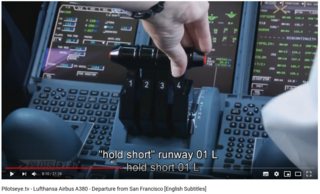 I used to think the levers are synchronized by default (same precentage of thrust on each engine) and it isn't crucial to have the levers in a straight line as long as the difference between their positions is below a reasonable amount. I further thought that in case the thrust needs to be distributed asymmetrically for whatever reason (say 70% board and 60% starboard), one would need to press some button on the levers to release some sort of lock and move them separately instead of simultaneously.

I personally would find it hard to move four levers simultaneously at the same angle, let alone people with small hands who may only grab three of them at once.

So how does it work? Or is the pilot's behaviour just a personal habit?

On a non-FADEC engine (older airplanes - not this one) where the thrust levers are connected to the engine fuel control units with a cable circuit or a teleflex cable, you have to manually adjust each lever to wherever it has to go to achieve a given N1 (fan speed), and this can result in small variations in position of each lever when all engines are at the same power setting. On takeoff on a non-FADEC, you move the thrust levers until power is reasonably close to take off thrust, call "set thrust", and the non-flying pilot tweaks each lever to synchronize all 2 or 4 N1 values to the takeoff bug setting on the N1 indicators. With mechanical controls, the thrust levers may or may not be perfectly aligned when the engines themselves are in synch (there are limits to the misalignment allowed).

On a FADEC aircraft like the 380 in the video, the engines are managed by computers, and the thrust levers are just electrical input devices. At the bottom of each lever there are Rotary Variable Displacement Transducers (RVDTs), that tell each engine's FADEC computer where the thrust lever is. The FADEC will manage the N1 and if all 4 levers are at the same position, each FADEC will achieve the same N1 (within the tolerance of the RVDT's signal).

For takeoff, to make it easy, there is a detent for each lever at the Takeoff Go-Around setting (TOGA) that you can feel as you move them up (a little roller drops into a depression on a cam profile on the lever's arc of rotation). There is another detent for climb power as well (CL) to avoid having to fuss with lever settings during the departure. When in the TOGA or CLIMB detent, the FADEC computer takes care of setting its engine's computed takeoff or climb power automatically. So on a FADEC engine, when you take off, you just push the levers until you feel each one click into its TOGA detent, call "set thrust", and the non flying pilot just looks at the N1 indications to confirm they are all at TOGA thrust, without having to tweak the thrust levers (on the RJ I used to touch the levers below the handles as the PF was pushing them up with my finger and thumb to feel for myself that the levers clicked into the detents, although it wasn't really necessary).

At settings other than TOGA or CLIMB thrust however, they tend to work like mechanical thrust levers, where if one lever is at a different position it will have a different N1 value, so at intermediate power settings or on approach you have to individually align the levers, so you end up moving them as together as best you can and fine tuning as required.

What the pilot in the video is doing is synching the levers for taxi because when he pushed the levers up he didn't push them evenly and it looks like the outer ones were a little farther ahead than the inner ones. Not that big a deal for taxi; he's just being a perfectionist.

No, the thrust levers are not automatically synchronized. You could set one engine to 100% and the other to full reverse thrust, just by moving the levers.

Having said that, there are some airplanes that kind of do what you're talking about. For instance, most Airbus designs have detents in the throttle position which basically tell the computer to take over adjusting engine thrust. In the video you linked, at 13:57, the pilot just shoves the throttles into the "Takeoff/Go around" detent, trusting the computers to synchronize the thrust of each engine. Also, a lot of multi-engine propeller-driven airplanes have a synchronization system that keeps both engines at the same RPM, because having two propellers at slightly different speeds creates this pulsing drone sound that a lot of people find annoying. But each of these has to be specifically selected by the pilot, there's no automatic synchronization between engines.

Not the answer you're looking for? Browse other questions tagged flight-controls airbus airbus-a380 thrust or ask your own question.

9
Why isn't there some optional setting that can precisely move thrust levers jointly?

22
Why are Airbus captain control sticks placed on the left when most people are right-handed?
2
What's the thrust coefficient for a convergent nozzle?
3
Why does the thrust limit page display the thrust in percentage (« % ») and not in pound-force?
9
Why isn't there some optional setting that can precisely move thrust levers jointly?
0
What are the criteria for conceptual design of thrust reverser in the use of braking?
1
What is the thrust balance between compressor and exhaust nozzle for a turbojet engine?
5
Can Flex thrust be lower than climb thrust?
0
Does thrust output in jet airplane remains constant when altitude increases?