How does gas turbine efficiency compare with supercharged piston engines?

If an aircraft mounted the exact same propeller on a supercharged piston engine and a turbine, and flew under identical conditions at the same pitch and rpm, how much more fuel would the turbine use (possibly including weight savings benefits for extra credit).

I am picturing a two engined aircraft with the two types of engines flying side by side at around 350 knots.

The most efficient IC engines are large Diesels. At the extreme end are ship engines with better than 50% thermal efficiency resulting in a specific fuel consumption of only 0.260 lbs/hp/hour or 158 g/kW-h. But even supercharged truck diesels achieve above 40% thermal efficiency at high load (this NHTSA study gives 42%).

Aerodiesels have achieved 220 g/kW-h already with the Jumo 204 and 205 of the early 1930s. Even the modern Thielert diesels (now sold by Continental) are hardly better, claiming 214 g/kW-h. Also the Napier Nomad, a super- and turbocharged aero diesel with utmost efficiency as its design goal just reached 219 g/kW-h.

Gasoline engines start at about 240 g/kW-h; this value is achieved by the Lycoming IO-390 with fuel injection. Without fuel injection, specific consumption rises to 260 - 280 g/kW-h which is typical for a Lycoming O-360 at 65% power. Note that the Jumo 213, one of the more efficient WW II-era piston engines, already achieved 260 g/kW-h even with 87 octane fuel and a compression ratio of only 6.93:1 at its most favourable operating point. Advanced Innovative Engineering, who have taken over the Norton-Wankel engine, claim 310-350 g/kW-h for their 650CS with 120  PS.

Comparing that with turboprops needs some conversion of thrust into power. This is only valid for a specific flight speed. If you do that at cruise speed, the large turboprops Progress D27 and Europrop TP400 claim a consumption of around 240 g/kW-h. Smaller turboprops rarely achieve below 300 g/kW-h.

To save you from the trouble of looking up and converting the data in the last link, here is a selected list:

Please note that those turboprops feed on kerosene while the piston engines need gasoline. But by basing the comparison on a per-mass basis, it is valid because the energy densities of both are almost identical. Very large turboprops are as efficient as gasoline piston engines, but diesels still have a small advantage.

Now for turbofans. Here we have thrust which needs to be converted into power first by multiplying it with flight speed. It would be nonsensical to compare the static case – here by definition turbofans do not produce power. For the nitpickers: Yes, I need to look at the gas speeds ahead and behind the engine, but still, this makes for a poor comparison: Most static values are from test stands with all accessories removed and no losses for engine mounts and fairings. I will instead use the figures in cruise given in this answer, using a fuel burn of $b_f$ = 18 g/kNs and a speed of Mach 0.78, which equates to a flight speed of 262 m/s in 11.000 m altitude. Multiply by 3600 for a per-hour value and divide by 262 (the N are in the denominator!) and you arrive at 247 g/kW-h. So again, very similar to good gasoline piston engines but not as good as diesels.

But again this comparison has to be taken with the proverbial grain of salt. Now we need to have a closer look at speed. Thrust-specific consumption goes up with speed and roughly doubles between the static case and cruise speed for a modern turbofan. The GE-90 achieves 8 g/kN-s static and 15 g/kN-s at Mach 0.8 – that would be just 209 g/kW-h and be on a par with the best diesels. For comparison: The installed figures for modern military engines in supersonic aircraft are 20 g/kN-s. And regarding the fuel-hungry turbojets: The old Jumo 004 achieved 39 g/kN-s – just twice as much with a compression ratio of only 3.3:1. Real fuel guzzlers were the Argus 014 of the V-1 with 107 g/kN-s in cruise.

While turbine engines gain in efficiency with altitude due to colder intake air, the diagram below comparing the Jumo 213 A with the J version (source) shows an increase in power specific fuel consumption with altitude. Note that flight speed will also rise with altitude and is not given, so I suspect this is more due to higher speed than higher altitude. Again, these are real-world data from flight test with the engine installed in a FW-190D (source). Going from sea level to 10 km which roughly doubles true air speed raises the specific consumption by 20%. 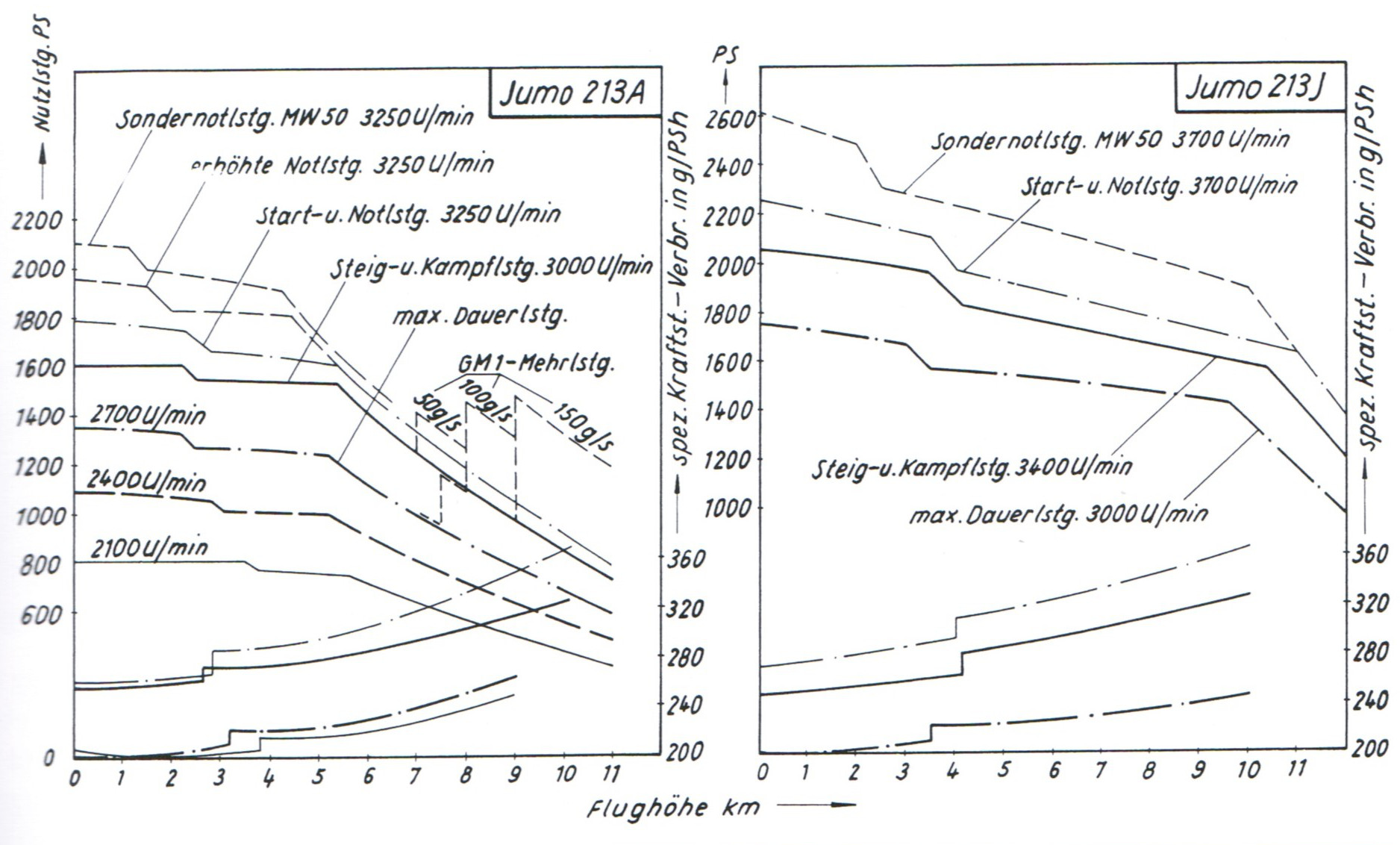 Comparison chart between Jumo 213 A and J. Flight altitude is given in [km] along the x axis and specific consumption along the right y-axis. Multiply by 1.34 for g/kW-h. The lower set of lines are for partial load operation between 2100 and 2700 RPM (A version) rsp. 3000 RPM (J version) while the upper set of consumption lines are for maximum power operation at 3000 RPM (A version) rsp. 3400 to 3700 RPM (J version), partially with water-methanol injection.

When looking at conversion from chemical energy into mechanical energy: very favourably. The early turbojets had low thrust efficiency, they could not convert their gas generator power into thrust in an efficient way. When comparing energy efficiencies we start with the chemical energy in the fuel, and won't be working backwards from available thrust.

If all gas generator power is converted to mechanical energy we're talking about turboshafts. The best way to compare the fuel efficiency of the engine only and not get engaged in a discussion about thrust conversion, is a listing of engine brake horsepower, which directly measures the shaft torque1 applied to a propeller, fan, set of truck wheels, ships propeller etc.

The low specific fuel consumption is for large gas turbine engines, they don’t scale down well because of the boundary layer effects: a smaller engine has relatively a larger circumference. Also, they only operate efficiently at full power, piston engines have the advantage at lower rpm percentage.

So the smaller the engine, the more advantageous are the circumstances for the piston engine: they scale down much more favourably than the gas turbines. But given enough volume, gas turbines are not inherently wasteful with fuel at all.

If an aircraft mounted the exact same propeller on a supercharged piston engine and a turbine, and flew under identical conditions at the same pitch and rpm, how much more fuel would the turbine use

We're taking about aero engines now, and should leave unsuitable 2-stroke low RPM ship diesels out of the comparison. Also, since the propellers and flight conditions are identical, we can leave the whole thrust conversion mechanism out of the equation. As mentioned earlier, size matters when talking about gas turbine efficiency. Let's take 2 sizes:

It is hard to find equivalent piston and gas turbine engines for a fair comparison:

1: The gross power delivered by the engine is the torque Q at the shaft times the angular speed $\Omega$. This is the pure engine power, the Shaft(!) Horse Power of piston engine specifications. To measure the gross shaft power, connect an eddy current damper to the output shaft and measure the amps required to run at constant $\Omega$

Very poorly actually. What saves turboprops and turboshafts is power to weight, smoothness and reliability. If you want just maximum MPG and don't have to go trans sonic, recip wins hands down.

Piston engine Specific Fuel Consumption is roughly .45 lbs/hp/hr for a normally aspirated carbureted engine (that figure comes from my own Lycoming engine's power chart - I can't find an on-line source), going down from there with fuel injection, and turbo/super charging. Diesels are in the low .3s.

The most efficient recips were the Wright Turbo Compound radials that had both supercharging and direct horsepower extraction from the exhaust (about 300 hp was recovered from the exhaust of the R3350 by the two power recovery turbines) that were down in the high .3s to .4.

Turboprops? Worse than two stroke gasoline engines. Somewhere around .6 lb/hp/hr or worse (the PT-6 is .67), maybe in the high 5s on some of the latest.

This is one reason why you don't see that many turbine conversions on airplanes like the DC-3. Aside from the cost of the conversion, it's just way more economical to run, fuel wise, on gas.

Very well as the Carnot efficiency is what drives the theoretical limit, and that is driven by the temperature of the combustion. 1 - T_h/T_c (in Kelvin) Turbines have very hot combustion chambers (diesels too, gasoline less so (due to knocking)).

So a turbine operating in cold air will have great performance.

In electricity generation Natural Gas turbines combined cycle (CCGT) GTs that are coupled with a steam turbine achieve 60%+ efficiency. Turbines only (OCGT) have lower efficiencies (34%) but that is also because they are optimised for faster response to power prices.

Not the answer you're looking for? Browse other questions tagged aircraft-performance turboprop or ask your own question.

69
Why do jet engines get better fuel efficiency at high altitudes?
38
Why increase the number of cylinders in an engine instead of increasing their volume?
24
In what way are the Concorde's engines considered efficient?
16
Can the plane Celera 500L be eight times more fuel efficient than a jet of similar size and capacity?
10
How can I calculate the fuel consumption of an Airbus 320-200 at various loads?
6
Why aren’t diesel piston engines used on aircraft like the Saab 340 or L-410?
17
Which jet engines have the highest thermal efficiency?
10
If the efficiency of a turbofan engine is 35%, where does the rest of the fuel energy go?
2
How is take-off power defined?

5
How does the Pratt & Whitney Canada PT6 differ from other turboprop engines?
21
Why the lack of faster piston-powered planes?
10
How does the efficiency of a piston aircraft change with altitude?
2
How does supercruise thrust compare with static thrust ASL?
0
How to compare turboprop engines and with which values?
3
How does maximum speed vary with altitude?
0
How do engines cope with various intake airflow speeds?
1
Why isn't Vy lower than the speeds for best L/D ratio and best glide ratio in an airplane with a piston engine and a variable-speed prop?