What sort of sensors are used for sensing the positions of the control surfaces for the ECAM F/CTL page on Airbus aircraft?

During the pre-flight flight-controls-check how does the ECAM F/CTL page report on the actual positions of the control surfaces?

What sort of sensors are these? Is it a proximity sensor?

This is motivated by this related question about pre-flight flight-controls-check:
Testing control surfaces pre flight; what feedback does pilot recieve?

For those moving parts that are required to be positioned anywhere within a given range, such as the control surfaces of an aircraft, you need a sensor (aka transducer) that can accurately measure the position of the part at any point within that range, not just at the ends. As already mentioned, the device of choice is the linear variable differential transformer (LVDT), or its rotary variant RVDT.

For example, this is the schematic of a yaw damper servo actuator of an Airbus A320: 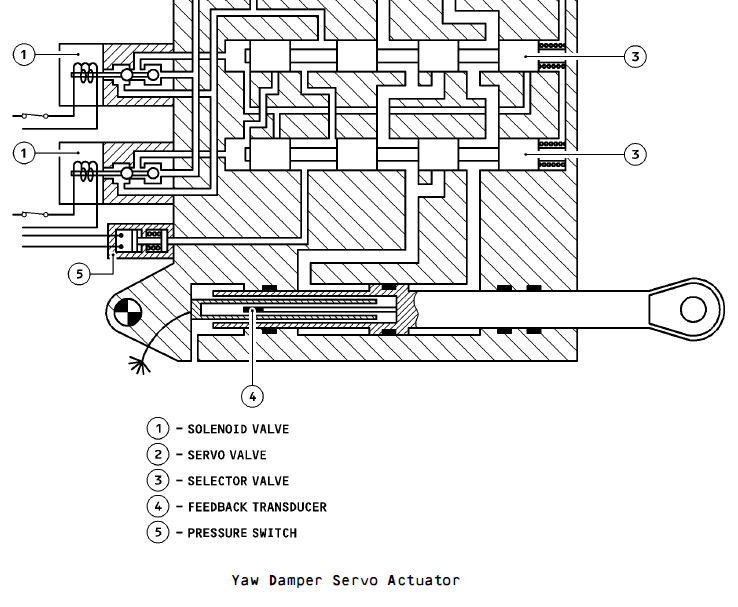 Element No. 4 is an LVDT that measures the displacement of the actuating rod attached to the rudder. Similar devices are used for ailerons and elevators. The elevators also have an additional RVDT fitted directly onto the elevator's torque tube, in addition to the LVDT part of the servo control.

Most aircraft I know use either linear transducers LVDTs or rotary transducers RVDTs for this purpose.

Not the answer you're looking for? Browse other questions tagged flight-controls avionics airbus sensors or ask your own question.

9
Is trimming aircraft to relieve pilot of applying force on control stick/Pedal still applicable?
8
Do the captain's and first officer's rudder pedals always move together?
2
How many angle-of-attack sensors does the Airbus A 320 NEO have?
10
In an aircraft with tab-flown control surfaces, how can a jammed surface be detected during preflight examinations or flight control checks?
5
Why did fly-by-wire systems take so long to implement?
6
Why are the positions of an aircraft's angle-of-attack vanes dependent on airspeed?
3
Where do the forces exerted on flight yoke/stick comes from and how do they vary with flight conditions?
5
Where is the control loop of the actuator closed?
10
Why shouldn’t the A330/40’s speedbrakes be used in alternate law?
6
How are the 737’s elevator and aileron cables attached to their control tabs without impeding the control surfaces’ motion under hydraulic power?