How can I get 'lead point' for aircraft to intercept final course? 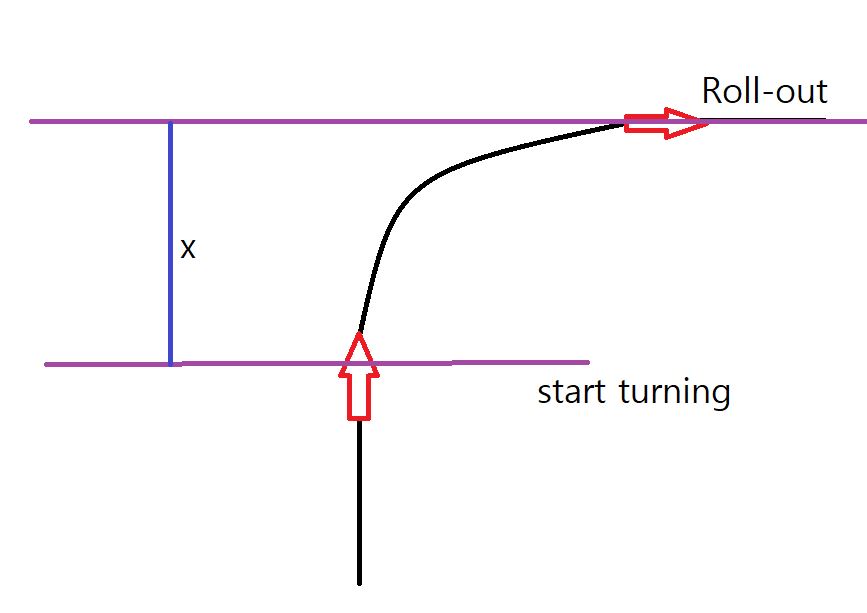 As controller, I always wonder when should I instruct aircraft to turn. The aircraft does not turn at right angles as soon as instructed, but rather has turning radius. So, I tried to find the formula but failed.

If speed of aircraft is 300 kts, and he is instructed to make 90 degree, how long distance the aircraft need to turn? I make image, and I wonder the formula for 'x'

I was taught the following rule of thumb for providing a final vector to final, in the USA, using the STARS radar system which (when using ADS-B inputs) has a one-second update time:

Set the Predicted Track Line to 30 seconds. Vector the aircraft to a 90º base-to-final. When the PTL reaches the extended runway final, issue the Position-Turn-Altitude-Clearance. The aircraft should roll out on a good heading to intercept final approach course.

This is obviously at low altitudes and relatively low speeds, 230ish knots or below. Theoretically (because the method uses the aircraft's speed instead of a fixed distance) this method should work for any aircraft going any speed, but that may not always pan out. In particular, some military aircraft will be flying rather quickly on the base leg and slow down as soon as they get their dogleg turn-to-final, which could end up leaving them too far from final for a legal intercept.

I'm an engineer, not a pilot or controller, so wait for confirmation of my maths by someone who knows what they're talking about.

Not the answer you're looking for? Browse other questions tagged air-traffic-control approach or ask your own question.

48
How can I politely remind ATC that I'm waiting for instructions or clearance?
13
What is the procedure when being vectored for an approach and ATC allows you to pass through the final approach course?
12
What is the correct traffic pattern at a towered airport?
24
Which map projection is typically used on ATC radar screens?
8
When/where must a flight go missed on the JFK VOR/GPS 13 L/R approach?
8
Why do ATC instructions to change level include the words “climb” or “descend”?
4
What are ATC's considerations when they instruct to intercept final approach course instead of simply clearing for approach?
9
Who has the responsibility to make altimeter corrections in cold temperatures?
9
Why would a pilot on final to a towered airport not speak up when ATC clears another aircraft to land on the same runway, without mentioning them?
2
What did this ATC call mean?