How does fuel efficiency depend on wing configuration?

Which of the following wing configurations is the most fuel-efficient? 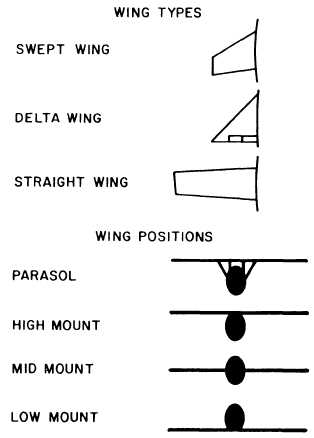 The largest losses on a wing usually occur at the tip, where high pressure air flows around the end from the underside to the top side. This can be minimised by making the wing longer and thinner, or tapering it so the tip is smaller. You can also add winglets to reduce tip losses, but they're tricky to get right.

If you fly near the speed of sound, you get shockwaves that cause a lot of extra drag. You can slightly raise the point where they become a problem by sweeping the wing, and wing sweep also helps to reduce the drag when you are supersonic - but supersonic is never an efficient choice.

Drag is proportional to speed squared, so if you just want to fly for as long as possible, it's most efficient to fly slowly. However if you want to cover distance it's more efficient to fly really high where the air is thin.

You can put all this together to get an airliner, with a long, thin, highly tapered wing (and winglets), flying so high that the air is only just dense enough to support it, and just below the speed that shockwaves cause extra drag.

You ask about wing position, and there is some interference drag where two surfaces meet. It is minimised by making the angle between the two surfaces as large as possible. Thus a mid-wing is slightly more efficient than other designs, but it's a relatively small effect. Wing position is usually determined by the undercarriage design and the pilot's field of view.

Short story long: the wing configuration itself has not so much of an influence, the position close to zero. It's about the aspect ratio: higher aspect ratio gives you a better glide ratio, thus reducing the power needed. Less power = less fuel consumption (at a given engine efficiency) = better total efficiency. You can also build an inefficient straight wing, let's say one with a quadratic planform.

Problem: large swep back angles (and particularly deltas) compromise aspect ratio geometrically - a 60° delta has given aspect ratio of 2:1 and also high swep back wings bear troubles. You can't build them too long without the position of center of lift becoming too far aft (you might attach them farther up front, but this is limited by the plane's nose... have a look at the B-52's wing attachement position for example). So for a high aspect ratio you need low or no swep back wings.

Yes, such planes are usually rather slow. But, while slightly off topic but related, there is another formula saying twice the speed = four times the energy (or so). This bears the bad news that speed is inherently inefficient anyway...

Not the answer you're looking for?Browse other questions tagged efficiency aircraft-structures or ask your own question.

20
Did any Boeing 787 operator achieve the 20% fuel efficiency improvement over the 767?
9
How is a 436 seater A330 fuel efficient?
8
How much efficiency gain can be attributed to aircraft handling?
9
How does the efficiency of a turbofan compare between take off speeds and optimal conditions?
3
Is turboshaft fuel efficiency affected by N2 loading?
1
How do you load test a wing rib?
4
How does wing bending relief of an a340 compared to an a330 allow it to carry 30t more fuel in a center section of nearly identical wings?
6
What passenger airplane has the lowest fuel efficiency?