What advantage might interplane-strut mounting offer to ailerons, on the Curtiss Model F?

Glenn Curtiss's 1912-1918 Model F biplane flying boat has large ailerons on the struts between the wings, not contiguous with any other flying surface. Did this aileron position have any advantage that either he knew of or that we now know?

[Per SupBruh's comment, contrast this position to conventional upper-wing position. Lower wing was rare even then, and particularly for a seaplane where an aileron this big would hit the water when deflected.]

He knew about wing warping, so he knew the effectiveness of camber (hinging an aileron at a wing's trailing edge) as compared to just changing an airfoil's angle of attack. He knew how to make a hinge: this aircraft uses them at rudder and elevator.

He also knew about modern ailerons: in 1908 he flew an aircraft with them.

Maybe he chose such a large chord for the ailerons to try to increase their authority. Photos suggest that the airfoil was just a flat plate, which stalls at a deflection angle much less than that of a conventional aileron. But the drag from a stalled aileron that big would produce scary adverse yaw.

Disclaimer: I can only speculate, having no direct involvement with the development of the Curtiss Model F.

Stick forces were not really an issue with the small and slow early aeroplanes. As both size and speed went up, they would become a design consideration first because the pilot strength is lowest for lateral motion of the stick or control horn. With more aerodynamic experience, elaborated ways of reducing stick forces were employed.

My explanation, therefore, is that this is an early attempt at reducing stick forces. Hinged at the trailing edge, the complete chord length of the aileron would be behind the hinge line and no offsetting moment could be produced. Also, being part of the wing, ailerons hinged at the trailing edge will float up once lift is created. This requires both ailerons to be interlinked with stiff control cables which again raises stick forces, now from friction. Also, this preload from lift limits the effectiveness of a downward deflection of a wing-mounted aileron.

The free-flying aileron, on the other hand, has the advantage of starting with a clean sheet, if you will: 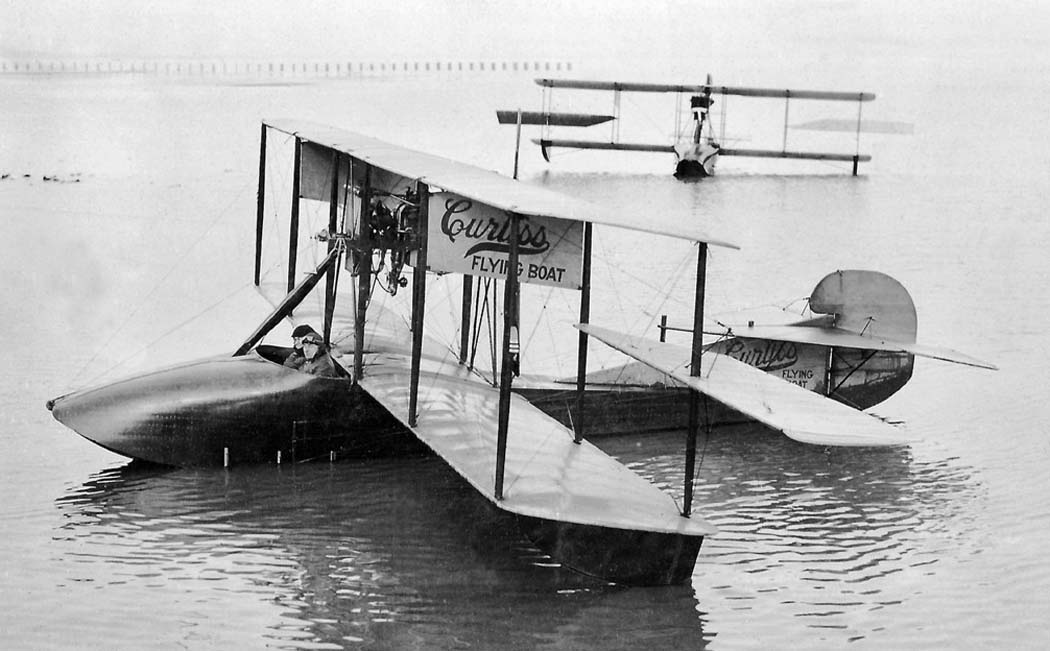 I would expect that the Curtiss Aerorplane Company tried out different hinge line positions, which is easily done with the inter-wing arrangement, and settled on the one shown above, because it reduces stick forces considerably but still produces a clear centering force, which is important for agreeable handling qualities.

I do not think that the inter-wing position would reduce wing flex: Lift forces from the aileron are introduced into the wing by the rear strut, so both torsion and bending are very similar to a wing with ailerons on its trailing edge. To reduce torsion, the aileron would have to be mounted on the forward struts. Then they would even warp the wing in a way supporting the intended rolling moment. I speculate, however, that Curtiss and his engineers maybe considered that option but were afraid of the resulting aerodynamic interference between wings and ailerons.

Not the answer you're looking for? Browse other questions tagged aircraft-design aviation-history ailerons seaplane or ask your own question.

18
Why does the yoke "stick" in a turning position?
11
Why was the engine of the Ju-87 Stuka not replaced with a more powerful one?
8
Why is there a difference between aileron upwards and downwards deflection angles?
4
What classes of aircraft require hydraulic flight controls?
3
What are the pros and cons of sealing the gap between the wing and the aileron?

15
What makes the ailerons on an aerobatic airplane different than the ailerons on a non-aerobatic airplane?
10
What is the benefit of spoilerons compared to ailerons?
7
What is the advantage of increasing an aircraft's horizontal tail surface area?
23
Would an aircraft with contra-rotating propellers longer than the plane's wingspan be able to fly?
9
What is the make and the model of this seaplane?
9
What advantage(s) are there for the HondaJet's engine mount position?
7
Why does the A320’s maximum allowable aileron deflection decrease, rather than increase, when the flaps are extended?
6
Why doesn’t the A320 have any provision for manual aileron trim?
4
What would be the advantage of a Puller vs. Pusher configuration on Embraer's new Turboprop?