Why does this Strikemaster have a textured leading edge?

I was at Duxford recently, and spotted a Jet Provost Strikemaster that had a rough texture applied to a portion of the leading edge of the wing. 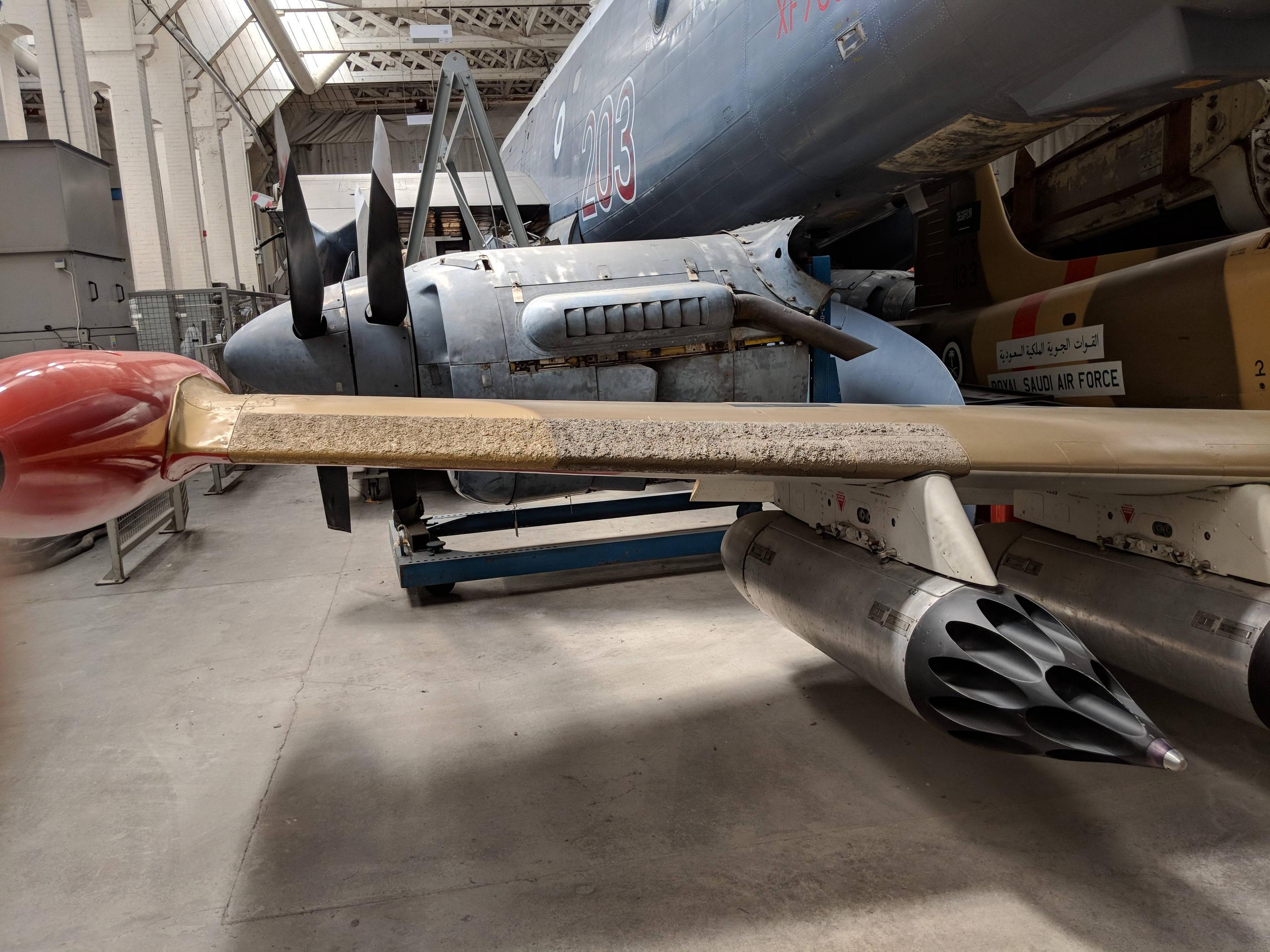 Why was this applied?

The leading edges are roughened to improve the stall characteristics. Typically vortex generators are used for this purpose nowadays.

The 5 and the 5a were used by the RAF for pilot training and the nose strakes were fitted to improve the spinning characteristics - the leading edges of the wings had a roughened paint finish to improve the stall characteristics. The 5s with the tip tanks (I'm not sure if 5b is an official or 'unofficial' designation) were used by the RAF for nav training and didn't have the nose strakes (not sure about the roughened wing leading edges) I don't know if it was because the tip tanks themselves improved spin handling or if it was because they weren't flown by studes for spin training.

The rough grey coating on the wing of the aircraft was applied in order to break up the smooth airflow and give an early indication of the onset of a stall as the T5's original clean wing design gave the pilot little prior warning.

A great deal of work has been put into stalling, spinning and stall-warning over the years of Jet Provost and Strikemaster development. This has led to all sorts of devices, like inverted-aerofoil tailplane, fences under intakes, strakes round the nose, roughened outboard leading-edges and little "eyebrow slats" at the wing roots. Of all these devices, the Strikemaster requires only the "eyebrow slats" to give it that precious smooth spin, a tidy g break in the stall and a distinct stall warning.

At first it was forecast that the T.5 would take the place of the T.4 on certain roles such as high altitude training. Unfortunately the majority of T.4s had to be taken out of RAF service much earlier than anticipated so the T.5 had to take on more responsibilities. As a result, the RAF decided to update its fleet of Jet Provosts with new avionics suites, spin strakes, and roughened leading wing edges in 1973.

I am a helicopter pilot (ex RN) but my original training was on aeroplanes (Bulldog at RAF Leeming 1979) prior to helicopters. The FTS at Leeming was operationg JP 3's & 5's.

My understanding of the rough leading edge on the outer part of the wing on the JP.5, I cannot remember if it was also on the JP.3, is that it was there to help keep airflow attached and give/maintain aileron control at lower speeds and therefpre high angles of attack (AoA) i.e. close to the stall. Ideally you want the inner part of a wing to stall first, as this will reduce the chance of wing drop and therefore the likelihood of a spin.

Many aircraft have other ways of trying to achieve the effect of aileron control at slow speed/reduce wing drop:

If any body reads this with proper aerodynamic knowledge and finds I have made some errors, created misconceptions, please correct, explain my errors.

I recently found AP.3456, now called the "CFS Manual of Flying", online (https://www.gov.uk/government/publications/foi-responses-released-by-mod-week-commencing-13-january-2020) and downloaded it.

Since writing my original comments, I have spoken with a former RAF QFI who instructed on Jet Provost 3's & 5's and he is in broad agreement with what I wrote. He cannot remember however for certain if the 5's had the "rough" leading edges when he was flying them.

I hope that the link above and the references may be of interest and help answer the "rough leading edge" question.

Not the answer you're looking for? Browse other questions tagged aircraft-design aerodynamics wing feature-identification bac-strikemaster or ask your own question.

18
What is a vortex generator?