Why did the Mercure use cascade-type reversers?

There are three main types of jet-engine thrust reversers:1

Turbojets and low-bypass turbofans generally3 use target or hot-clamshell reversers, as much of the engineâ€™s thrust (or all of it, for turbojets) comes from the core airflow, and said airflow thus has to be deflected forwards (along with the bypass air, if any) in order to produce net reverse thrust. In contrast, high-bypass turbofans, the vast majority of whose thrust comes from the bypass air and only a small portion from the core airflow, can get away with only deflecting the bypass air and leaving the core airflow alone (and thereby saving on maintenance, because jet engine core exhaust is really really hot and filled with delightfully corrosive combustion [by]products); as a result, they mainly use cascade or cold-clamshell reversers.

Enter the Dassault Mercure (an unsuccessful French jetliner from the seventies strongly resembling a longer, shorter-ranged 737-200), which used a pair of low-bypass JT8Ds, and, yet, if this photograph of a landing Air Inter6 Mercure is any indication... 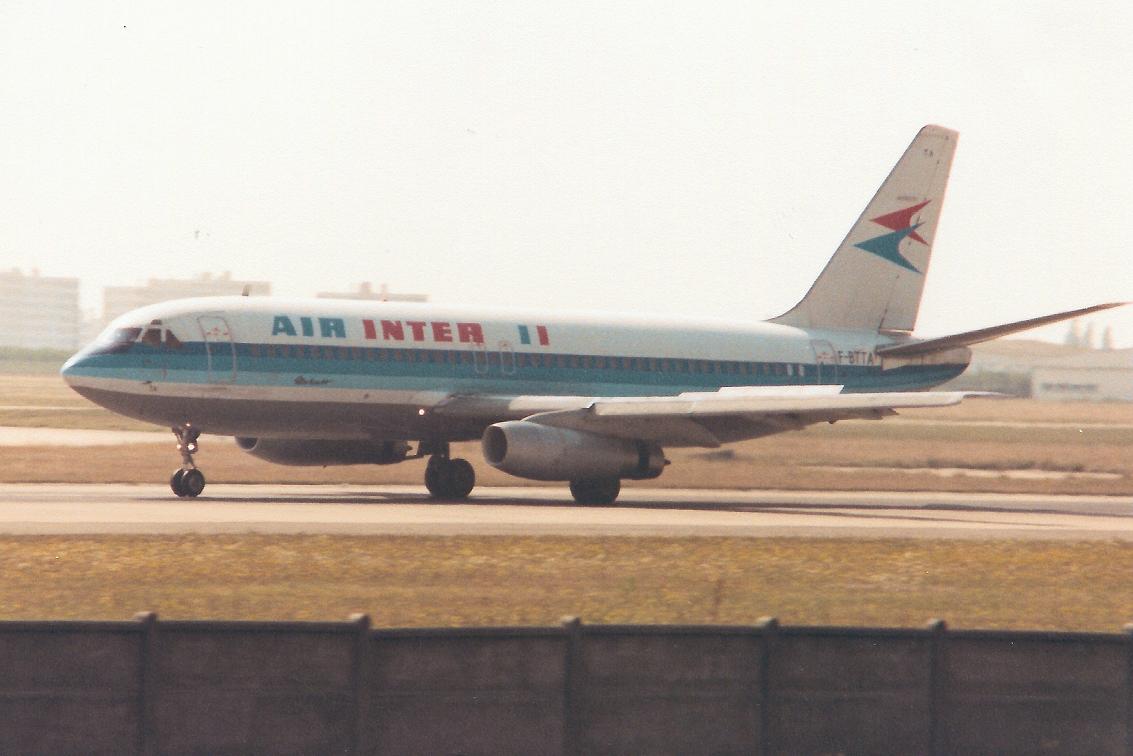 Iâ€™m having trouble seeing how this would work; for the engines to actually produce reverse thrust, rather than (an albeit diminished net amount of) forward thrust, would seem to require - for the reasons stated above - the use of target or hot-clamshell reversers, which redirect both the core and bypass airflow, rather than cascade or cold-clamshell reversers, which redirect only the bypass airflow.

What am I missing here? Did Dassault have some magic trick up their britches, were the Mercureâ€™s reversers meant merely to reduce the amount of forward thrust generated (and not to produce actual reverse thrust), or is that picture not what it looks like?8

1: For diagrams of the various types of thrust reversers, see the thrust-reverser tagwiki.

2: Low-bypass turbofans (seen on most narrowbodies designed from 1960 through 1980) have a bypass ratio less than 5:1, and generate the majority of their thrust from the engine core; high-bypass turbofans (seen on all widebodies except for one early Soviet design and on most post-1980 narrowbodies) have a BPR equal to or exceeding 5:1, and get most of their thrust from the bypass air.

3: For obvious reasons, I am ignoring jets that donâ€™t have thrust reversers (such as essentially all fighters, early Caravelles, the BAe 146,4 and the F28).

4: I am aware that the BAe 146 uses high-bypass turbofans; footnote 3 applies to all jets, not just turbojets and low-bypass turbofans, but I couldnâ€™t think of anyplace better to put it.5

6: The typeâ€™s only customer (Dassault sold them nine production Mercures, then refurbished the prototype and sold that to Air Inter as well).

7: (Image originally by Eric Salard at Flickr, via Dura-Ace at Wikimedia Commons; shrunken by me.)

8: Well, itâ€™s definitely a Mercure either landing or rejecting a takeoff (as evidenced by the extended spoilers), but maybe what appear to be cascade reversers arenâ€™t what they seem to be?

Did Dassault have some magic trick up their britches

It was an era of innovations. Have you seen the Vickers VC10 thrust reversers? The clamshell / target doors can be made internal within the nacelle. Literature is lacking on the Mercure, but there is a nice hint from a cutaway drawing:

The highlighted item relates to the exhaust cone, and it's labeled "Thrust-reverser cone." I will use a different patent (for now) for illustrative purposes only: 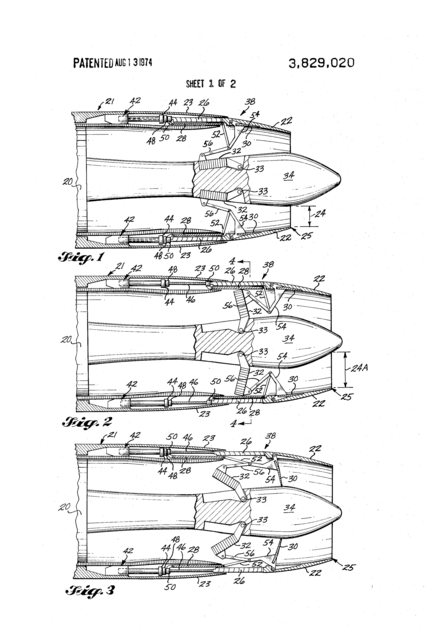 Above shows a nacelle that cascades, revealing vane panels to direct the gases forward, and blocker doors that pivot radially inwards.

The Mercure's thrust reversers were supplied by Snecma, now Safran, and indeed I found a Safran patent for a thrust-reversing cone of similar embodiment that was filed in 1974 (the year of Mercure's entry into service). It does not have cool drawings, but the text is clear:

The jet propulsion nozzle 7 is here of the needle or plug type, or in other words provided with a central body 30 [i.e. cone], and can be closed off completely by means of flaps (not shown) which seat (in the closed position) on said plug or central body 30. [emphasis mine]

Not the answer you're looking for? Browse other questions tagged turbofan thrust-reverser dassault-mercure or ask your own question.

2
Why do large civil airliners use cold rather than hot thrust reversers?

13
Why didn't early jetliners use turbofans?
4
Why did narrowbody jetliners take so long to switch over to high-bypass engines?
4
Why do the 737-100/200â€™s thrust reversers blow fully open if hydraulic pressure is removed while the reversers are partly open?
4
Does the P&W F100 turbofan engine of the F-16 really produce this much power?
8
Why is the A380â€™s with-reversers stopping distance the same as its no-reversers stopping distance?
2
What mechanism did the turbine reversers of early high-bypass turbofans use?
2
Why canâ€™t the newest high-bypass turbofans run at their EPR, temperature, and RPM limits simultaneously at sea level?
2
Are aircraft certified for inflight thrust reversal required to demonstrate controllability in an asymmetric-reverse-thrust scenario?