Note: not a duplicate of Can biplane or triplane designs be revived with modern materials?

This question compares a high performance triplane with high aspect ratios and high gap, to a monoplane. It does not explore materials engineering.

NOTE: With a gap of 2 chord, I understand the efficiency of multi wing aircraft is almost the same as a monoplane. see graph.

Instead of a heavy spar for a thin wing, you could just put the stabilator at the wing tips joining the 3 wings: so no extra wing strut interference drag ( expect for a small amount of extra interference drag at 2 wings roots).

NOTE: All this could only happen with a gap of 2 chord or more, where I'm told 2 wings act independantly without interfering with each other, just like a main wing and horizontal tail( which is a biplane of sorts)

Is this correct, at least conceptually?

In strictly forward flight probably, but what are you looking to gain?

You could make the mono wing have a higher aspect ratio and gain the same efficiency, all while being able to use a normal tail stabilizer and predictable flight dynamics.

There's only 2 disadvantages going this route. First the aircraft won't have as fast of a roll response because of the long wing span. Second the long wingspan may be harder to store depending on your ground operations.

But maybe you want to build an efficient aircraft that could land on public roads. So you need the wing span as short as possible while still being efficient, would your idea work?

Probably, but not without it's drawbacks. First how will you pitch stabilize it? If you use a conventional tail, you need to take your "2 cord" rule into effect for this "4th" wing. (I'm assuming for now that the 2 cord distance is correct, but I'll put my own thoughts in on this later).

Mono planes generate lift from 1 spot, pretty easy to predict where (where the wing is) and placing that wing just behind the center of gravity means the stabilizer tail doesn't have to produce much down force to keep the plane in stable flight.

However your center of lift will be moving depending if your the wind hits one of your wings in a different way than the others. You will also have to consider how you're going to make the lift of all 3 wings equal roughly the center of gravity.

Anything off of this mark and would have to provide enough down force to compensate, reducing efficiency.

Now my thoughts on if 2 cords apart is enough for a wing. It probably is in forward flight, but fluid dynamics are hard to predict and when that aircraft starts pitching up and down and the vortexes each wing generate get aimed in different directions your wings will interfere with each-other.

Take a look at the quickie aircraft. It was a "bi-plane" design similar to what you propose. Notice how the wings are not only far apart, but also on separate vertical levels. This is to help dampen pitch response, and give the wings more breathing room in non level flight.

Using this idea for a 3 wing aircraft seems even more difficult, as the more vertical distance your wings take up the less pitch authority you have. A little bit of dampening is okay, but too much and you can't pitch the aircraft.

You'll also notice the quickie doesn't use a normal tail stabilizer (because of the problems discussed above). So differing lift coefficients between the wings are used, but that does make the aircraft harder to fly in general. 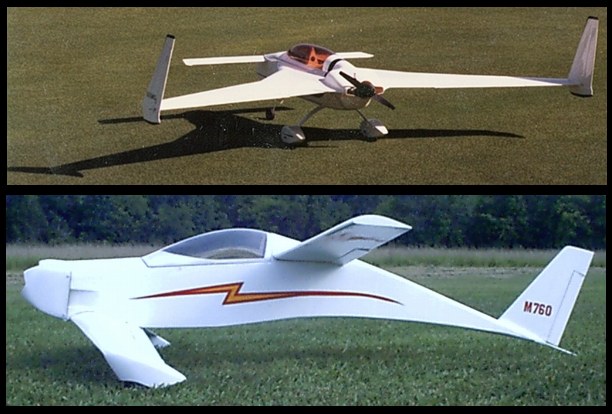 Anyway if you're really interested in this idea I'd recommend checking out the quickie project and learning what challenges/breakthroughs they faced/made.

First, while reduced chord does reduce induced drag, interference between the three wing surfaces increases it again. It's the span that matters more than aspect ratio.

Second, you've just tripled your wings' frontal cross-section. If your purpose is merely to stay aloft with minimal effort, that's not a big deal. If you're trying to get somewhere, though, the greatly increased parasitic drag will matter, more so the faster you fly.

Simply put, a triplane design is better for minimum gallons per hour and a monoplane design for maximum miles per gallon.

No. Even ignoring additional drag from wing interference, there's little or nothing to be gained by going to a triplane configuration. In the case of a vehicle with multiple wings, the effective aspect ratio of the vehicle is different than the aspect ratio of a single wing.

The induced drag of the vehicle strongly depends on span; aspect ratio is just a convenient dimensionless parameter to represent this. , If you keep the same wing area and don't change the span, the induced drag will not change significantly. This is the case with the triplane you describe.

For some intuition on why this is the case, remember that induced drag is an effect of downwash caused by wingtip vorticies, the strength of which is related to the total amount of lift the vehicle produces. This is related mainly to the vehicle wing loading $W/S$. Vehicles with large spans reduce this effect by moving the tip vorticies out further from the center of the vehicle.

In the case where you have the smaller wings, the induced drag of each is reduced by ~1/3 but you need to sum the drag from each wing into the total vehicle drag.

You can see this mathematically by considering the dimensional form of the equation for induced drag $D_i$.

This shows it's really the span loading, not the aspect ratio, that drives induced drag. Aspect ratio is just convenient shorthand.

Your approach indeed will work for very low cruising speed, providing more efficient lift with multiple higher aspect wings. This is exactly what soaring eagles, condors, and vultures have on their wing tips. These work great for slow circling flight while hunting an area.

However, these wings are speed limited, rapidly producing too much drag at higher speeds.

The albatross uses more speed and lower drag to generate adequate lift and migrate 1000s of miles. Notice the difference in their wings. The entire wing is longer and thinner, without multiple "winglets".

Study of these birds parallels evolution in aircraft design. Engine efficiency improvements and higher speeds at higher altitudes (also an advantage) has lead to the lowest drag mono-wing designs being most common.

But for walking speed free flight models, built light but strong, a thin undercambered very high aspect biplane is a delight to fly. They just have problems making any forward progress in a headwind.

No, because you now have three times as many wing tips.

Wing tip losses occur when high pressure air flows from the underside of the wing, around the tip to the low pressure area on the top. Increasing aspect ratio helps by reducing the amount of wing near the tip, but if you reduce the chord and increase the number of wings, you still have the same amount of wing area 'near' a tip and subject to tip losses.

4
Where can I find pictures of "endplate"?
1
Is it possible to design a GA plane with a 5' -10' wing span?
2
Would a triplane be way more efficient if the wings intersected at the tips to create one wing tip vortex instead of 3?
2
Cascading Wings: Do they really increase lift by 300%?
0
Will 3D wing has smaller drag than 2D at same AoA and airflow speed?
1
Do biplanes need bigger tail volume coefficients than monoplanes?
2
Why does the NASA X-57 need a "gust control system"?
0
What is the 'optimal' taper ratio?
1
Explained intuitively, why does aspect ratio affect induced drag?
4
Induced drag reduction from tandem wing