What will be the lift generated by the in-wing free spinning gyros in this design?

Gyrocopters feature a free spinning rotor that generates lift. In this design I have included four free spinning rotors inside the wing of a Cessna 172. Although it will not allow it to take off vertically, it should allow a slow take off and approach.

It all depends on how much lift is generated, how much the system will weigh and if there will be any controllability problems.

This is different from the Ryan XV-5A that had powered rotors in the wings. 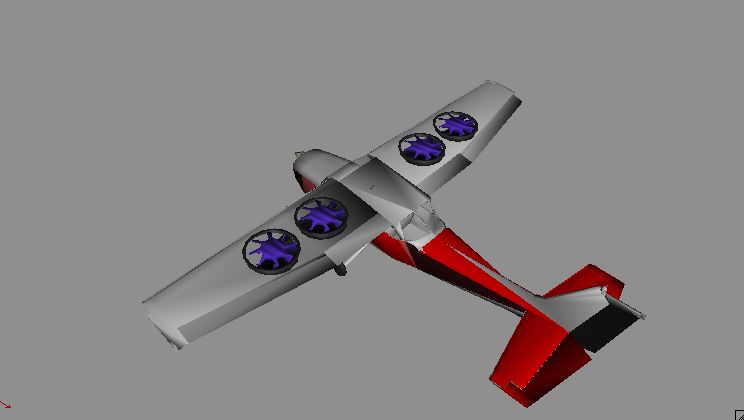 What you've come up here is a just holes in the wing, which will allow high pressure air from the lower surface to escape upwards. This will both slow the plane down due to extra drag and reduce its overall lift.

An autogyro's rotor is a wing in itself, deriving spin from forward motion, and then converting spin to lift. You don't get extra lift by putting a wing inside a wing.

An autogiro derives its lifting force from its rotor, which is not powered by an engine but by the airstream flowing in at a positive Angle of Attack: from a relative flow that is directed upward through the rotor disk. So to an extent, the autorotating rotor provides the same function as the wing surface that was cut for mounting the rotors.

How best to compare whether the effect of the rotors is positive or negative? If we look at the L/D ratios of autogiro and fixed wing, we can identify the following:

So fixed wing wins, hands down, by about a factor 2 - and that is for a large autogiro rotor which has much higher L/D than a small rotor. Plus, as @RonBeyer mentions in a comment, not cutting holes in the wing means that there is a convenient place to store fuel in.

41
What are the pros and cons of high-wing compared to low-wing design?
4
if temperature is increased but the volume contained in a area, will an air balloon lift?
62
What are the advantages of a Spinning Wing (Magnus Effect) and why haven't any been commercially produced?
52
What's the advantage of the F4U Corsair's gull wing design?
17
Why was the A380 built with a gull-wing design?
10
How has weight been reduced in commercial aircraft design and how will this trend continue?
15
What are the disadvantages of a delta wing biplane design?
5
Can this design provide more lift force than thrust from engine?
6
How does the wraparound wing design reduce drag?