Let's say you want to perform a turn anywhere from 1 to 90 degrees. Which will cost less energy? A bank or a yaw?

Using the rudder does produce extra drag, because the control surface is deflected for a time.

Using ailerons to bank also produce extra drag, but more than that, at a roll angle the lift direction will not be perfectly vertical. You will either lose altitude (that needs to be regained), or increase speed.

That's why I didn't want to phrase the question as "less drag". Lost energy could be in the form of drag, worse lift angle, lost altitude, maybe other things I haven't thought of.

I'm interested in large commercial aircraft as well as "ideal" aircraft with no adverse-torques (all control surfaces are aligned with the center of mass).

When you turn by yawing you are skidding the airplane to point the nose to the side, to offset the trust vector to move the plane sideways as it's going forward. The rate of turn you can achieve this way is very low and there is a massive drag of being in a skid as you slither around like a car on ice with the fuselage side presented to the airstream. To the extent that the airplane has a roll/yaw couple (roll caused by yaw) you will have opposite aileron to keep the plane from banking into the skid; more wasted energy serving no purpose.

When you turn by banking you offset the lift vector to move the plane sideways as it moves forward. There is no sideslip so the drag is only increased by the small amount caused by the increased elevator and AOA, and the minor drag of the moderately displaced ailerons and rudder (to the extent they are displaced at all once the rolling action is complete).

Because you are moving through a fluid, a skidding turn is like turning a car by drifting it on a dirt track, a banked turn is like going around on a banked corner, where you don't even have to turn the steering wheel to keep aligned with the road as the car changes direction. Which way is more efficient?

To find out I tried it on my own plane, a homebuilt PL-2. I flew it at 2000 ft, holding 70kt, close to max L/D for this plane, and applied full rudder with a bit of opposite aileron to maintain wings level (not much aileron is required on this plane), adjusting power to hold altitude at 70kt in the skid.

My plane has a manifold pressure gauge even though the prop is fixed pitch, useful for knowing precise power settings. It took 19" MP @ 1900 RPM to hold a skidding turn with full rudder at 70 kt and the turn rate was about 90 deg in 30 sec, or about Rate 1. This is about 55 HP on the Lycoming O-290 D2.

I then took out the rudder and banked into the turn (about 15 degrees bank was required to maintain Rate 1) to maintain the same rate of turn as the skidding turn but in a coordinated bank. To keep from climbing I had to reduce power. I ended at at about 16" MP @ 1700 RPM, in a banked level Rate 1 turn at 70 kt, which is somewhere around 45 HP.

So it took somewhere around 20% less power to maintain a banked turn at Rate 1 than a skidding turn at Rate 1 when flying near max L/D. The extra drag of the skid was also quite obvious in the deceleration when applying the skid with rudder vs rolling into the coordinated turn.

With airliners, turning by skidding is out of the question because with swept wings you get a powerful roll rate as soon as you yaw a couple degrees and you will quickly run out of opposite aileron trying to keep the wings level.

A constant turn requires a constant centripetal force, i.e. perpendicular to the direction of motion. This force has to be generated aerodynamically (unless rocket engines are used).

For virtually all heavier-than-air aircraft, a large part is dedicated to fighting the force of gravity (either fixed wings or a rotor). The surfaces used for fighting gravity are thus invariably the surfaces with the highest L/D.

By rolling the aircraft, the lift generated by these surfaces is tilted inwards, and it gains a force component perpendicular to the direction of motion. Rolling thus uses the most efficient means of generating an aerodynamic force - the wings or a rotor - to generate the centripetal force.

It gets better, still. Even if you had a fuselage that somehow had the same L/D in yaw as your fixed wings, a roll is still more efficient. This is because a single tilted force always has a lower magnitude than the sum of the horizontal and vertical components per the triangle inequality.

Use yaw to coordinate your turns, and use roll to do the actual turning. In a coordinated turn, the most efficient speed may be somewhat higher because the balance between induced drag (reduces with higher speed) and parasitic drag (increases with higher speed) is shifted. Compare this with a glider, which has a higher speed for optimal L/D (optimal range) with increased ballast.

Depends on the speed: it costs very little extra energy to yaw a hovering helicopter. 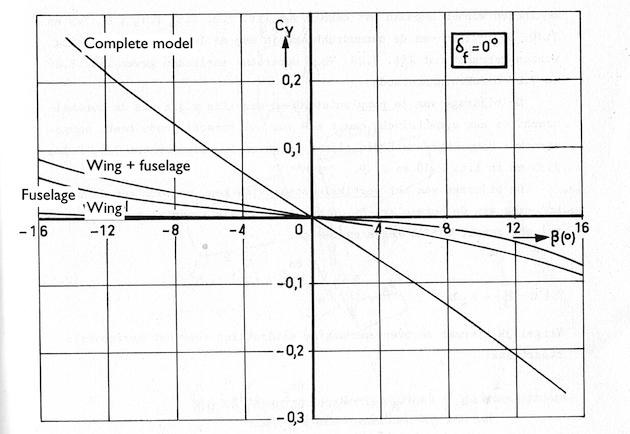 That is about the force vectors, the question is about energy = force * distance or force * velocity * time, and that is where an exact workout becomes laborious. This data is available from simulator aerodynamic packages, but there are limitations on data reproduction.

Qualitatively speaking, the difference between the two is:

Of course, the above does not mention the comfort zone, our brains and bodies are way more comfortable experiencing normal forces than they are experiencing side forces. 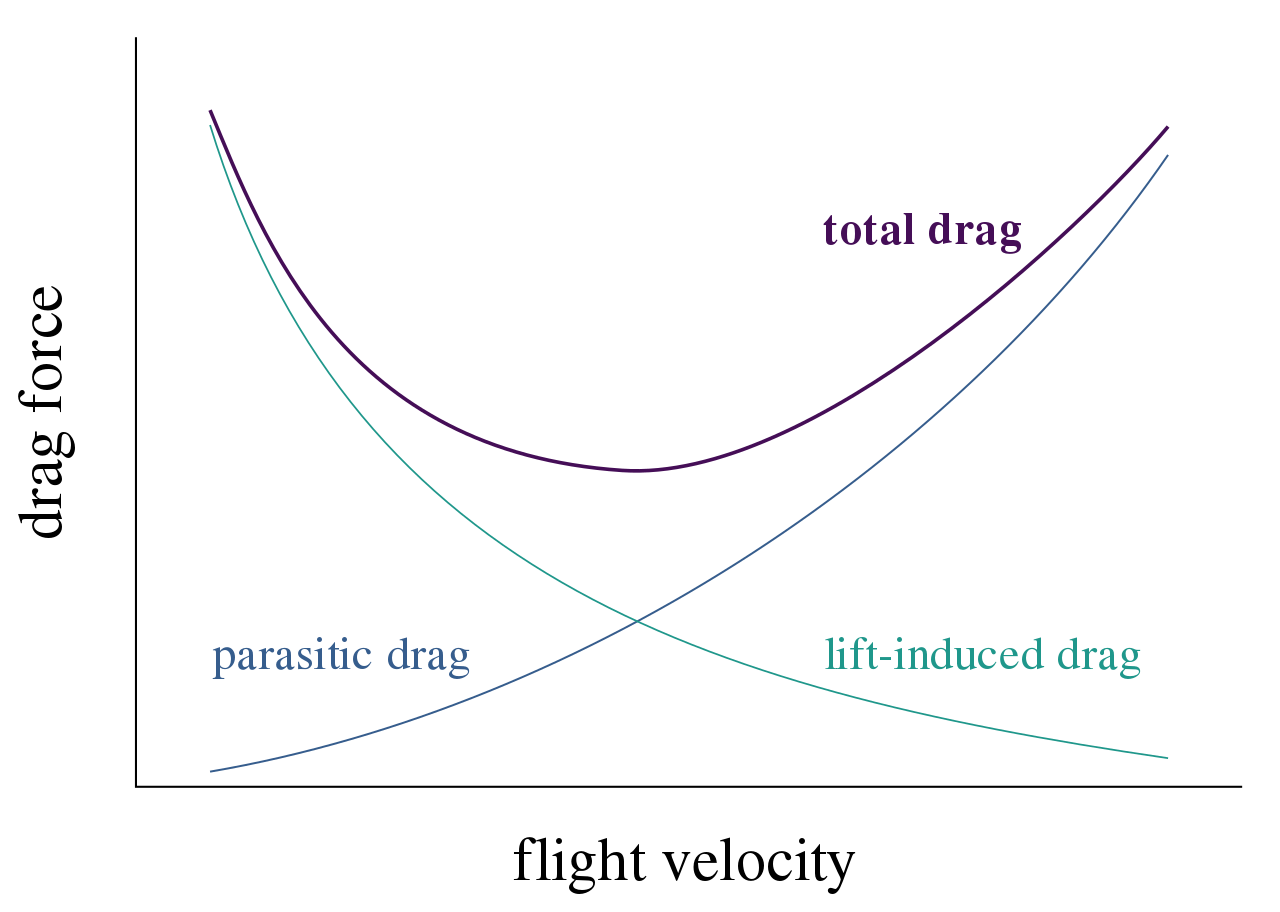 The best way to look at this IS to look at drag, that is what "costs you energy".

We have arms and legs. Why don't we walk around on our arms? It's theoretically possible! I could even write an equation for It! Let's try some common sense first.

Turning requires motion, as does heavier than air flight. There for the hovering case cannot be considered, or any variable airspeed. Let's look at flight at a given airspeed. In ALL cases lowest drag is most desirable.

Assuming no change in altitude or airspeed executing the maneuver, how do we do it with the lowest drag? Certainly not by turning the fuselage sideways into the airstream and using the engine to pull us in a new direction. Banking the aircraft uses the far more efficient horizontal component of the wing lift vector to create side ways motion. This is the "turn".

Coordinating the turn with rudder keeps the thrust vector and empennage "following" the new direction of flight, with the best use of thrust vector, and least amount of drag, as possible.

Breaking the turn down to many instantaneous steps can help clarify the thought. If you are worried about that huge wing creating drag by moving side ways, have a good laugh. At any given instant it is accelerating horizontally from V zero (very little drag) while maintaining the vertical lift component. This is why turning is considered acceleration, even though airspeed is constant.

Comparing the graceful slow wing to a furiously churning prop, few could argue for the latter.

Not the answer you're looking for? Browse other questions tagged aerodynamics roll yaw or ask your own question.

15
What is the optimal bank angle to accomplish a given turn in a glide?
7
What is the name for yaw, pitch and roll together?
4
Why does increasing thrust on one engine make the plane roll and not yaw?
14
Why does a stall decrease lift, rather than increasing it?
9
Why does elevator input move the turn coordinator ball in steep turns?
6
Why is the 737’s aileron/spoiler authority reduced at low flap settings?
14
What are the exact meanings of roll, pitch and yaw?
8
Just how do the underbanking and overbanking tendencies work?
2
How do coefficient of lift/drag variation with speed differs between swept and unswept wings?