Why did the RAAF procure the F/A-18 despite being purpose-built for carriers?

Why did the Royal Australian Air Force (and others) procure the F/A-18 despite being purpose-built for carriers?

The airplane is extremely versatile, while having adequate performance, and is a good choice when a small airforce needs a do-everything airplane to replace multiple types.

Being designed for carriers, it's overbuilt for normal land operations in many key areas, which means a longer airframe structural life in its much easier life landing on runways. For an air force with a limited budget and the need to run the airplane a long time, it's worth giving up some of the speed/payload/range that was sacrificed by the structural needs of carrier ops.

Wanting to replace the Dassault Mirage III, and after considering multiple fighters from multiple nations, it boiled down to the F-16 and F/A-18.

The F-16 had engine issues, inferior radar, no long-range missiles and BVR capability, single engine, and was technologically immature at the time.

Note: There were concerns that the larger more sophisticated F-15 could destabilize the region. The F-16 and F/A-18 by comparison are light fighters.

Selection of the replacement of the Mirage III was of course carefully considered by the RAAF, and the most suitable airframe was considered for the mission and circumstances typical for a vast, distant and sparsely populated continent:

Why a carrier-capable plane over a land-based plane? Australia has a history of operating carrier craft beginning in the 1920s.

At the moment there are two helicopter carriers in the Royal Australian Navy, but no full-deck carriers since the retirement of HMAS Melbourne in 1982.

However, Australia is surrounded by a lot of water, and lacks land borders with any other nation. (map below) It is possible that carriers may return.

The F/A 18 had an estimated service life of 20 to 30 years (depends on the source) based on 100 carrier landings a year Source. So its not unreasonable that a carrier could be ordered and delivered and commissioned while FA-18 were still serviceable.

The FA-18 order was announced on 20 October 1981,source which overlaps the in-service years of the HMAS Melbourne. 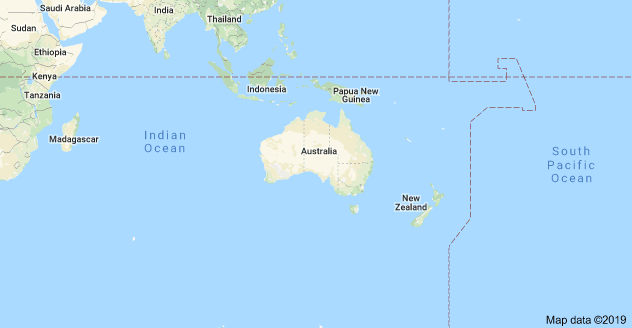 For the "and others", the documents from Finland have become public as the secrecy period of 25 years has recently been passed.

In a major military deal, there are always technological, economical and political aspects.

There were five candidates:

The Finnish Air Force tested all candidates between summer 1991 and winter 1992. The Hornet was considered clearly better than the others. It had the best range, mission time and could carry the biggest missile load. These are important factors for Finland, which is geographically a large country.

Air Force saw Hornet as modern and it had good development potential. Development costs were shared by many nations.

F-16 did not fulfill all the performance requirements from the Air Force. In addition, proposed participation of the Finnish aviation industry was not seen as adequate. At the time of decision, the production line of F-16 was closing.

Gripen and especially many of it's critical components were still in prototype stage. The system was seen as too immature and hence the JAS was rejected as being too risky. Swedes expected that Finland would take part in the development costs, though it was not known how much costs there ultimately would be.

Mirage did fulfill Air Forces requirements and was considered as a really good plane for the pilot. However, the maintenance system was seen as difficult and it was feared that maintenance costs would be high due to low number of users.

MIG-29's electronics and maintenance systems did not fulfill requirements. Lifetime of the plane was half from that of the others. MIG-29 was by far most expensive considering both purchase price and operating costs over 30 year period.

Politically, buying the MIG would have meant co-operation between Finland and Russia, and this type of co-operation was seen as undesirable by the government. Selecting the F-18 was a decision and signal towards co-operation with the west. During the cold war Finland was not part of the eastern block, but being a neighboring country of Soviet Union, did experience quite a bit pressure from the east.

The Russian economic crash following the collapse of Soviet Union was a major issue, too. There was no guarantee that the country would be able to deliver the planes.

There is a very limited selection of affordable 2-engined fighter aircraft (and the selection was even more limited in the time frame of these acquisitions). Some countries (Canada, Australia) have large uninhabited areas and their air forces prefer the added safety of a second engine. This limited Australia's choices to F-15 or F-18.

Not the answer you're looking for? Browse other questions tagged military australia aircraft-purchase f-18 or ask your own question.

10
Russian-built and NATO (USN, European) probe-and-drogue -- are they interoperable?
5
What are the requirements for foreigners to join the RAAF as a fighter pilot?
8
Is this BA15X flight a logistic flight for British Airways?
29
Why don't Russian aircraft sell as much as their European/American counterparts?
16
Why did the Avro Vulcan use a delta wing?
5
Why are the largest civilian aircraft not adapted for military use?
1
AWACS - what do these antennas do?
22
Why are special aircraft used for the carriers in the United States Navy?
16
Why was the DC-9-80/MD-80 so successful despite being obsolete almost from birth?