Why are the B-47’s inboard and outboard engines mounted so differently?

The B-47 has six underwing GE TG-190 engines, two on each inboard pylon and one on each outboard pylon.

The inboard engines are mounted on a long pylon that extends well below and forward of the wing, such that the inboard-engine tailpipes are (longitudinally) just about even with the wing’s leading edge.

The outboard engines, in contrast, are mounted on much shorter pylons and fit snugly against the underside of the wing, with their tailpipes extending aft of the wing’s trailing edge; they’re placed so far back that their pylons even protrude beyond the trailing edge.

(Image originally by the United States Department of Defense, via Balcer at Wikimedia Commons; modified by me.)

The forward pylon mounting of most jets with wing mounted engines is to use the engines' mass to move the overall center of mass of the wing forward, closer to or ahead of the torsional axis of the wing box. Boeing discovered this helps with aerolasticity related issues with long, flexible, swept wings. A bit like mass balancing a control surface, but on the root structure.

The outermost engines, being so close to the tip where the chord is short, have to be farther aft or they would move the wing's center of mass too far forward in that area. 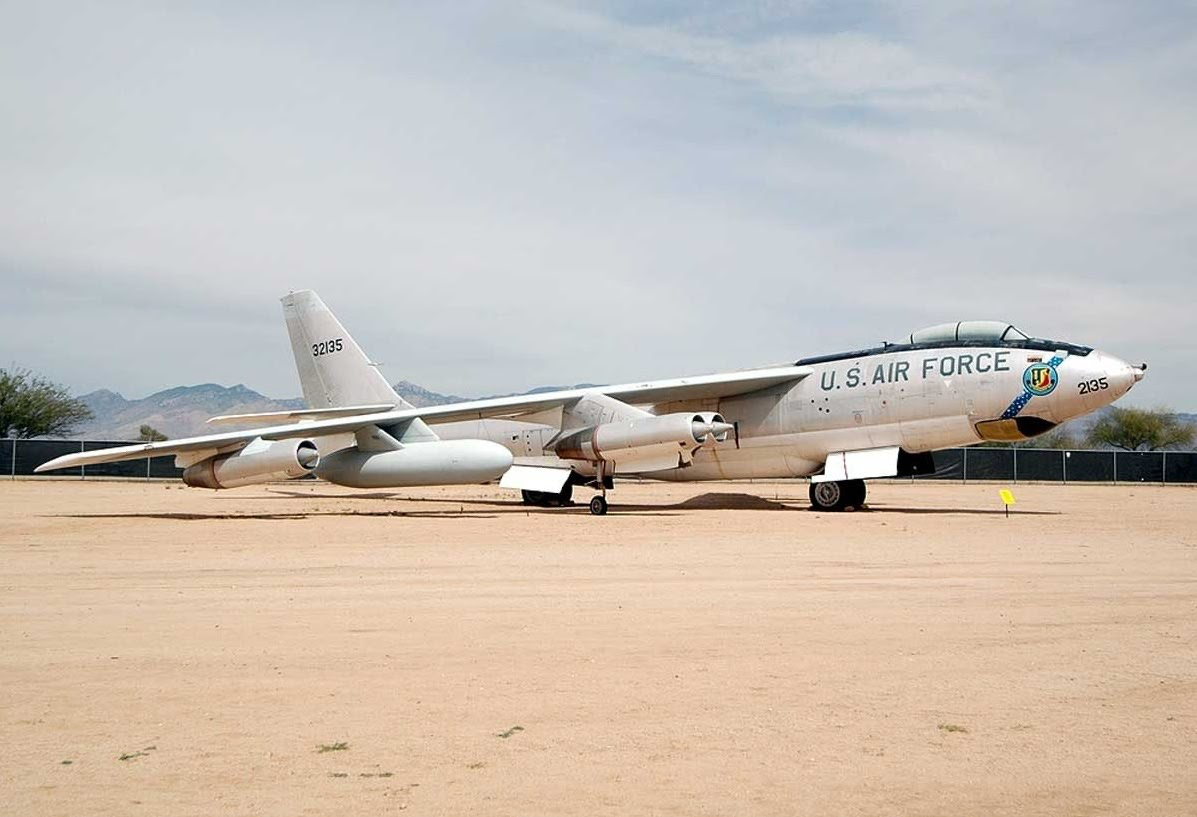 The wing's flexibility was a concern, as it could flex as much as 17.5 ft (5.3 m) at the tip, and major effort was expended to ensure that flight control could be maintained as the wing moved up and down.

...with the twin inboard turbojet engines mounted in neat pods, and the outboard engines tacked under the wings short of the wingtips.... This arrangement reduces the bending moment at the wing roots, saving structural weight. The mass of the engines also acts as counter-flutter weights.

The B-47 required six engines of the type with maximum thrust that was available at the time. Four were mounted in twin pods, at about 1/3 span in order to provide decent bending and flutter relief to the thin wing. The remaining one was mounted past the fowler flaps almost at the tip - a cluster of three engines may provide cooling issues for the middle one.

In the photo it can be seen that the thin wing bends down considerably when on ground, and that there is no room for a forward extended pod at this place.

Not the answer you're looking for? Browse other questions tagged aircraft-design engine-placement b-47 or ask your own question.

15
Why are the 747-8 engines placed differently than on the older versions?
4
What is the difference between inboard and outboard engines on a Russian IL-18 turboprop?
17
Why are there different number of propeller blades on the inboard and outboard engines?
6
What are the issues involved in converting a quadjet into a twinjet?
6
What are the advantages/disadvantages of in-fuselage engines (eg most fighter jets) vs wing/fuselage mounted engines?
29
Why do most airliners have underwing engines, while business jets have rear-mounted engines?
4
Why are overwing engines so rare?
12
Why wasn't the 737 MAX's landing gear lengthened enough to mount the engines under the wings, rather than in front of them?