What and where are "flotation seat cushions"?

Inspired by the question Why did the US Airways Flight 1549 passengers stay on the wings? I read parts of the respective accident report[PDF]. They mention the flight was a non-EOW (extended overwater) flight but was luckily equipped as such anyways and thus had life vests and "flotation seat cushions".

Because the accident airplane was equipped for EOW operations, it carried life vests for both passengers and crewmembers. However, given that the accident flight route was not an EOW operation, the airplane could very well have been equipped with only slides and flotation seat cushions as the primary means for passenger flotation.

I've never heard of such a device, I only know the life vests below a passenger's seat. Can the seat cushion (the part where you sit on, I assume) be detached from the seat to serve as a "swimming aid"?

Maybe it's different in the US and Europe. I sometimes fly from Germany to the UK and the FAs never mentioned any cushions. How comes?

It became something of a meme:

In the unlikely event of a water landing, your seat cushion can be used as a flotation device.

You remove your seat cushion and hold the straps on the back as a flotation device. It's probably more of an aircraft/airline thing than by country. It seems that the industry is favoring life vests more, as they are designed to keep a person afloat and face up even if unconscious and not adding the requirements to the cushion allows the seat to be smaller and lighter. 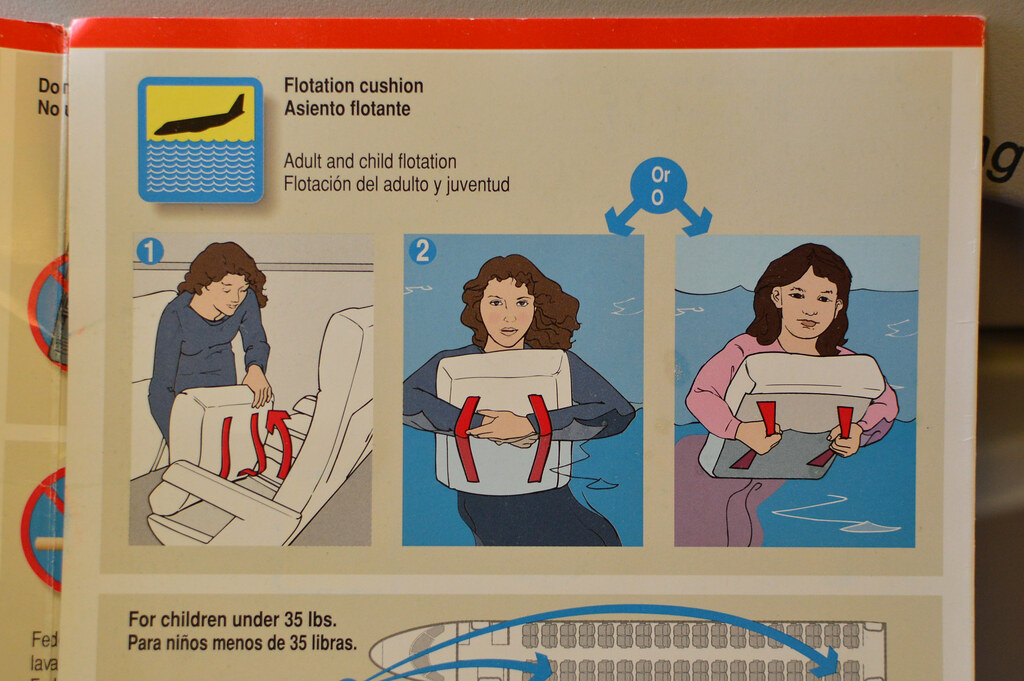 To add to fooot's answer, emergency equipment required on aircraft varies based on the routes the aircraft will take.

In the most extreme case, if the aircraft will be performing Extended Over-water Operations (EOW), then it requires rafts, life vests, and more:

a. Except [... ] no person may operate an airplane in extended overwater operations without having on the airplane the following equipment:

c. A survival kit, appropriately equipped for the route to be flown, must be attached to each required life raft.

If the aircraft will go over water, but to for "extended over-water operations", then the requirements are lighter:

(a) Except as provided in paragraph (b) of this section, no person may operate an airplane in any overwater operation unless it is equipped with life preservers in accordance with § 121.339(a)(1) or with an approved flotation means for each occupant. This means must be within easy reach of each seated occupant and must be readily removable from the airplane.

And if it does not go over water at all, or very very shallow water only:

(b) Upon application by the air carrier or commercial operator, the Administrator may approve the operation of an airplane over water without the life preservers or flotation means required by paragraph (a) of this section, if the air carrier or commercial operator shows that the water over which the airplane is to be operated is not of such size and depth that life preservers or flotation means would be required for the survival of its occupants in the event the flight terminates in that water.

Depending on the airline and its routes, they may have all their aircraft equipped for EOW anyway (added cost but more flexibility), or only part of them for EOW and the rest for other overwater operations, or only the latter.

Extended overwater operations are defined as:

with respect to aircraft other than helicopters, an operation over water at a horizontal distance of more than 50 NM from the nearest shoreline.

Not the answer you're looking for? Browse other questions tagged evacuation ditching or ask your own question.

50
Why do airliners hug the coast on flights?
20
Why did the US Airways Flight 1549 passengers stay on the wings?

21
What are the risks in landing on a beach vs. shallow waters?
23
Where is the safest seat in the plane?
11
What are these little things on the evacuation slide?
11
How is the emergency exit row handled when there are no passengers aboard eligible to sit in an exit row seat?