Why did the US Airways Flight 1549 passengers stay on the wings?

Couldn't they use the overwing slides as flotation devices and stay on those instead?

Because they were told to evacuate there, if you take a look at the official audio transcript from the accident:

The rear exits were largely blocked by water making the forward exits the only ones with slides, those slides were utilized as evidenced by photos included in the report: 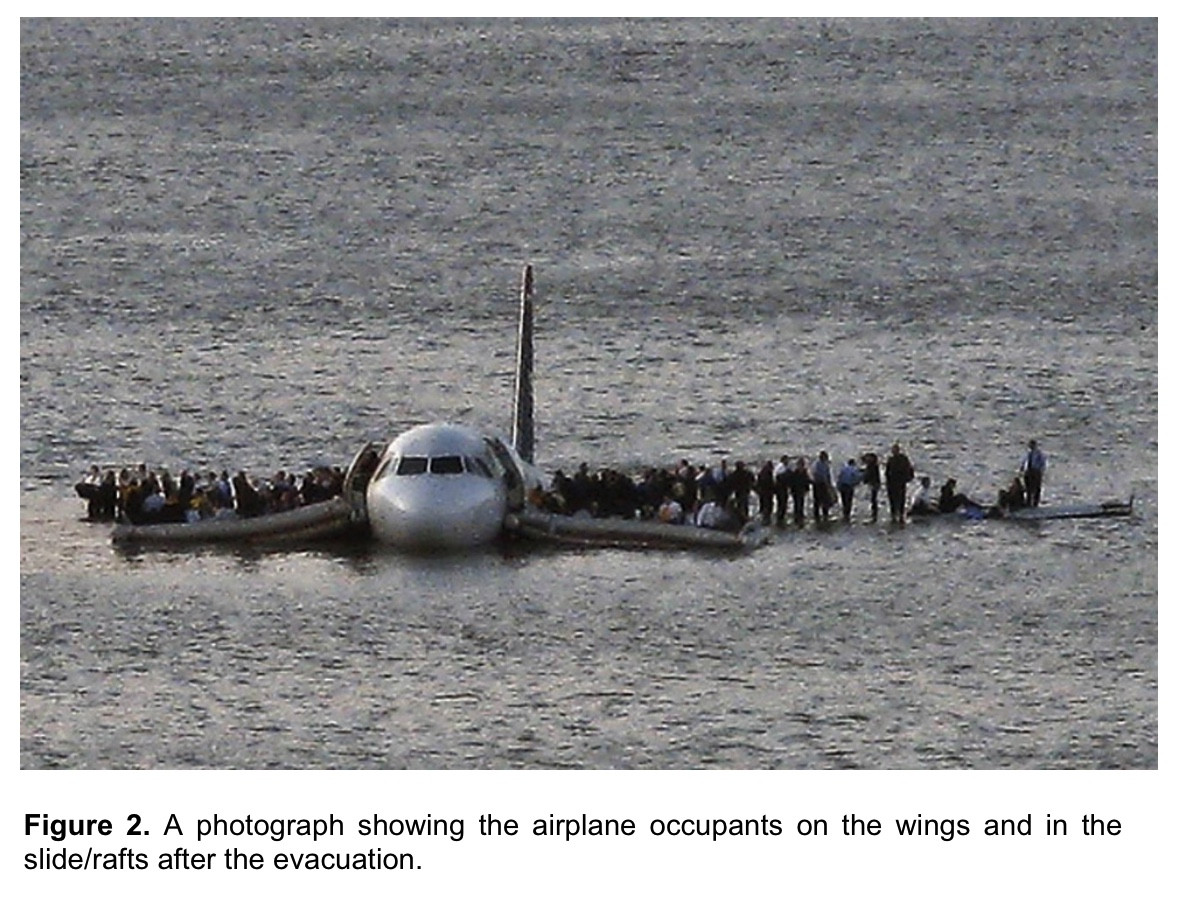 With only half of the slides available the wings also had to be used. The wing slides are intended only for ground landings and do not double as rafts, as per the accident report

According to TSO C-69c, Type IV is a combination inflatable exit ramp and wing-to-ground slide. The off-wing ramp/slides were intended to be used in the event of a ground, not a water, evacuation.

As such the over wing slides could not be used in this case.

Per the accident report from the NTSB, only the four exit slides (two at the forward doors and two at the aft doors) could be used as rafts, as the aircraft was configured for extended overwater operations (EOW). Regulations required there to be enough capacity for all passengers if the largest raft was not usable. Each slide/raft was rated for 44 passengers, or an overload of 55 passengers.

During the ditching, the aft part of the cabin rapidly filled with water, preventing the use of the aft two exits and their slides. This meant that the remaining rafts could hold a maximum of 110 people if overloaded out of the 155 people on board the flight. That would leave at least 45 people on the wings.

The report states that about 87 people were rescued outside the two rafts. Many passengers rushed to the overwing exits, creating a backup, and flight attendants had to ask passengers to come forward to the rafts. The overwing exits are not supposed to be used unless other exits aren't available. There are also life lines to help passengers when out on the wings, but these were not used. Since the flight attendants are located on either end of the plane they were too far away to advise the passengers about this.

The report further discusses that even the two usable rafts were not technically required (the flight was not an EOW route), and the remaining passengers would have been in danger of not surviving the cold water if they had not been rescued so quickly.

Not the answer you're looking for? Browse other questions tagged evacuation ditching us1549-accident or ask your own question.

38
What are these hooks on the A320's wing used for?
5
What and where are "flotation seat cushions"?

11
Which gas is used to fill the evacuation slides of modern aircraft?
11
How is the emergency exit row handled when there are no passengers aboard eligible to sit in an exit row seat?
37
Why evacuate wing at the front side after water landing?
8
For routes over oceans, are slide rafts fitted with first-aid items, food, water, radio, etc?
15
Is it a standard procedure to use emergency slides without imminent danger?
5
What and where are "flotation seat cushions"?
4
Why do almost all overwing exit slides open over the trailing edge of the wings, and almost none over the leading edge?
3
Are overwing exits still useable if the flaps can’t be lowered?
2
What is the maximum range over open water with twin-engine to require dinghy in EASA?