Why do some helicopters have such complicated flight control mixers? 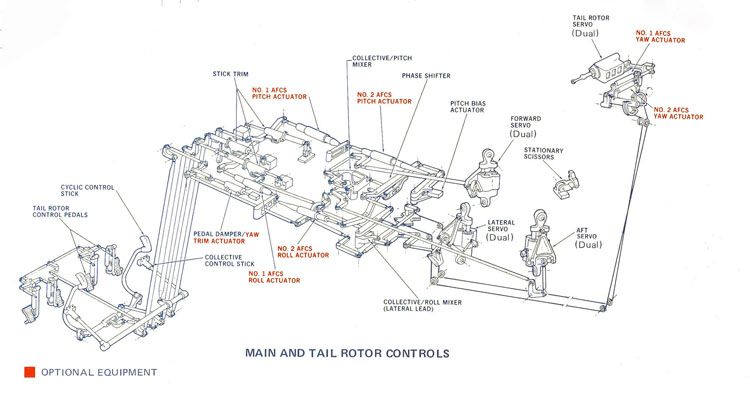 Some helicopters have a very complicated set-up that mixes flight control inputs to many or all of the swashplate actuators, like in the picture above for the S-76.

Why are all the cross-couplings required, would the helicopter not be controllable without the flight control mixing action? We only need to cant the swashplate for cyclic control, lift it for collective, and connect the pedals to the tail rotor, right?

Flight dynamics of a helicopter are complicated indeed. Just to illustrate, consider a helicopter in a stable hover, with the pilot holding the collective, cyclic and pedals in the position that maintains attitude, altitude and heading.

They now want to gain altitude only, in a climbing hover. The sequence of events: 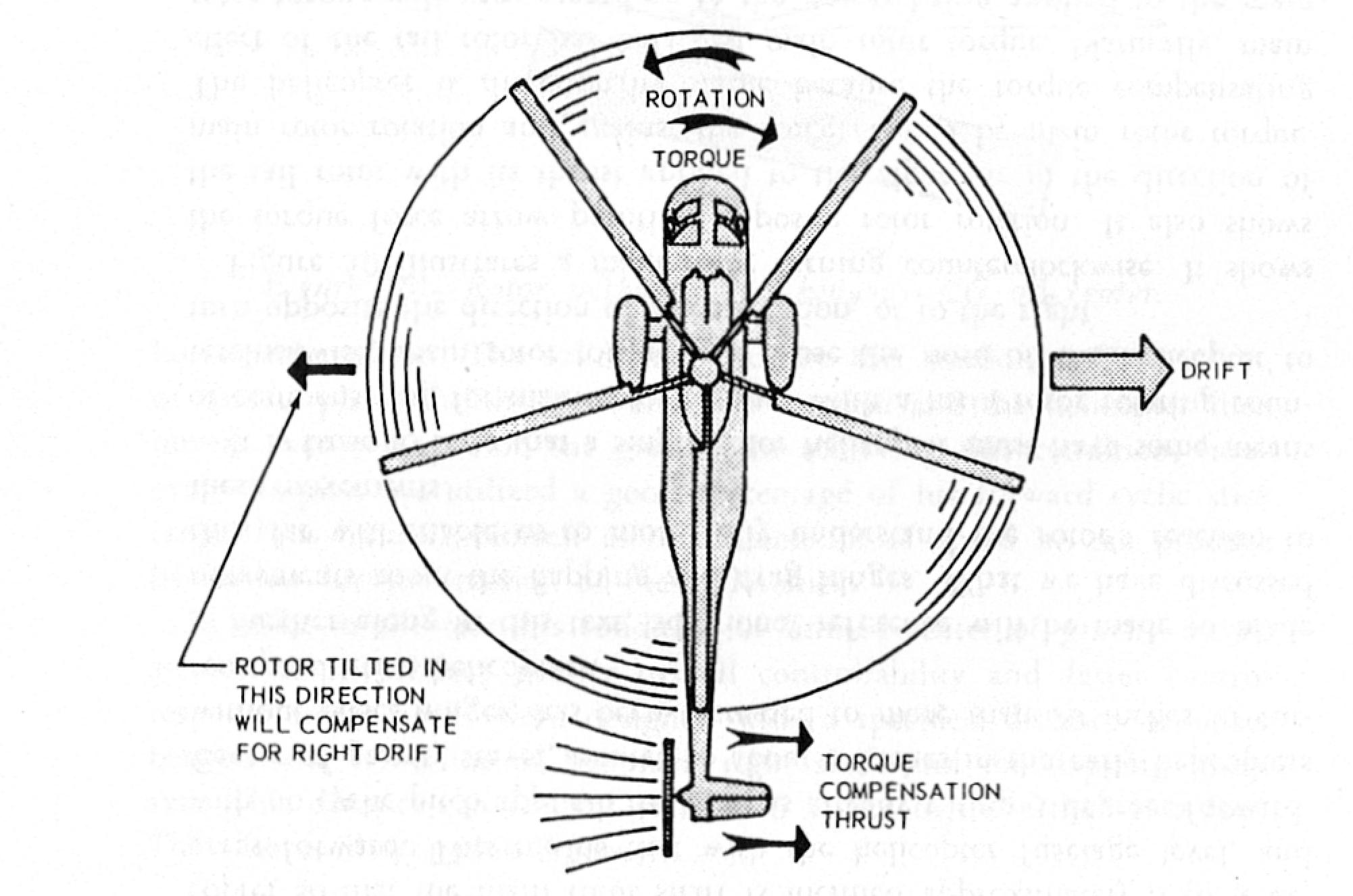 For small, simple and low cost helicopters, this is indeed the way they are flown. But for larger helicopters with a mission, some of the cross couplings are taken care of by the mechanical mixer: when increasing collective, a mechanical link automatically increases the inputs for the cross couplings. It does so in series with the flight controls, which do not move and retain their former selected position. 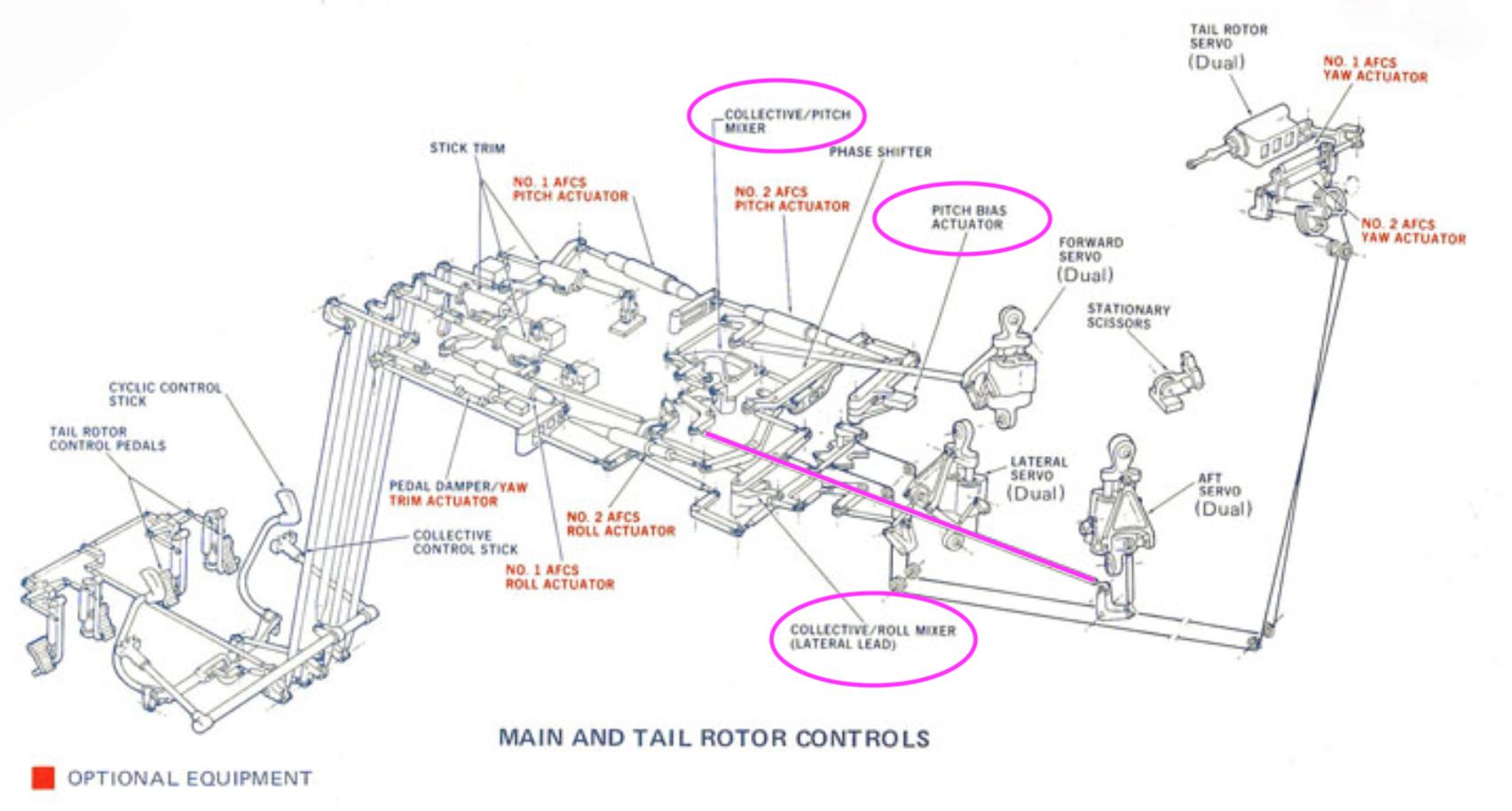 The drawing in the OP is of at the S-76, a medium sized helicopter, and we can find the following:

Also in the OP drawing: optional AFCS servos, which reduce control forces and provide the static stability that helicopter aerodynamics do not provide. Plus trim actuators, which change the neutral position of the feel springs or completely eliminates feel forces. And a yaw damper.

Not sure if this should be an answer or comment. Not addressing "Mixing" but control system complexity. Many larger turbine helicopters have a system called Force Trim which is used to recenter the cyclic at different speeds. Without Force Trim the pilot would be holding extreme forward cyclic at high speed and extreme aft cyclic at low speeds. Also many models of helicopter have various linkages to minimize feedback from the rotor and control system to the cyclic. The pesky problem of "Stick-shake" can be largely mitigated by some form of irreversible linkage. Both of these systems add to control system complexity.

It's necessary to allow control by the relatively crude "pilot's brain" of an autopilot system, basically to help it out with all the cross-couple responses that are normally taken care of by a human with lots and lots of practice.

You can see that there are autopilot servos in the system, as required for IFR single pilot certification.

Not the answer you're looking for? Browse other questions tagged aircraft-design helicopter flight-controls or ask your own question.

26
Are helicopters easier to fly nowadays due to computers?
3
How do a helicopter's cyclic and collective transfer commands to the swash plate?
4
How does a helicopter phasing unit work?
4
Adverse pitch on unstable aircraft's roll

3
Is multi/quadcopter flight control similar to helicopters?
49
Why do helicopters have such limited range?
18
In helicopters, why not have electric motors controlling blade pitch?
3
Why is this type of rotor hub so rare...?
19
How does this RC helicopter keep itself upright?
8
Why is the empennage design of this Lockheed 1049E so complicated?
3
How do a helicopter's cyclic and collective transfer commands to the swash plate?
3
How are pitching and rolling moments transferred from rotor to the body?
1
Can a helicopter be stable without moving the control inputs?
9
How does the Sikorsky X2 technology rotor control blade pitch?