On an ADS-B In display, do the pilots see the squawk code or call sign for other aircraft?

If I understand correctly, with a ADS-B In equipment or TCAS equipment on board, the pilots could see the surrounding traffic with its assigned squawk code like "4653", is that right? But could the pilots know the aircraft identification like "UA858"?

ADS-B is part of a system that compromises a number of different things. ADS-B (In) means that your aircraft is capable of receiving the ADS-B data, FIS-B and TIS-B as well. FIS-B broadcasts information such as weather. TIS-B is a traffic broadcast system.

ADS-B includes a number of messages (about 27 different messages), including:

Now, to a pilot, here is basically what you would see: 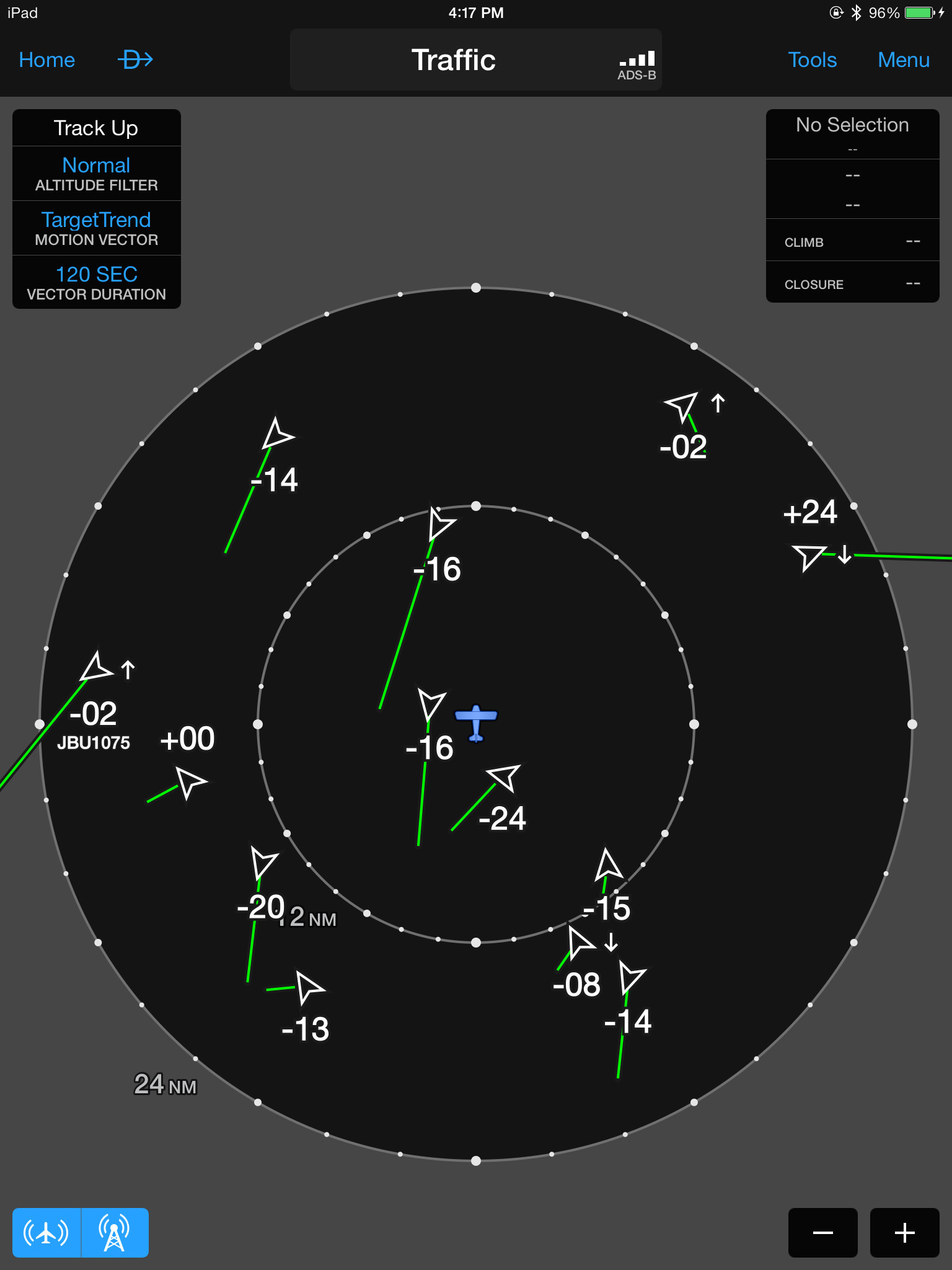 You can see that some targets include the flight number (JBU1075) and clicking on a target (this is in Garmin Pilot) will give a little more information on the target:

What the pilots don't see is the squawk code, this information is not useful to pilots because they don't really care about that for other aircraft. The only real use of ADS-B target information is to understand where other aircraft are. If a pilot needed to call up another pilot, they would do so by tail number or flight number. ATC Controllers and other pilots will never call a pilot by squawk code.

Why? Because the squawk code changes potentially many times during a flight. Let's take for example a simple flight from KGRB to KMNM (a flight I'm familiar with):

The one thing that remains constant there is my tail number. I know to listen for (and have mentally trained a "listen up" trigger when I hear) "1205-charlie" or "05-charlie" on the radio. ATC has been talking to specific aircraft using the tail number/flight number since the ATC system was born. Squawk codes match aircraft with targets on the radar (because before ADS-B all that was transmitted was the squawk code). This information is only useful to ATC and not other pilots.

Now if I'm cruising around and I see a target on my ADS-B that is headed in the same general direction I am, and I'm not talking to ATC, I can try calling that target using the tail number/flight number directly (this is done on the air-to-air band or a local frequency, don't broadcast on 121.5 or you'll hear "guaaaaarrrrrrd" from some obnoxious pilot).

The display depends on the equipment used. For example, the Avidyne 540 Pilot Guide says this:

Normally I see a solid white diamond with a dotted line leading away to indicate direction, + or - how many hundreds of feet above or below me that traffic is, and an arrow if the traffic is climbing or descending. That would be plain ADS-B Out from other small planes like mine.

The diamond may also be hollow, blue, a yellow circle, a white arrow, a yellow arrow, all meaning different things. I'm not going to copy all descriptions from the Avidyne manual. One can read more here https://www.avidyne.com/support/doctype.asp?doctype=pilot%27s+guides&list=doc Scroll down to IFD-xxx, download it, and then page 3-39 for Traffic Display in the April 2019 release.

If the traffic is close enough, I'll also get a "traffic, 1000 high, 2 miles" kind of aural message over the intercom. Typically when other traffic are nearby in the pattern, or perhaps when crossing paths at intersecting angles (like me at VFR and IFR traffic going by 500 feet above or below).

Not the answer you're looking for? Browse other questions tagged ads-b tcas or ask your own question.

3
Is the TIS-B traffic filter on board or on the ground?
7
Which FAA regulations require compliance with TCAS II Resolution Advisories?
3
Why do I missing 1090 Rebroadcast Traffic (ADS-R) Targets from Ground Station as part of 978 Uplink?
2
Why are both ATC and TCAS tasked to prevent collisions although TCAS takes precedence anyway?
6
When will the Canadian ADS-B satellite system be implemented?
3
When is squawk 1000 assigned in USA?
3
How could I match the surrounding traffics displayed with their radio communication
1
What is the difference between SSR and ADS-B?