Why don't short runways use (downhill) ramps for takeoff?

This is a followup on question: Why don't short runways use ramps for takeoff?

There are multiple answers to that question that answer why an uphill ramp at the end of the runway does not make sense. But what about going the other way? 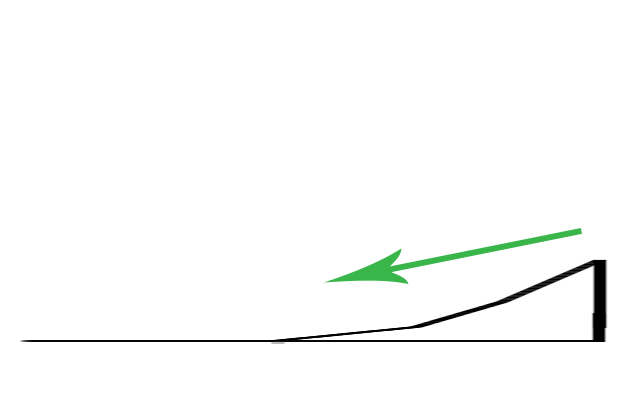 I would imagine a downhill ramp at the beginning of the takeoff roll could give the aircraft more energy on takeoff (converting potential energy to speed), and that could indeed improve takeoff performance. This would be useful at places where extending the runway is not possible.

How the aircraft would get up there is another question, but worst case scenario it could always back-taxi on the runway before turning around and taking off.

Is this practice ever used? If not, what are the reasons?

it could always back-taxi on the runway before turning around and taking off.

So ... that would limit the steepness of the slope significantly, and thus the potential benefit.

Most other aspects are already covered by Bjelleklang's answer: Landing aircraft would either have to clear the obstacle before being able to touch down, or they'd fall over the edge if they don't brake in time (rather than, as these days, get stuck in the grass behind the runway end)

Many of the arguments against using a ramp from the other question is valid for this as well. Any ramp means a height difference between the ramp itself and the runway, for it to actually make a big difference I suspect a fairly long slope from the ramp to the runway is needed, and this will obstruct the runway for landing aircraft. If the ramp is above ground, aircraft taxiing for take-off would also have to overcome the upward slope, meaning that more fuel is needed for taxi.

You'd also need a ramp at the opposite end; the runway would basically look like a stretched out 'U'. A possibly unintended consequence of this is that the aircraft would at some point reach the point where the runway begins to slope upwards again, resulting in the aircraft either having to abort or use additional power to get airborne.

To avoid such a case you would have to stretch out the runway so this isn't an issue, and if the goal is to reduce the runway length the current design is more efficient. Alternatively you could create a separate runway for each direction, but then you'd be faced with potential crashes whenever a pilot tries to land in the wrong direction. This would also result in difficulties for airports located in built-up areas where there simply isn't available room for additional airport infrastructure.

If you keep the ramps on ground level and the runway center below you'd also need working drainage pumps whenever it rains or snows. If not, the runway would quickly be reduced to a pond with very wide roads leading into it. Depending on where in the world you are, water might seep in from the surrounding terrain as well, making reliable drainage even more important. This is generally avoided by building runways with a slightly raised centerline so that water runs out to the sides so that you can use "passive" drainage systems such as pipes, ditches, pools etc where no machinery is required.

There are some airports such as Lukla where one end of the runway is substantially higher than the other, but due to surrounding terrain it is only possible to land and take-off from opposite directions. Landing aircraft can use the upward slope for an additional braking effect, while aircraft taking off will get a speed boost from the downward slope.

Here's an example of a sloped up runway, midway down looking southwest. The end is definitely sloped up. We're typically off the ground well before that tho, the runway is 3110 feet long.

Taking off from that end towards the northeast, going downhill to start will help with the takeoff acceleration.

A "relaxed definition" of this concept is in use today on aircraft carriers.

Notice the ramp in question is essentially a mechanical device to increase the total thrust force on the aircraft, which increases acceleration. This is also exactly the same as pitching an airborne aircraft down, or launching a model aircraft by throwing it. RATO can help too.

The result is higher air speed for a given distance as compared with no "ramp".

The practicality of building such a device would be questioned. Generally, it's landing distance that is limiting.

But many soaring birds take it one step further, they simply jump off a cliff (disclaimer: attempting without certified wings may be hazardous to your health).

Not the answer you're looking for? Browse other questions tagged takeoff airport-design or ask your own question.

0
Gain Extra force from Weight in Slopped Runway
39
Why don't short runways use ramps for takeoff?

10
Is it possible to takeoff without flaps extended?
9
Why would an airport use crossing runways for takeoff and landings?
11
What is the optimal sequence of departures and arrivals on a single runway?
6
Under which conditions is full rated power instead of METO power required for takeoff (DC-3/C-47 with Pratt&Whitney 1830 twin wasp engines)?
6
How should you coordinate with traffic at non-towered airports?
3
Has this "straight through" airport design ever been contemplated?
8
What are the pros and cons of practising figure-eight landings on perpendicular runways?
39
Why don't short runways use ramps for takeoff?