I understand wing twist is used to:

So if the top wing on a biplane is canted upward, in a mild stall, it will stall first, with the bottom wing still flying, creating a partial stall.

If the bottom is at a lower AOA, it's like having wing twist on 50% of the plane. Wouldn't this act like wing twist on a monoplane and reduce the total moment, therefore needing less of a horizontal tail, like the self balancing wings on modern gliders. Is this correct, at least conceptually?

Wing twist is not required for any wing, although it is often used (as you said) to make sure that not the entire wing stalls at the same time, but also to tune the spanwise lift distribution.

Both of these are much lesser issues for biplanes:

Stall on a biplane

Any wing (when creating lift) creates a flow field around it, where the flow below it is slowed down and the flow above sped up, the flow in front is pulled up, and behind it pushed down. In a biplane, the upper wing is usually a little ahead of the lower one. This means that the upper wing sits in the sped-up region from the lower wing, and gets a higher angle of incidence -- that makes it quicker to stall once angle of attack increases too much. The lower wing is the opposite, though. It gets a lower velocity flow, and the lower side of the upper wing is helping to turn the flow, so it doesn't separate from the lower wing as easily. This means that biplanes have a naturally very gradual stall behaviour, which makes them much easier to control in near-stall conditions than most monoplanes. Triplanes are even more stable.

The reason modern passenger aircraft use wing twist to control lift distribution is that it's easier than using wing planform. In the 1930s and 1940s, elliptic planar wings were all the rage because they're the aerodynamic optimum for planar wings, but they are not the overall optimum (structural weight, manufacturing costs...), and that's why modern passenger aircraft have wing planforms with straight edges, and lift distributions half-way between an ellipse and a triangle (the higher inboard lift can be borne easier because the inboard wing can be made thicker, and it causes less bending moment at the wing root). For bi-planes, they usually have struts between the two wings, so they're incredibly stiff and can bear much higher loads with equal structural weight and despite using quite thin profiles -- This, the small moment of inertia for rolling and the benevolent stall behaviour is why biplanes are still a thing in aerobatics. That's also why tailoring wing twist isn't as critical for biplanes as it is for e.g. large passenger aircraft: There's not as much to gain from it.

This would probably be different if somebody wanted to build a large long-range highly efficient biplane. In that case, there would probably be some gains to be made from introducing wing twist. However, unless that plane had extremely highly stretched wings, it would likely still have worse efficiency than a conventional one because the struts between the wings cause quite a bit of drag, and you'd still have to make relatively thick wing profiles to fit the fuel in, negating the other advantage of biplanes. And that's why such biplanes don't exist. 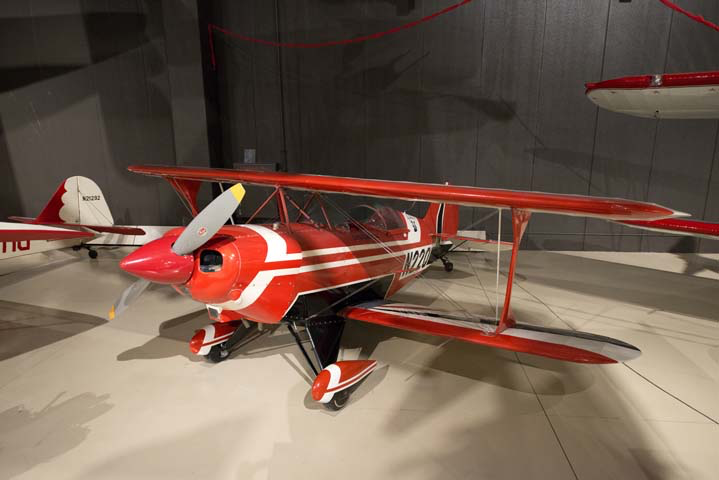 Evidently, they don't. The picture shows a fully aerobatic Pitts Special from 1966 with no visible wing twist.

Go back to the early 1900s and have a look at the "tailless" Dunne biplane. This designer very ingeniously realized wing twist (washout) is possible, making stalling characteristics much more benign, and, taking advantage of wing sweep to use lower AOA aft wing tips to pitch the nose down. This is the fore-runner of todays slats, which can be retracted in cruising flight to save drag.

Other early biplane designs did put the upper, forward wing at a higher AOA, as a stall safety measure, but now with two equally sized wings, one cannot be set to its most efficient AOA.

So, especially if you strive towards a higher aspect, more efficient wing, where do you put your pitch control? Traditionally, aft, taking advantage of the longer torque arm of the fuselage.

Birds deal with this issue by fanning their tails open at high AOA for pitch control, then folding them at cruise to save drag.

But where else could it go? Yes, forward! Leave the empennage on and put another control surface forward. Instead of having a bi-plane, a much smaller forward wing would serve for stall warning, passively dropping the nose (it would stall first).

So if you want tailless, you need something else to control pitch. Lower aspect, washout, placing trims and control surfaces closer to CG come at a price of lower stability and/or more drag.

Computers, which can trim several times a second, have made the reduction in size of passive pitch control "fins" possible, but their function remains critical for safety. Washout and/or slats do add drag, but make the aircraft much safer in low speed/high AOA flight.

So, how about bigger, retractable slats (for swept wing aircraft), or a "safety canard" for all.

13
Why does an aircraft pitch up when the speed increases?
8
Is the low air pressure on top of the wing the major contributor to lift?
5
What is the need for twist along a wing?
7
How would a low-airspeed fixed-wing drone be designed to reduce effects from gusts and wind shear?
0
Which moments are acting on a flying airplane?
8
Have bi-wings been used without creating more drag?
10
Why do the C-141 and C-5 have T-tails?
4
Wouldn't a triplane be much more efficient than a monoplane of same wing area and span?
1
Do biplanes need bigger tail volume coefficients than monoplanes?
2
Wing dihedral in a biplane