Why did this aircraft do a ‘spiral’ before landing?

There was this WizzAir flight two days ago, from BUD to PMI, and right before landing it did a ‘spiral’ like maneuver. I’ve attached a screenshot.

Why did it do that? It looks strange. 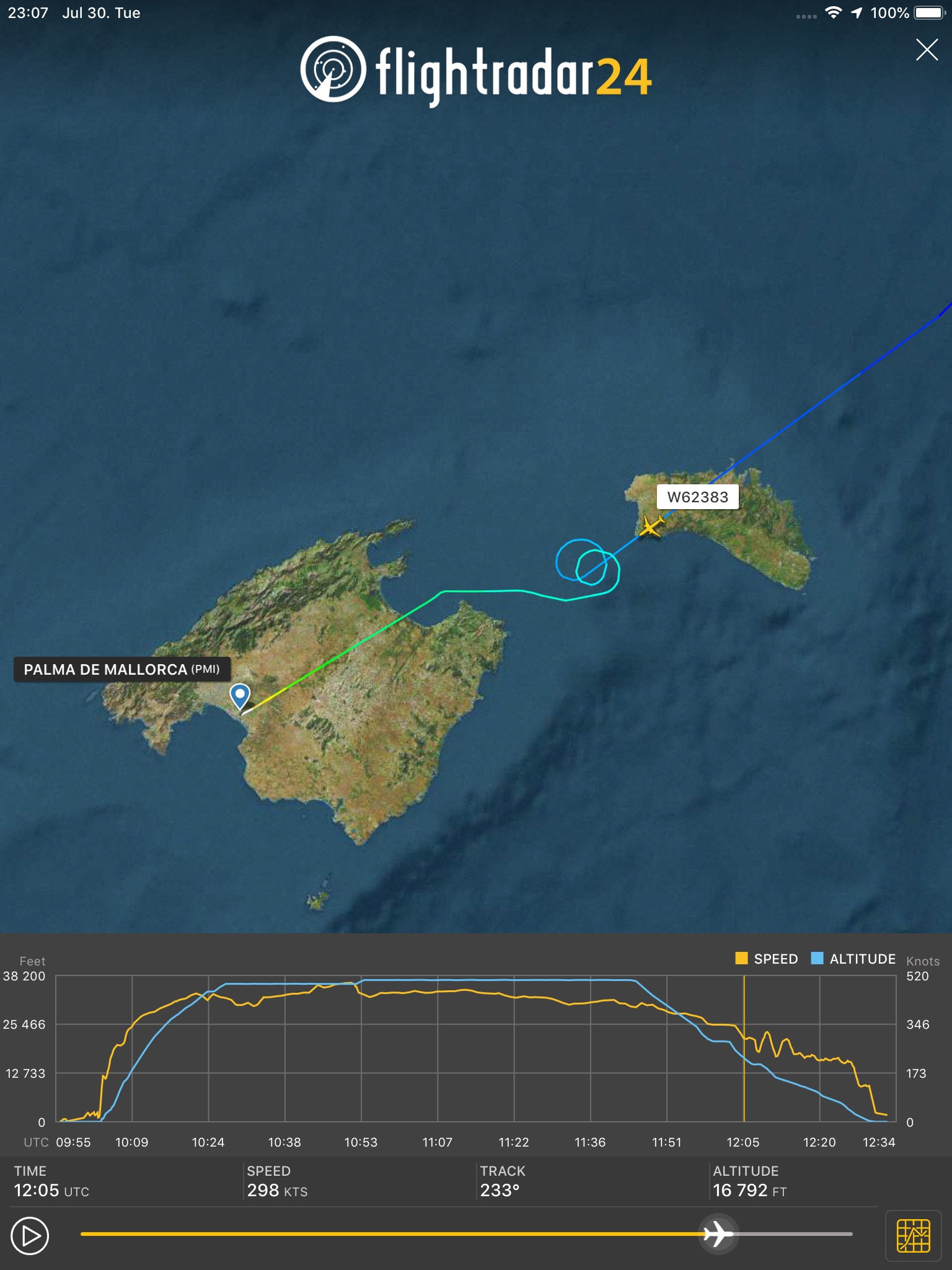 The flight was on the 28th, and before orbiting it was around 12:00 UTC. By using the playback function of FR24, this is the view:

The flight in question was 2383 with call-sign WZZ1161 (FlightAware permalink).

The boxes with numbers and arrows indicate the flight level and either climbing or descending. As you can see, two busy streams were approaching the airport from the north. This orbiting as opposed to a holding track (race track shaped) is common and its phraseology can be:

And a Ryanair flight did the same before continuing the approach. It was just heavy traffic and it's quite common over Heathrow (live as of writing this): 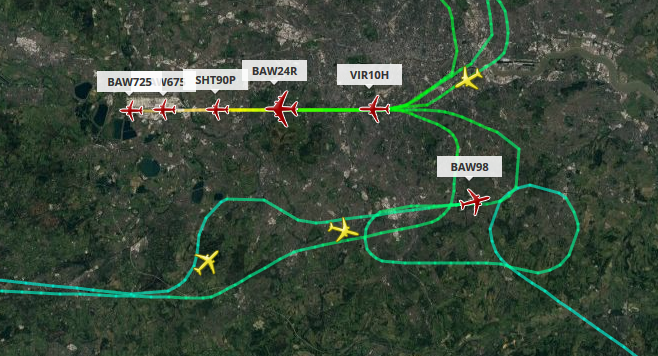 At the time WZZ1161 / W62383 arrived at Palma de Mallorca (PMI), it was rush hour. To sequence the aircraft for final approach, Air Traffic Control usually give aircraft vectors (headings) to increase their path lenght so that they line up with the runway at the right time, with the appropriate amount of spacing from the preceding aircaft.

In case of peak traffic a lot of time may need to be absorbed before the final approach can start. Since vectoring causes high workload for the air traffic controller (multiple instructions, aircraft moving all over the area) ATC resorts to putting aircraft in holding patterns or instruct simple 360 degree orbits.

In the screenshot below you can see 6 aircraft on approach to PMI at the time that WZZ1161 was arriving. All had complex vectors and/or 360 degree orbits as part of their approach. There were just too many aircraft arriving for the airport to handle it efficiently.

The only published Standard Terminal Arrival Routes (STARs) over Menorca are coming from the RIXOT and MORSS waypoints as shown in the following Jeppesen chart: 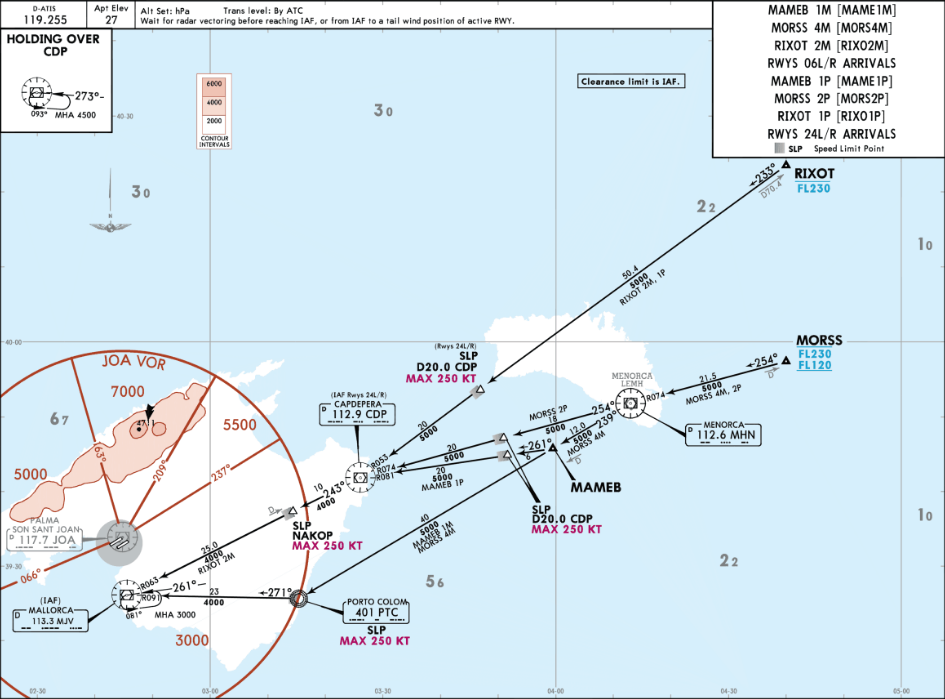 It looks like your plane was coming in from RIXOT (where it should have been at FL230 or below). The only published holding is over the Capdepera VOR (CDP), but your plane was circling before reaching that point, meaning it was either instructed to circle there by ATC or requested to do so themselves.

The likely reason for circling (as discussed in the comments) is to bleed off some altitude, which raises the question why the aircraft was too high in the first place. This could have been due to traffic, i.e. ATC does not allow an early descent due to conflicts with other planes, or because the crew expected to fly the full procedure. In the chart above, you can see that the RIXOT 2M arrival goes all the way to the Mallorca VOR (MJV), which is south of the airport. This would typically be flown when approaching on runway 06L/06R.

If the wind direction just recently changed, the airport would switch to landing on 24L/24R instead. While there are published approaches to these runways from MJV, it is much more common to approach via CDP or get radar vectors to final approach. If the crew expected an approach to 06L/06R, they would suddenly be at a much too high altitude. The best way to reduce the altitude now, is to circle before accepting radar vectors on to final.

Another reason for the 'spin' is to give time for the aircraft in front to either take-off (departure) or get off (landing) the runway. Its actually called an 'orbit' as in "left hand orbit for traffic". This is if you're far out enough.. too near and you'll be going around.

Not the answer you're looking for? Browse other questions tagged landing maneuver or ask your own question.

21
Did DB Cooper's aircraft land safely with the aft stairs open?
34
What happened during this foggy landing?
56
Instrument landing: why do all electronic devices need to be shut off?
14
Why did my instructor recommend that I fly a Piper Seminole down to the runway rather than trying to flare it like a Cessna?
3
Why would an airplane's nosewheel bounce during landing?
15
Why do I get a severe headache just before landing?
57
Did we get closer to another plane than we were supposed to, or was the pilot just protecting our delicate sensibilities?
14
Why did my LGA-ORD flight make an S-shaped turn round the time it was passing a storm?
6
What switch was Skiles talking about shortly before the Hudson landing?