How much can a plane benefit from another planes wake?

Could a smaller plane fly in a V formation behind a much larger plane to reduce fuel consumption significantly more than a plane its own size? At what point does flying in a larger planes wake become to turbulent or increased fuel efficiency stops? 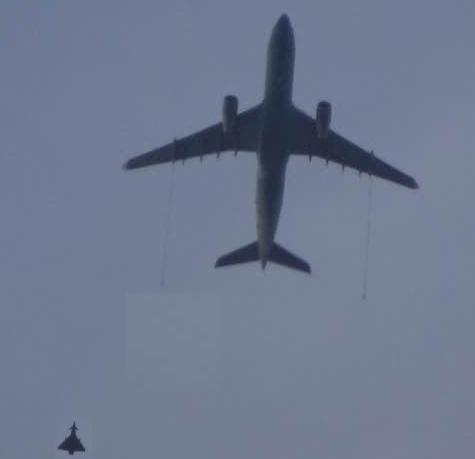 Related: How do planes benefit from flying in formation?

No, airplane wakes do not work like this. The streamlined body has very little wake, it is not like a cube shaped truck. The main wake on an airplane is found at the wingtips in the form of a strong vortex like horizontal tornado, aided somewhat by the down wash of the mid wingspan.

The tip vortex from a large plane will make a small plane spin like a windmill. A german bombardier challanger(mid size business jet) flew under an A380 at cruise altitude a few years ago and was turned over so hard the plane had to be sold for scrap, broke a one passanger's ribs, recorded near 4G force, lost 8000 ft of altitude before recovering control.

Not the answer you're looking for? Browse other questions tagged feature-identification efficiency turbulence flying-in-formation or ask your own question.

16
How do planes benefit from flying in formation?
1
Flying in V formation with multiple planes

16
How do planes benefit from flying in formation?
8
What is the official term of a plane flying under another plane to avoid radar?
47
Why is the Tu-95 so efficient despite having propellers that spin faster than the speed of sound?
17
Why is max endurance different for jet and props?
3
Would formation of the three planes benefit from increased distance of the ground effect?
18
Why would a B-29 consume more fuel at 17 kft than at 9 kft?
16
Can the plane Celera 500L be eight times more fuel efficient than a jet of similar size and capacity?
2
Can any conclusions about aerodynamic efficiency be drawn on the basis of fly-by noise?
8
Why does the optimum cruise altitude depend on the weight of the airplane?