Overall, the two very different methods of transportation have surprisingly similar amounts of emissions. The exact circumstances make each better in some scenarios, but overall airplanes are slightly better for the environment for a 2-person trip.

The general question here about cars vs planes has been studied in great depth by experts, so I'll refer to them wherever I can. The EPA, for example, published a detailed report1 on vehicle efficiency that's regularly updated. I've reformatted a table from that report here and made the assumption that only two passengers are in the vehicle.

The GHG's 2018 GHG Conversion Factors for Company Reporting reports similar numbers but with a different methodology.

Your question asked specifically about an A320. According to the the GHG's report, an A320 is about average in load factors and emissions except for (rare) long-haul. So if you chose an A320 and not an A380, your long-haul numbers would be even better than suggested by the table above. 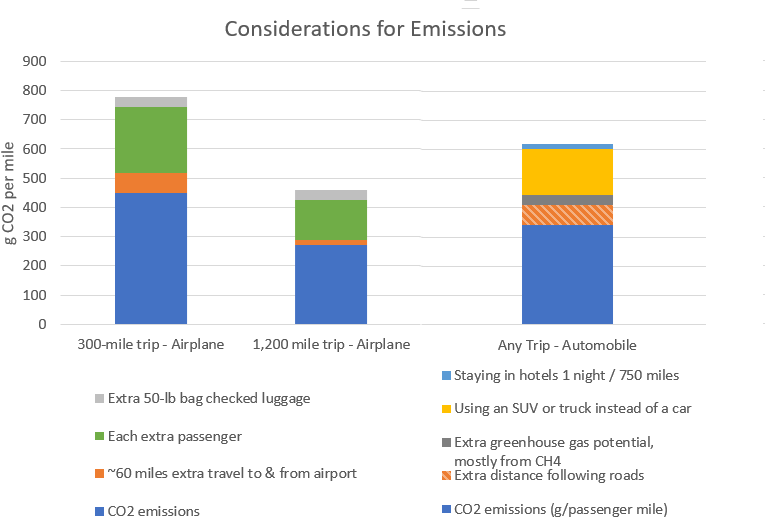 Some of these considerations are huge, although some other considerations like staying in a hotel room or the trip to and from the airport are pretty minor. It makes little sense to say air travel is better for the environment without adding that many automobile trips are, in fact, better because there are 3+ people travelling or the trip is short.

However, just comparing emissions per mile between the two is a little misleading. There are some considerations like

Contrails' climate effect makes for a similar apples-to-oranges comparison. Contrails cause enough heating for their effect alone on global temperatures to be measurable. However, contrails also go away after just about a day, while CO2 emissions stay around for decades, some of it taking several millennia to dissipate.

In regards to lbs of fuel consumed per passenger nautical mile the A320 unquestionably is.