Axis of rotation of tail surfaces

In cases where complete tail surface rotates (be it horizontal, vertical or at angle) what should be preferable axis of rotation of surface.

A "preferable" solution depends on many factors, both in aerodynamics and in design/construction. There is no single best solution for all situations.

On slow(er) subsonic aircraft with reversible control, the main concern is to provide convenient force on the yoke/stick. For symmetric airfoils, which are common for tails, there is a point at 0.25 chord where the hinge moment will be zero for all the operational range of deflections. To provide some positive force, you'll want to put the axis slightly ahead of this point.

However, there is another problem: stability with relaxed controls. If you move the axis too much forward, making the surface 'weathervane' with the stream, you reduce the control-free stability. This is an important consideration because when you are flying 'hands off' on a well-trimmed airplane, this is exactly the situation you are in. With classic hinged elevators, this effect is already quite noticeable, but with all-moving tails, it can be extreme, up to the total loss of stability. On the other hand, obviously, if you put the axis aft of this 25% chord, you'll have an outright unstable configuration.

So the ideal situation for such airplanes is to have the axis at 25% chord, but to create positive control force with springs or with an anti-servo tab, like on PA-28: 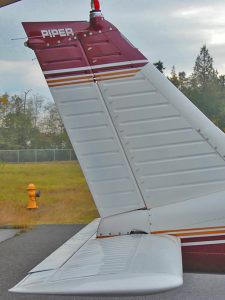 For supersonic aircraft, the situation is somewhat different.

First, their control is typically irreversible: the actuators take all the load. This means that the control-free stability problem doesn't exist; and the actuators can potentially control high (or even negative) hinge moments.

Still, you don't want to oversize the actuators unnecessarily. In addition, many (older) supersonic aircraft allowed for fully manual or assisted control in case of hydraulics failure, so the aircraft still had to be flyable by hand.

This again puts the best hinge location near the 25% chord point.

However, the second difference is the fact that at supersonic speeds, this magic 25% chord point (called aerodynamic centre) moves to 50%. On top of that, the relative efficiency of control (per degree of deflection) reduces, and this is actually one of the main reasons of using all-moving surfaces on supersonic aircraft. This, obviously, creates enormous hinge moments.

To reduce them, we could move the axis a bit back. This may create negative moment at subsonic speeds, but if we have a full-authority hydraulic control, this may be the optimal solution. Some 4th-generation fighters seem to follow it.

The third difference is that supersonic tails are often highly swept back. How do you align the axis then?

Again, there is no best solution for all cases. Aerodynamically and kinematically, the straight axis (on the left) is a bit better: it creates direct linear control. Structurally, it depends on how the stabiliser and the tail section are designed.

If there is a possibility to use a common shaft for both halves of the horizontal tail (which is typically true for T- and cruciform tails), this is a enormous advantage and it naturally leads to the straight axis. On the other hand, it is usually easier to integrate the shaft (or hinge points) along the spar of the stabiliser, which favours the swept axis for most swept tails. 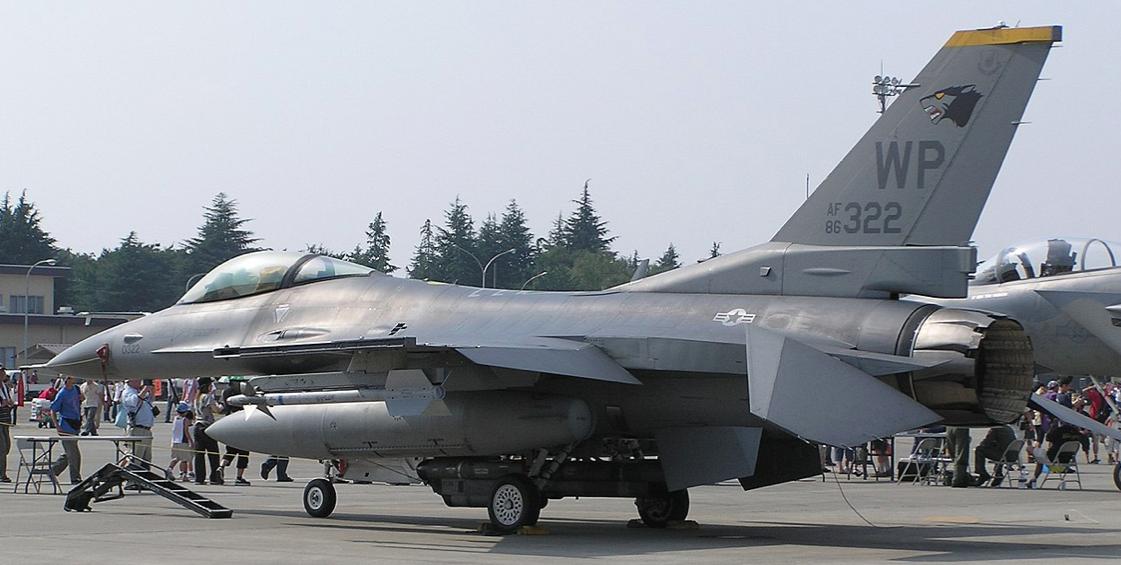 The axis of rotation of the F-16 stabilator can be seen on the picture. Design should be such that:

The most suitable axis of rotation would be the aerodynamic centreline, around 0.25 chord for:

For supersonic flow, the Centre of Pressure shifts aft and the aerodynamic centre of the surface is about 0.5 chord. For sweptback surfaces, there is relatively more area aft of the hinge line and the hinge should move aft.

This answer only addresses one particular facet of the question.

If we rotate a pair of surfaces (like horizontal stabilizers) around swept hingelines, we create an anhedral or dihedral geometry as we raise or lower the trailing edges of the surfaces, respectively.

This is a result of simple geometry, not obscure aerodynamics-- if this is unclear, consider sweep angles approaching 90 degrees.

In the case of all-moving horizontal stabilizers, this would tend to lead to a variation in the aircraft's overall amount of "effective dihedral" based on the fore-and-aft position of the control stick. This would generally be considered a disadvantage of this particular configuration.

By the way, the general principle we're noting here is true even for surfaces like flaps or speed brakes-- any matched pair of moving surfaces-- but lowering flaps or deploying speed brakes probably changes an aircraft's flight characteristics in so many ways that the swept hingeline's contribution to a decrease or increase in "effective dihedral" is not particularly objectionable.

1
What is the 'end plate' effect?
10
Why do the C-141 and C-5 have T-tails?
2
What is the tail strike pitch angle of the ATR-72?
2
How do I calculate the tail size of my rc plane?
6
Helicopter tail horizontal stabilizer angle
6
What is this little strake on Cessna 182 vertical tail?
5
How can an up-lifting tail have normal force direction and gradient when generating UP force?
0
How to determine the size and placement distance of vertical and horizontal stabilisers given the size of my wing? (it's a foamular250 glider)