After reading the post about B-2 sizing, I spend a couple of minutes on Google Maps looking at airplanes on the Whiteman AFB.

But there are also 3 more fighters at this location. 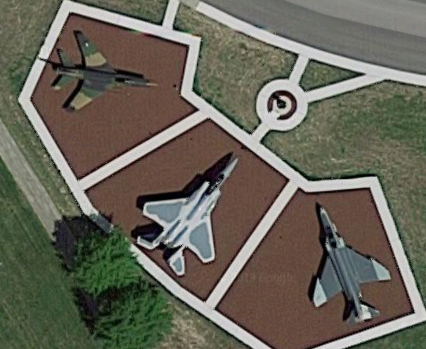 Center one seems to be an F-22 Raptor.

What are the two other ones? And is there any more static airplanes spread over this base?

F-100, F-15, and F-4. There is no F-22. The thing that looks like a brown nose cone on the F-100 appears to actually be the long, nose-mounted pitot boom, painted a light color, with its shadow visible just above it in the photo, all blurred together to give the impression of a much wider object. It's clear from the shadow of the fuselage that the fuselage truncates abruptly in front, as per the air intake of an F-100.

All these three types were used by the US Air Force.

Aerial Visuals has information about it, the neighboring aircraft, and other aircraft on display on the base.

This facebook page describes these three aircraft being moved to their current location, with closer photos of the F-100.

These three types were all flown by the Missouri Air National Guard 131st Fighter Wing, now the 131st Bomb Wing- a unit currently based at Whiteman AFB. Read more about it on this Wikipedia page.

From left to right:

Not the answer you're looking for? Browse other questions tagged aircraft-identification us-air-force or ask your own question.

1
What are the exact dimensions of a B-2 Spirit?

1
Do airplanes or helicopters ever fly at night using only white navigation lights?
11
What is this US Navy airplane seen at Westover AFB?
0
I just watched at least 20 airplanes flying northeast over Washington, DC every 15-20 seconds, what were they?