Why are several of the Tu-104’s cabin windows oddly positioned?

The Tu-104 (the fourth jetliner to fly1 and the second to enter revenue service2) has a cabin-window layout that is... somewhat odd, to say the least.

From front to back:

Why the wonky window work?

1: ...preceded by the Comet, Jetliner, and Caravelle.

I found a cutaway diagram of the Tu-104B. It appears that, at least on this model, some of the seats in the middle were raised a bit to perhaps accommodate some engine parts (there appears to be a label on the diagram which I can't quite read). The windows were raised correspondingly to match the seats. The mid-positioned one at the aft may have been placed there to match one in a door on the port side of the aircraft. The three high-positioned ones appear to be windows in the toilets (туале́ты). 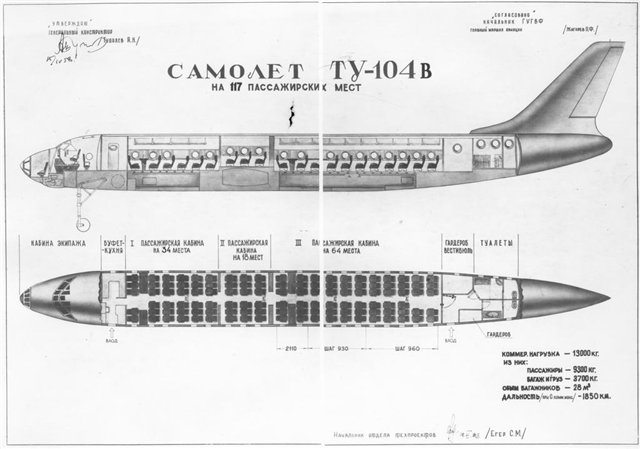 The seats in the middle are raised to accommodate the centre wing-box. Probably bigger/heavier than normal as the engines are mounted close to the wing root.

For the forward window, it looks like theres a work area opposite the entry door so the window would let in some light.

Not the answer you're looking for? Browse other questions tagged windows tu-104 or ask your own question.

58
Why do airplanes have rounded windows?
35
Why are some windows in cockpits made openable?
6
Why doesn't condensation form on the inside of airliner windows?
2
Why are the cabin inner windows so flexible?
28
Can cameras and LCD screens replace cabin windows?
35
Why do helicopters have windows near the pedals?