Why is the UH-60 tail rotor canted? 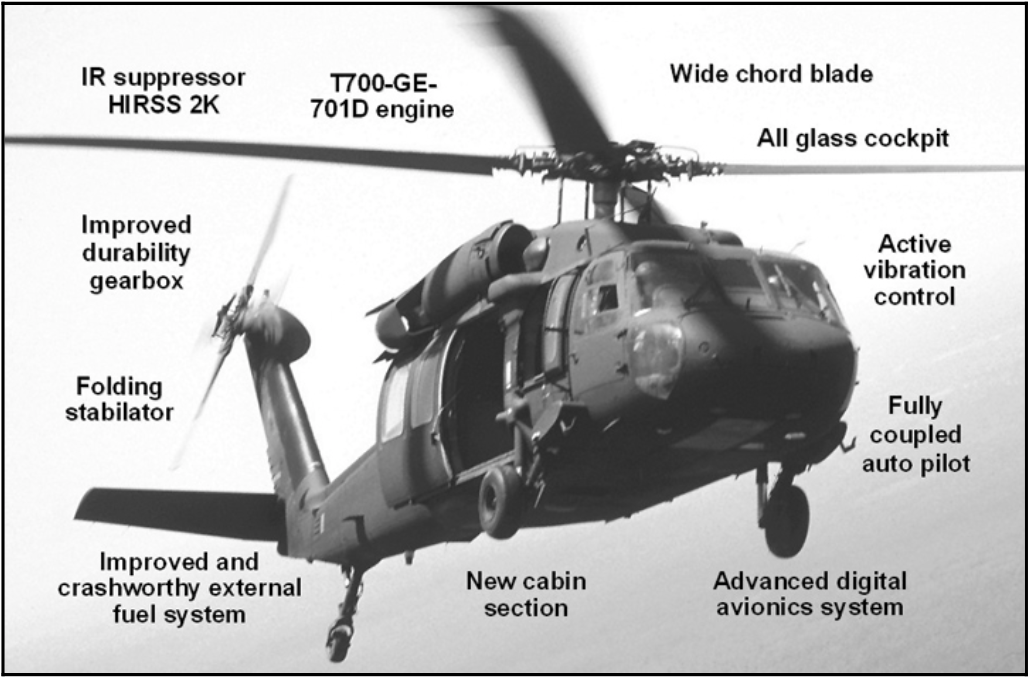 John K and Koyovis's answers are both correct. However, as a former pilot of the UH-60 and a mechanical engineer here is a simpler version.

A helicopter must be balanced. If the front is much heavier than the tail, then it can't fly safely as the nose is too low. If the tail it too heavy, then the same. The point of balance is called the center of gravity.

A guy in my glider club used to fly them. It's something to do with achieving a vertical lift component of several hundred pounds from the tail rotor's thrust, and that and the large horizontal tail allow a large C.G. range by helicopter standards, as well as adding a bit to the total vertical lift capability. You could say that it turns the machine into a sort-of quasi tandem rotor helicopter, with just a little bit of tandem-ness.

There is some kind of mixing system in the control system to deal with various cross coupling effects due to interactions between the tail surface and the canted tail rotor and main rotor, but which is transparent to the pilot.

I snooped around and found a paper that talks about the advantages of canted tail rotors here.

I came across this in Ray Prouty's book, Helicopter Performance, Stability and Control.

The best position for the centre of gravity on a single rotor helicopter is slightly ahead of the main rotor shaft.

In some cases, (an) aft C.G. position is forced by design considerations even during preliminary design.A classic example of this is the Sikorsky UH-60A. As explained in reference 10.13, this helicopter was limited in overall length by the requirement to load it into a C-130 without major disassembly. With the rotor sized by the vertical climb requirement, the air transportability requirement dictated a short nose. This and the desire to carry all the fuel behind the main cabin, led to a centre of gravity range of more than 15 inches, all located aft of the main rotor. Sikorsky more or less satisfactorily solved the resultant trim problem by canting the tail rotor, as explained during the discussion of tail rotor design.

Note that in the design phase, it would have been a lot simpler to shift the CoG forward by constructing a longer nose, but this was not possible and the more complicated canted rotor option had to be implemented. With a large useable range of CoG as a result.

Downside: the canted tail rotor introduces cross coupling between yaw and pitch, but since there are two control mechanisms for pitch (cyclic control as well) the pitch response to pedal input can be tuned by a control mixer. The stabilator helps at forward speed - it is also in the downwash of the tail rotor and can redirect some vertical tail thrust in the hover.

Upside: tilting thrust at small angles has large trigonometric effects. Thrust in the yaw direction reduces with (1 - cos20) = 6%, at a gain in the pitch direction of sin20 = 34% of tail rotor thrust.

The stabilator has a decided effect on effective lift with the tail rotor. It has a large range of travel, both up and down. This travel combined with the tail rotor thrust augmented by the 20 degree cant makes it a very balanced assembly. The UH-1 had a limited movement sync elevator mounted forward of the tail rotor arc which provided stability but not increased lift. This was how it was explained to me by a design engineer with Sikorsky and who was also an Army Aviator.

Gordon Galow the original designer of the helicopter for the US army now 98 years old said it was for the lift. Even at the small percentage angle of the blade it provided some lift. One of the most important components of a helicopters design was it's lift capability. Having in the 1960's spent time trying to develop a replacement for the Skycrane he designed as much lift into the helicopter as he could possibly get. Gordon Galow was considered one of the best Fluid Dynamic Engineers in the World.

In addition to the answer put forth siting Ray Prouty (The Man) tail rotors are canted in order to compensate for the forward tilt of the main rotor mast, allowing for a more level hover attitude.

Not the answer you're looking for? Browse other questions tagged aircraft-design helicopter flight-controls tail-rotor uh-60 or ask your own question.

1
Why does the UH60 have a titled tail rotor?
25
Why do some helicopters have the tail rotor mounted higher than the tailboom?
6
Are there any helicopter blades that fold in the middle?
3
In helicopter's forward motion, how is the forward pitching moment taken care off?

25
Why do some helicopters have the tail rotor mounted higher than the tailboom?
16
What are the benefits of a non-orthogonal (scissor) tail-rotor?
2
Why do No Tail Rotor (NOTAR) helicopters use an enclosed variable pitch fan?
11
What factors govern the placement of a helicopter's tail rotor (left or right)?
11
Why are the Constellation's nosewheels canted inwards?
6
Why do some helicopters have such complicated flight control mixers?
6
How much force does a helicopter's tail rotor counteract?
6
How does the Sikorsky X2 technology rotor control blade pitch?