Why does airflow separate from the wing during stall?

What causes the airflow separation from the airplane wing, that triggers a stall?

To be more precise, what is the detailed explanation of the physics for why flow separation occurs at certain speeds & angles of attack? 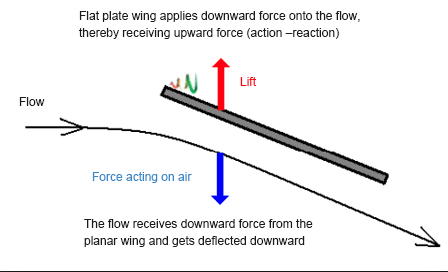 Air flowing underneath the wing at an angle is pushed downwards, regardless of the shape of the lower surface: high pressure has few practical limits.

Air flowing over the upper surface cannot suddenly change direction though because it is driven by an under-pressure gradient. It can follow a slowly curving surface to the limit of the pressure differential between ambient and suction, but too steep a curve and the airflow cannot follow and has to separate: a stall occurs. 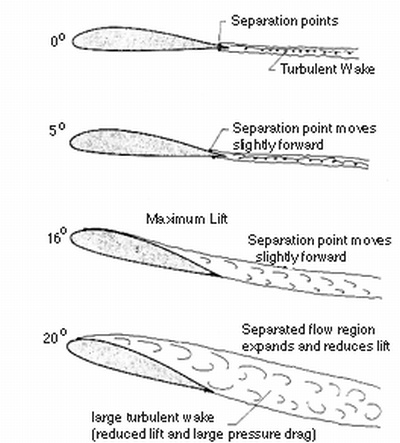 The flow separation commences at the boundary layer, due to adverse pressure gradients (from Wiki): 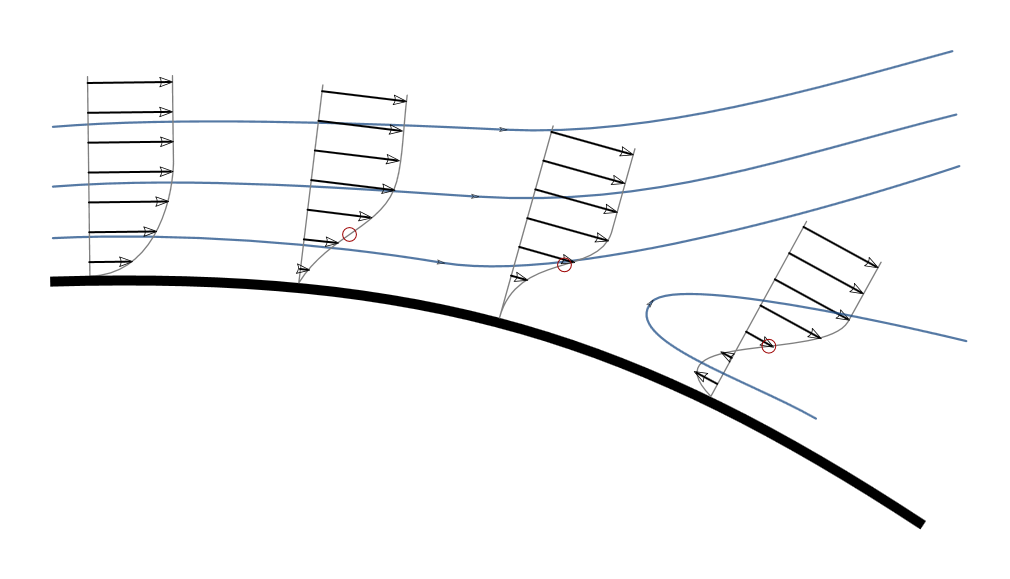 You can find a basic mathematical explanation in the linked article:

$$ {\partial u \over \partial s} = -{1 \over \rho}{dp \over ds} + {\nu} {\partial^2 u \over \partial y^2}$$ where $s,y$ are streamwise and normal coordinates. An adverse pressure gradient is when $dp/ds > 0$, which then can be seen to cause the velocity u to decrease along s and possibly go to zero if the adverse pressure gradient is strong enough.

In simpler terms, this means that the boundary layer on the upper surface of the wing is progressively slowed as it travels down the chord, until it cannot push against the higher pressure downstream. The air out of the layer can still advance, because it has higher momentum, but the bottom of the layer is forced to invert its direction, detaching from the surface.

As to where does this adverse pressure come from, it is because the accelerated air over the wing is at a lower pressure than the rest of the free airflow, so the air at the trailing edge pushes against the air over the wing (but cannot overcome its momentum).

Note that the flow is not guaranteed to fully separate at the point described above. This process can also force a laminar-turbulent transition, and a turbulent boundary layer can reattach.

Jan's comment and AEhere's explanation are essentially the correct answer, but let me rephrase it in plainer terms of energy, without explicit math.

As flow is deflected downward by the wing, its inertia resists being redirected. The wing is sucking it down, and it exerts a reaction force on the wing--this is lift. In the process, an area of low pressure is created at the top of the curve, where the wing and the airflow are tugging at each other.

The airflow around the upper surface of the wing (never mind the bottom side, because it contributes only a small part of the lift at useful angles of attack) first accelerates, moving from higher to lower pressure and thus converting its pressure surplus into speed (pressure energy into kinetic energy to be exact).

Later along the curve, the flow passes the point of minimum pressure, and starts moving against adverse pressure gradient, using up its kinetic energy to compress itself and move up the pressure "hill".

But, in the boundary layer right next to the wing, some of the energy has been lost to skin friction. Thus there is a deficit of energy in the flow, and it is unable to recompress all the way; at some point its store of kinetic energy runs out, and it stops. It separates from the wing and is swept along a different path, towards lower pressure above and behind the wing, gradually regaining energy from the air surrounding the wake.

Meanwhile a bubble of whirling air is attached to the tail part of the wing surface, where the flow was unable to reach. The bubble, being attached to the wing, generates no lift in that "dead" area. Therefore wing lift starts reducing significantly once separation begins (strictly speaking, once it grows beyond a certain small size). Furthermore, conditions become highly unstable once separation starts, as the affected area changes a lot with even small fluctuations.

And why does separation only happens once you exceed some angle, and not before? Because the incoming airflow has a reserve of kinetic energy to begin with, which is at first sufficient to make it past the adverse pressure all the way to the end of the airfoil. It's when the losses and pressure gradients grow more severe with increasing angle, that separation eventually occurs.

"Airflow separating from the wing" is actually a very simplistic explanation that should not be interpereted literally. Air is a compressible gas, and until you get near near supersonic flight, it is best to understand it that way.

Lower (underneath) wing lift increases linearly with AOA all the way up to 45 degrees, but becomes hugely draggy.

Upper wing lift (from the airfoil shape) is much less draggy, and is what you lose when the wing "stalls".

Change in direction of airflow actually begins ahead of the wing and is vital to its lift creation. What happens is when AOA gets too high, the air flow over the top becomes turbulent and disorganized, losing lift efficiency, while drag continues to rise.

The solution is to lower the AOA. Watching the many available wind and smoke tunnel films may be greatly helpful.

The answer it's about the DECELERATION of the airflow over the wings, due to the Increased AOA above the stall margins, then separation takes place from the wing roots and closer to the trailing edges and moves across the wings and towards leading edge and spread outward until reaching the wing tip (this is done by aeronautical engineers to preserve the ailerons efficiency little time after the wing started to stall) , at any speed . There are many videos on Internet that have wings with " taft's" on top on them for visualization of turbulence. At this highest level of the AOA (17-30 degrees depending on the wing profile) the first layer of the airflow is deflected from the wings surface because it is not energized enough to follow the upper side and unstuck from it. So the airflow is not accelerated on top of the wing 's surfaces .

4
What is the effect of airflow speed on separation?
2
What is the validity of doing 2D airfoil simulation for axisymmetric bodies?

35
How does stall depend on angle of attack but not speed?
11
What causes stall buffeting?
5
When approaching stall, why does the center of pressure move back?
6
Can this vane prevent/delay wing stall?
14
Why does a stall decrease lift, rather than increasing it?
1
How do aircraft stall warning systems handle (or not) asymmetric-stall situations?
7
Why do aircraft stall warning systems use angle-of-attack vanes rather than detecting airflow separation directly?
2
Why does the effective alpha/CL increase at wingtip of swept wing?
3
Why doesn't Concorde stall when passing Mach 1, where a normal airliner does?