How possible is a successful landing just with 1 wing?

Having in mind this famous F-15 incident :

This would be possible with other fighter jets that are of similar design to the F-15, i.e. have a low aspect ratio, much of their lift produced close to the centerline, and a lot of control authority. They would also need the other two key ingredients for a landing of this kind: a strong aviator at the controls and a bit of luck.

If you look at the planform, it wasn't missing a full 50% of its wing, but only about 20% of its lift-contributing planform area (lift distribution isn't equal across it of course), with the body, the intakes and wing root strakes continuing to provide lift. As a result, the center of lift didn't move as far away from center as it would have for a tube-with-wings design.

In principle this is a more violent version of a runaway aileron scenario, and one has to compensate for roll from the lost wing area. The F-15, being a fighter, has large control surfaces for combat maneuvering, and they proved sufficient for stopping the roll in this case. The loss of lift was not so much of an issue. 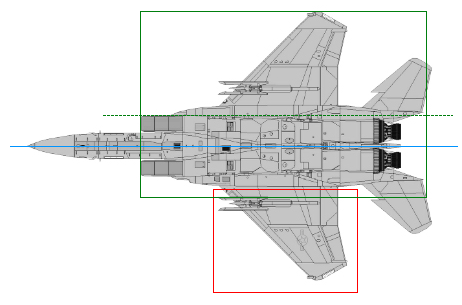 The red box is the lost area, the green box the remaining planform, and the dashed line its very approximate center.

It's possible that other fighter aircraft could do something similar. Commercial aircraft, however, almost universally feature high aspect ratios, and with such a wing, the center of lift will move too far away from the design centerline in a similar scenario. Partial wing loss, however, can be compensated for, and there's a lot of incidents where planes landed having lost some part of their wing.

It is definitely possible to lose an entire wing and still control the plane if the plane is capable of knife-edge flight. Check out these videos of it being done-- ending in amazingly successful landings -- with radio-controlled planes. Of course a full scale-plane being flown in this matter would impact the ground with much more energy in relation to the strength of the structure, but these videos suggest it still might be survivable at least with aircraft similar to the ones represented by the radio-controlled models. Of course, not in any commercial airliner, and the odds of success with this particular technique would surely be slim in a heavy military jet as well.

Also, beware the well-known hoax video that purports to show something extremely similar with a full-scale airplane with the logo "KillaThrill" emblazoned on the side. It is actually a mix of full-scale and RC footage and no wing was actually lost by any plane in that video.

It's interesting to note that if you want to use an alternative technique involving flight in a near-level bank attitude, then full-span ailerons are a disadvantage and may make it impossible. You want a powerful (wide-chord) aileron near the wingtip generating lots of downward roll torque, leaving the rest of the wing free to make positive lift.

Not the answer you're looking for? Browse other questions tagged landing aircraft-physics f-15 or ask your own question.

18
Why do modern jetliners provide Thrust Reversers at all in their design decisions?
7
Can an airliner land safely using only propulsion control?
3
Is every emergency landing of a commercial flight documented?
8
What are the pros and cons of practising figure-eight landings on perpendicular runways?
14
What would be the challenges to taking off and landing a typical passenger jet at FL300?
5
When is it appropriate to foam a landing strip? (example JB292)
2
Which way to turn to return to runway for downwind landing-- into crosswind or with crosswind?
2
Can you have a Hybrid Turboprop-Jet engine?