What is the function of interplane strut of a Biplane?

The wing strut prevents the lower wing from bending upwards due to the lift forces.

The biplane is a truss structure: rectangular shapes are "crossed out" by diagonal structural members, in order to create triangular shapes with only tension and compression in their structural members, no bending. If the diagonal is a rod, it can transfer both compression and tension forces and only one diagonal is required. If it is a cable, it can only transfer tension forces, and the other diagonal needs to be crossed out by a cable as well.

In flight, lift wants to bend the wings upward and lengthen the diagonal, which becomes tension loaded. The upper wing is then prevented from bending upwards and becomes compression loaded.

The method of how to compute the force is in this answer. In a truss structure the intersection points are modelled as hinges, and the structure members are dimensioned to carry the resulting tension/compression loads.

It carries compression. The compression force is the share of the lower panel's lift being borne by the interplane strut's connection to the lower wing. So to calculate the compression load for, say 1G flight at gross weight, you simply need to determine the lift force present at the interplane strut's attachment based on the wing panel's loading and the attachment's location in the lift distribution of the panel. It's going to be somewhere in the range of half of the total lift being produced by the lower panel.

The ONLY member in significant tension in this structure is the flying wire (the red shows what happens if the flying wire breaks), and in most biplanes with center sections and single bolt jointed structures at the fuselage attachments there are no bending loads at all, except airloads pushing up on the spar beam along its length. 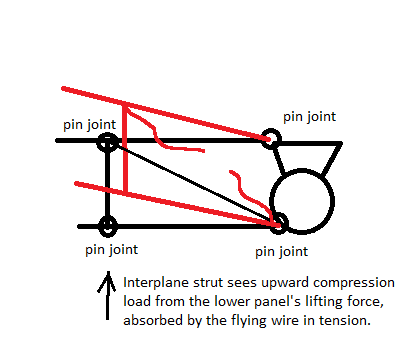 Not the answer you're looking for? Browse other questions tagged aerodynamics wing aircraft-structures biplane or ask your own question.

5
What is the function of cross bracing of interplane strut?
2
How much lift does the wing attach fitting actually carry?

2
How to determine the compressive force in the spars of a strutted wing?
2
How much lift does the wing attach fitting actually carry?
5
What is the function of cross bracing of interplane strut?
2
Where is the compression on a compression strut in a tube and fabric airplane coming from?
5
How to calculate bending moments and shear forces on a wing?
6
What's the wisdom of attaching an aircraft lift strut to a wing spar utilizing a single eye bolt vs the common two plate or strap method?
23
What is this strut in biplane rigging, attached only to wires, not bearing any load?