Compression and tension members of a biplane wing

It's not a tension member in that sense. This is a pin jointed truss with flexible tenion-only diagonals. The lower wing is a non-cantilevered beam, that is, supported at both ends, so it will bow up in the center under load with flight loads, and this applies a modest tension load at the root (as well as pulling the bottom of the interplane strut inboard, to the extent that deformation occurs in the main spar beam). If the lower wing's spar had perfect rigidity and didn't bend at all, there would be no tension load at all at the wing root; it would be all vertical shear.

If you thought of the lower wing as a sheet of fabric, and imagine that the interplane strut at the outer end was rigid vertically, you'd have basically an upside down hammock, and when you lay in a hammock, the attachments are under tension (of course, the outer interplane struct not being rigid vertically, the hammock would collapse straight up - in the biplane's case the lower "hammock" is a semi-rigid length of lumber that only deflects slightly so the outer interplane strut doesn't have to be vertically fixed). So the extent of any tension load at the root fitting for the lower wing, it's only to the extent that there is a hammock effect happening as the spar deforms.

To get the lower wing to work in tension as part of rigid truss system with the upper and lower wings integrated into it, the X of diagonal wires have to be replaced with rigid struts that can take compression. The rigid strut running down from the upper root to lower tip would be in compression, sharing load with the other one in tension, and this would make the lower wing a tension member in the system. But with tension-only flying wires, that doesn't happen. 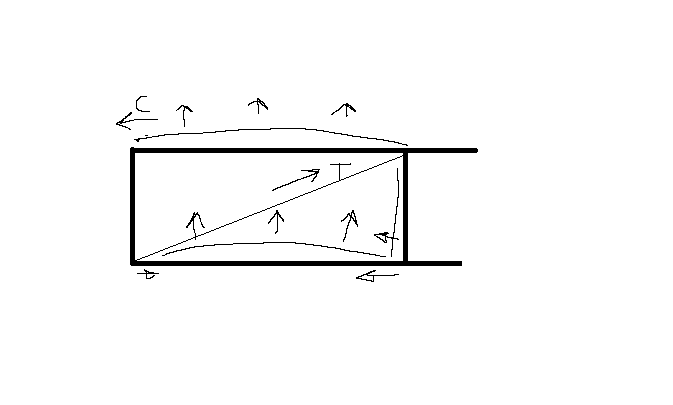 Not the answer you're looking for? Browse other questions tagged aerodynamics aircraft-structures biplane or ask your own question.

15
Why do older airplanes have a wing on both the top and the bottom of the aircraft?

27
If the profile of a wing pulls a plane up, why can planes fly inverted?
8
Why does condensation form on the wing especially during take-off and landing?
5
How do you calculate total drag on a wing?
9
Can you identify this plane from 1920 and prior vintage?
0
Pressure Distribution Pattern around Wing
5
What is the function of cross bracing of interplane strut?
2
Where is the compression on a compression strut in a tube and fabric airplane coming from?
2
Elliptical wing planform and elliptical lift distribution
4
What's the wisdom of attaching an aircraft lift strut to a wing spar utilizing a single eye bolt vs the common two plate or strap method?
2
Why is air accelerating over the wing surface?