Why does the use of reverse thrust in flight on the DC-8 cause areas of separated/reversed airflow over the wing?

The DC-8 is one of only a few jetliners that can safely use reverse thrust in flight; even so, reversing the inboard engines (the outboard engines can only be reversed on the ground) while flying still produces extensive airflow disruption over the wing’s upper surface in the vicinity of the reversed engine(s), as detailed in this excellent PDF documenting a series of flight tests carried out by NASA on their DC-8-70. A significant area of separated flow extends from leading to trailing edge (wider at the trailing edge) whenever the inboard engines are reversed below approximately mach 0.88, and becomes very large (covering over a third of the upper wing surface) below approximately mach 0.6; additionally, at mach numbers of 0.6 and below, an area of full-on reverse airflow appears over the trailing edge, in line with the inboard engine.

This would make perfect sense if the engines extended aft of the trailing edge, in which case the reversers would blow air forward and over the wing, but that isn’t the case for the DC-8; instead, the DC-8’s tailpipes (even on the DC-8-50 and -60, with their long, cigar-shaped JT3Ds) are placed under, or just behind, the wing’s leading edge. If anything, one would expect the use of reverse thrust on a DC-8 to strengthen the airflow over the wing, instead of disrupting it, due to all that forward-blowing air piling up around the engine and under the leading edge and helping to partially block air from passing under the wing, forcing it to go over the top instead. So why does in-flight thrust reversal on a DC-8 instead produce large areas of airflow separation (and, at lower speeds, even airflow reversal)?

That's not surprising at all. What the pictures of the tufts show, and exactly what I would expect to see, is a massive injection of turbulent reverser air into the upwash just ahead of the LE, disrupting everything behind it, and which would include a significant component of flow over the top of the wing. The tufts show some straight and some pointing forward, which suggests a layer of very turbulent air with random eddies. Like this: 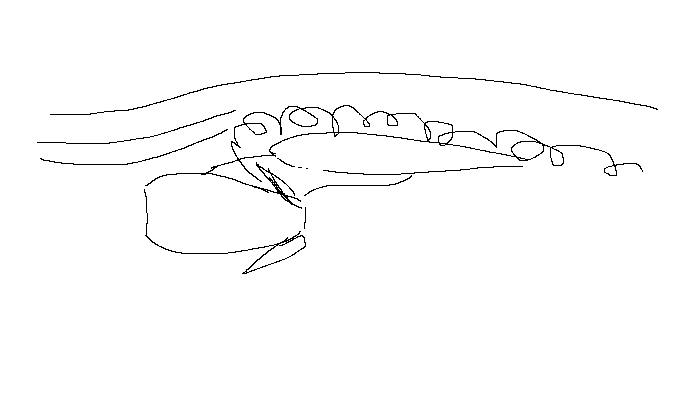 Not the answer you're looking for? Browse other questions tagged aerodynamics wing thrust-reverser dc-8 or ask your own question.

19
What makes it safe for the DC-8 to use reverse thrust in flight?
6
Why does the use of reverse thrust on the DC-8 generate a pitch-up moment rather than a pitch-down moment?
2
Are aircraft certified for inflight thrust reversal required to demonstrate controllability in an asymmetric-reverse-thrust scenario?

8
Where is the spanwise flow? How does the span wise flow point the air towards the wingtip?
19
What makes it safe for the DC-8 to use reverse thrust in flight?
5
Do leading edge flaps increase the critical angle of attack?
6
Why does the use of reverse thrust on the DC-8 generate a pitch-up moment rather than a pitch-down moment?
2
Visualising downwash over a finite wing
5
Is airflow deflected inwards or outwards by wing sweep?
2
Are aircraft certified for inflight thrust reversal required to demonstrate controllability in an asymmetric-reverse-thrust scenario?
1
Does the quarter-chord-angle rule still hold for wings with very long chords or large differences between leading- and trailing-edge sweep angles?