Why do wingtip vortices affect the upwash ahead of the aerofoil?

I understand that wingtip vortices increase the downwash aft of the aerofoil and the theory that they will alter the effective airflow angle, reducing effective angle-of-attack, with the total reaction of lift acting at 90 degrees to Effective airflow, not the relative airflow which now has an extra component of induced drag.

But why does this happen? How do the vortices increase the upwash ahead of the airfoil when they occur rearwards of the wing?

This is a fascinating topic, and it really boils down to the mechanics of lift. Physically, upwash and downwash are generated as the air accelerates/decelerates and curves around the LE of the wing. At the wingtips, higher pressure air curves upward and generate the vortices we are familiar with. In fact, there are vortices generated at the trailing edge of the wing, too, just not as noticeably. Obviously, this picture is unsatisfying since it doesn't give us any insight to lift.

According to the potential flow theory (irrotational, incompressible and inviscid), lift is generated whenever there is a net circulation of air. A particularly successful model, the Lifting Line Theory, models the span of the wing as a collection of U-shaped horseshoe vortices: there's a bound vortex at the span location, and two trailing vortex arms extending to the far field.

So there you have it. A tiny downwash is generated by an individual vortex as it turns the flow downwards at that location, and a tiny upwash is generated as it turns the flow upwards. If you proceed to do the math and sum over all the influences at any point on the span, the net effect is a downwash (which changes the effective AOA and gives rise to induced drag as you mentioned).

If you do the same for a location ahead of the LE, you will get a net upwash, and inverse for TE. This seems intuitive: if you zoom out and treat the whole wing as one single circulation, the circulation should be clock-wise (assume air comes from the left), with air moving upward to the left and moving downward to the right.

There are more complex models, like vortex lattice, vortex panels, etc. But this theory is fairly intuitive and introduces the induced drag. By the way, induced drag is a finite span phenomenon. If you have an infinite span, you fully recover the 2D lift coefficient and the induced drag disappears, even though the vortices remain.

Although tip vortices are usually thought of as a little horizontal tornado emitting from the trailing edge wing tip, it's actually a large flow field extending ahead and behind, and also beyond, the tip. Both the upwash and the tip circulation flow starts well ahead of the wing. It's just most intense near the tip's surface toward the back.

You can see this if you examine a winglet standing under it and notice that its airfoil's chordline is pointed outboard a couple degrees to maximize the AOA in the tip circulation, because the circulation flow field was started well out front and the flow is already curving inboard at the winglet's leading edge. 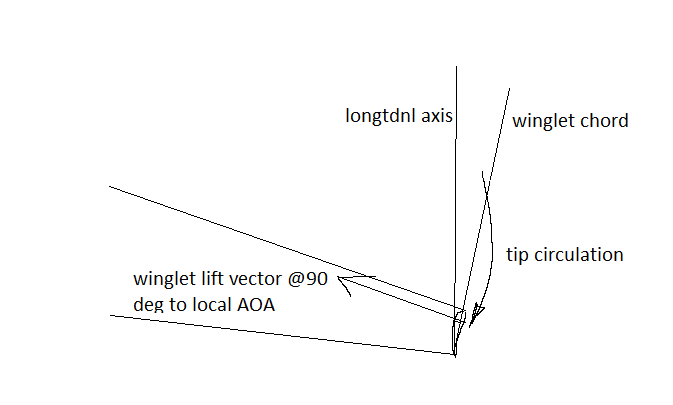 So farther inboard, it's just the upwash "bow wave" of the moving body of the wing ahead of it, but toward the tip the upwash is already starting to circulate around to the top, while it's still upwash, so the net angle is higher.

Not the answer you're looking for? Browse other questions tagged aerodynamics wing wing-tip-vortex fluid-dynamics or ask your own question.

11
Does the downwash created by induced drag increase or decrease lift?
6
Do wingtip vortices really only form when airplane wheels are separated from the ground?
10
Why do wall-to-wall airfoils in wind tunnels produce no (or infinitesimal) downwash?
2
How do endplates reduce induced drag?
2
Why does the effective alpha/CL increase at wingtip of swept wing?
3
How does downwash affect angle of attack?
2
Explained intuitively, why does aspect ratio affect induced drag?
3
How can one change the wingtip geometry to enhance the wingtip vortices?