Based on PANS-OPS, what is the earliest turning point that can be used in a missed approach?

I am studying ICAO's PANS-OPS 8168 manual, and I have noticed conflicting guidelines regarding the permitted earliest turning point during a missed approach.

6.2 Climb Gradient and MOC. 6.2.1 Initial Phase. 6.2.11. The initial phase begins at the earliest missed approach point (MAPt) and ends at the start of climb point (SOC). The manoeuvre during this phase requires the concentrated attention of the pilot, especially when establishing the climb and the changes in configuration, and it is assumed that guidance equipment is not utilized during these manoeuvres. No turns may be specified during this phase.

6.4.7 Turn Specified at the MAPt. Where the turn is specified at the MAPt, which means that the pilot is supposed to establish the aeroplane on a climbing path and then to turn, the OCA/H will be taken as the turn altitude/height and the turn initiation area will extend from the earliest MAPt to the SOC (see Figures I-4-6-10 and I-4-6-20). 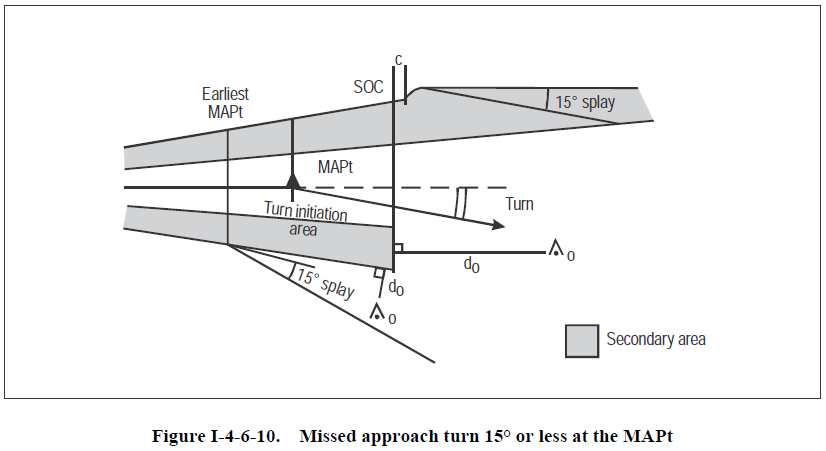 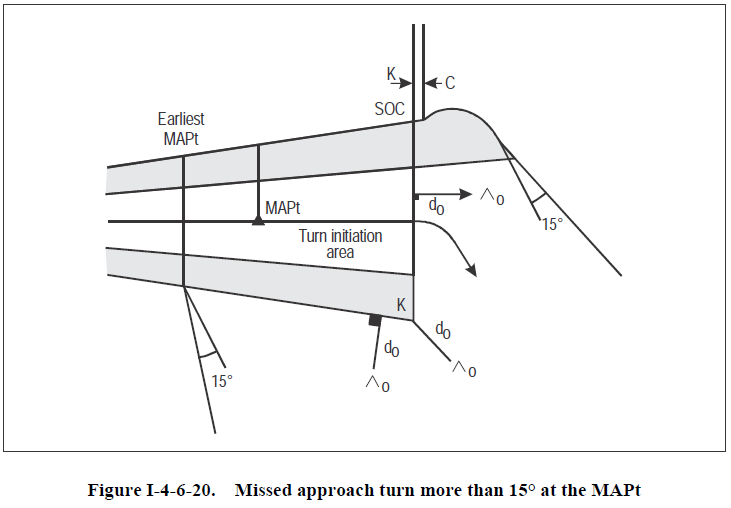 Additionally, in section 6.4.5 (Turn initiated at a designated altitude height), it states:

b) after a climb using the minimum required gradient from the SOC to the point where it reaches the specified altitude height. This point is called the Turn Point (TP).

In Figure I-4-6-11, one of the potential turning points is depicted near the MAPt, well before SOC. 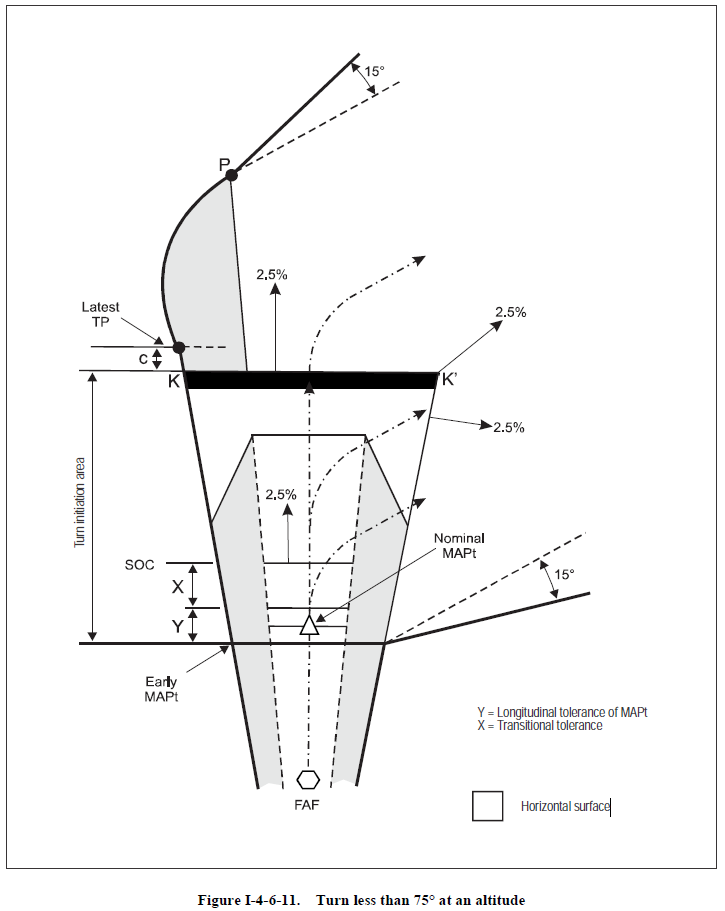 All things considered, I can not figure out the earliest point where turning is allowed to be initiated, during a missed approach.

Could someone help me clarify this?

I can not figure out the earliest point where turning is allowed to be initiated, during a missed approach.

It is up to the designer. Nothing in PANS-OPS prohibits turns before MAPt but in that case an additional area extending from the earliest FAF needs to be protected as shown in figure I-4-6-14 PANS-OPS Vol. II.

Because early turns are not always feasible, advisable or convenient, we often disallow turns before MAPt, in which case a note to the effect will be added on the profile view of the approach chart. Any turns >15° will then be executed in the final missed approach area (Vol. II I-4-6-10 6.4.6.3.1).

Not the answer you're looking for? Browse other questions tagged missed-approach procedure-design pans-ops or ask your own question.

5
How soon can I start my turn after reaching the missed approach point, when missed approach procedure calls for a climbing turn?
6
When to go missed on a non-precision approach?
3
When do I execute a missed approach on a LOC approach when I can't identify the MAP?
4
Does a straight missed approach require all turns to be less than or equal to 15 degrees?
1
How do designers determine the altitude profiles of neighboring procedures for deconfliction purposes?
1
Is the arrival segment of an IAP in PANS-OPS the equivalent of FAA's feeder route?
15
Why is the missed-approach course for the "RNAV (GNSS) - A" approach to runway 28 at ENSB shaped all funny?
1
What is the visual manoeuvring area (circling approach) radius for PANS-Ops (ICAO)?
1
During an LPV or GLS final approach, can the extension of the aircraft's cross-section line intersect with the Y or X OCS surfaces?