Why did the Bede Bd5 have strakes on the horizontal tail?

Why did the Bede Bd5 have strakes on the horizontal tail?

They work like large vortex generators to delay flow separation on the underside when the stabilator is at high (leading edge down) angles at low speed. IIRC, the BD-5 had stabilator stalling issues during development. That's one way of doing it. Another way is to put VGs along the underside leading edge.

The Cessna Cardinal had a similar problem when it first entered service and Cessna's fix was to put LE slots in (a famous Service Bulletin known as the Cardinal Rule, with a comprehensive fleet mod campaign for the initial 500 or so aircraft), more or less for the same effect. 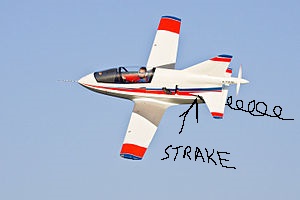 8
Are the vortex generators on the Cessna Caravan necessary and sufficient for safety of flight?