Is it possible for crew oxygen to exacerbate a flight deck fire?

Crew oxygen is, as I understand it, a very high percentage of purity.

Oxygen-enriched air acts as an accelerant to a fire, causing things to ignite which wouldn't in ordinary air, and making fire more difficult to put out. Nice illustration of what oxygen-enriched atmospheres can do to shirts: here, p. 5. This also says that hair and clothes can trap oxygen, and this can be very dangerous. A spill from a mask might well accumulate in hair and clothes.

Also, although I'm not a chemist, it does appear that the margin between normal air and dangerous oxygen-enriched air is quite a slim one: this document says that at over 23% concentration "mixtures must be handled with all the precautions and care of pure oxygen as they start to change fire chemistry and enhance combustion."

In the event of flight deck depressurisation occurring simultaneously with a fire, and the crew using their bottled oxygen, could the following events pose a serious danger:

Not an aviation person so don't know how often emergency mode actually gets used, but if the FD were filling with smoke wouldn't you switch to emergency mode to try not to be breathing it in? But could this exacerbate the fire?

Unless my thinking is flawed in some way, wouldn't that mean that descent to an altitude where you no longer have to use oxygen might be quite an important priority in the event of a FD fire? Or maybe blowing an inert gas like argon into the FD*?

Just a final thought: oxygen-enriched fires also burn at particularly high temperatures (Apollo 1, EgyptAir 667). So the danger of such a fire actually destroying navigational or communication equipment and effectively killing the plane might be greater.

* High-concentration argon poses its own danger but for this specific situation, where the crew are on bottled oxygen, it might be OK until the fire was out.

Wouldn't [a] descent to an altitude where you no longer have to use oxygen might be quite an important priority in the event of a [flight deck] fire?

It is an important priority. Below is the first page of the procedure for the Airbus A320: 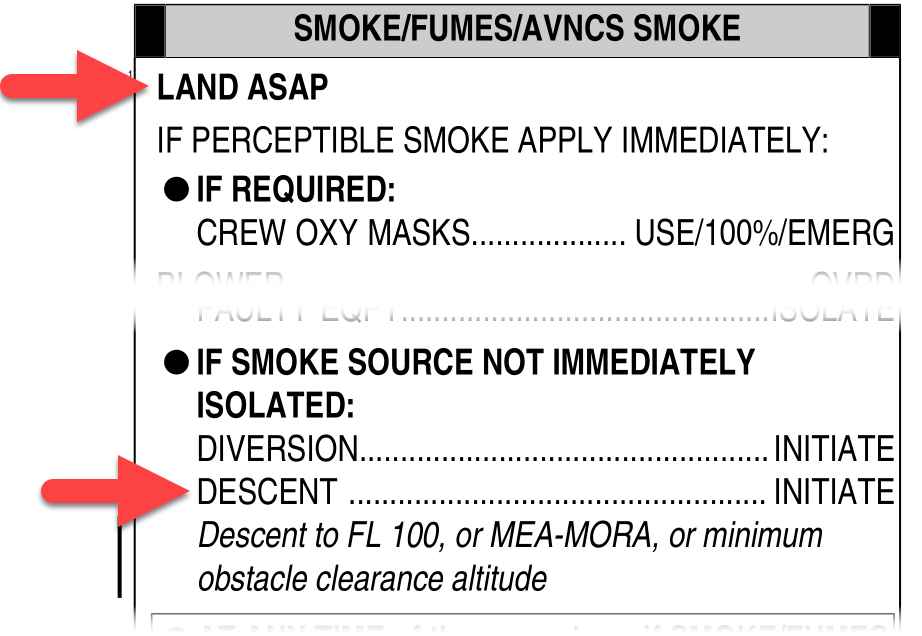 Going through the procedure, if things got out of hand, there is:

And even opening the cockpit window is an extreme option for smoke that is too much to be ventilated.

So it's the opposite, one would link pressurization with oxygen saturation.

One of the items on the smoke checklist is turning off the air supply systems (called PACKs) and using the manual system to deliberately depressurize the plane:

"MAN V/S CTL" means "Manual Vertical Speed Control", basically how the cabin altitude (a pressurization term) is set. Full up means max positive rate, which will equalize the pressure with the outside – dumping pressurized air so to speak.

Not the answer you're looking for? Browse other questions tagged safety cabin-pressure fire oxygen or ask your own question.

16
Is a dancing crew dangerous?
16
Why don't airlines provide smoke hoods?
12
Can we eliminate the center tank of large passenger planes?
8
How can an airline flight crew handle an in-flight oxygen system fire?
52
Why don't commercial passenger safety videos ever explain policy instead of merely dictating it?
8
Is it safe to fly on airplane with lithium batteries in cargo hold?
13
Is if safe/legal for an aircraft to return to cruising altitude after passenger oxygen masks have been deployed?
5
Is the F-16 capable of taking off during a nerve gas attack?