What is the best or most popular way to reduce wing tip vortices on an ultralight operating at 600-800k Re?

What is the best or most popular way to reduce wing tip vortices on an ultralight triplane, operating at 600-800k Re with fibreglass wings ,10 ft wingspan, gap of 2 chord, chord of 2 ft, 0 stagger?

For a triplane with very short span, it might be worth it to make a kind of end plate fin joining all three wings. Problem is, the end plate itself will create a lot of drag, so it comes down to whether or not inhibiting the tip circulation with that sort of end plate gives a benefit that outweighs the drag of the plate itself.

If your triplane will cruise at high Cls (low speeds relative to stall) where the vortices are strong, the inhibition effect of the end plates may be net positive (like with winglets on jets). If the thing will cruise and 2 or 3 times stall speed, I would expect that the drag of the plates cancels or outweighs the benefit. Which is why it's not done very much even with all those biplanes out there where you'd think it's a no brainer to "wall off" the wing tips.

Beyond that, I'd suggest a triangular "Wittman type" wing tip ( Steve Wittman was a famous air racer, who developed these tips for the Tailwind) which is a good way of dissipating the tip circulation on low aspect ratio wings while providing a little extra area and span with minimum additional wing bending. That could be the best bang for the buck for your short span application. They were very effective on the Tailwind. 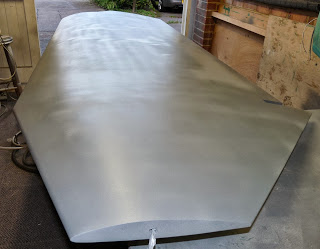 Not the answer you're looking for? Browse other questions tagged aircraft-design aerodynamics ultralight or ask your own question.

4
What kind of dihedral would be most stable?
10
Why do wall-to-wall airfoils in wind tunnels produce no (or infinitesimal) downwash?
1
How does wing aspect ratio influence lift and drag?
1
Is it possible to design a GA plane with a 5' -10' wing span?
2
Why does the effective alpha/CL increase at wingtip of swept wing?
2
Wouldn't a triplane be much more efficient than a monoplane of same wing area?
2
Would a triplane be way more efficient if the wings intersected at the tips to create one wing tip vortex instead of 3?
2
Cascading Wings: Do they really increase lift by 300%?
2
What are the disadvantages of a tailless ultralight design?