Why do most airliners have underwing engines, while business jets have rear-mounted engines?

I am of course aware of the many past airliners with rear-mounted engines, with the DC-9 and MD-80 and later derivatives continuing into production until rather recently, but it still seems fair to say that the underwing configuration dominates modern airliner design.

Meanwhile business jets exclusively use the rear-engine design, unless one counts small airliners put into business service such as the Boeing Business Jet. Does the underwing engine design simply not scale down well to something the size of a smaller business jet?

Here's a related question with good answers but still doesn't really answer my question-- How does the mounting location of a jet engine affect aircraft performance?

One key factor now occurring to me is that business jets are boarded with self-contained airstair doors/ steps so a fuselage sitting high off the ground would be problematic. Airliners with long fuselages perhaps may need rather long landing gear to provide adequate ground clearance for rotation anyway-- although the DC-9 / MD-80 with its wing and landing gear far to the rear did sit rather low to the ground-- still in the airliner situation perhaps there simply is not as much benefit to having a low-sitting fuselage as there is in the business jet situation.

Of peripheral interest is this Wikipedia article on "airstairs", pointing out some cases where full-blown airliners are equipped with airstairs. One of the more interesting lines is:

The most unusual airstair design was found on the Lockheed L-1011, which was a full-height airstair which was stored in a cargo compartment and allowed access from the right aft passenger door to the ground. This design was ultimately so large and heavy, and it took up valuable cargo space, that it was rarely used.

Underwing engines have more advantages for larger planes, but there must be enough room underneath the wing to mount them. 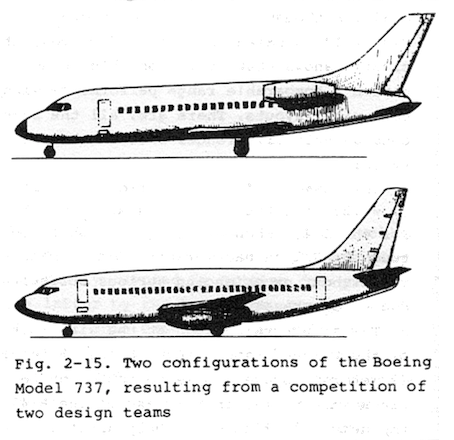 In smaller planes, the wing bending & twisting moment is a relatively smaller constructive issue than in larger planes. And indeed, being closer to the ground allows for easier boarding via air stairs.

Airliners are designed for loading from elevated passageways at airport terminals. The terminal comes to the door you might say, so it doesn't matter so much how far off the ground it is. And absent a terminal gate, you can always use an external staircase you move to the plane for the passengers/cattle to climb.

Business aircraft are designed to be boarded from the surface, traveling from limo to cabin in a luxurious, exclusive manner, usually using an airstair door. You need a fuselage close to the surface for an airstair door to work. This pretty much precludes underslung engines.

And if you did insist on trying to squeeze in a set of underslung engines under the wings, they'd be so close to the surface they'd ingest every sand grain and pebble.

The single reason why an underwing design is unfeasible for smaller jets is just ground cleareance.

There are several reasons why smaller jets have lower ground clearance.

For once, higher ground clearance requires longer landing gears. These have to be stored in flight and take up valueable space and weigh more. On larger planes, the gear has to be sturdier anyways thus they need heavier and larger gears anyways since they have longer fuselages and more overall weight. In turn this reduces maximum range and payload of the aircraft and that is generally something you'd want to avoid.

Also a lot of smaller jets operate on smaller airports. Smaller airports have fewer gates with passenger bridges / stairs available (if they have any at all) and using a gate with one usally is attached to quite a hefty fee.

Considering that many business jets also have long durations of waiting on the ground, they are unlikely to ever be used at a gate with a passenger bridge anyways. Thus passengers have to be able to (dis-)embark easily without stairs / passenger bridges as they often will use GA parking spaces.

You can see that mostly on smaller jetliners too like the smaller Embraer or the McDonnell Douglas planes. The smaller designs tend to use rear mounted engines as they have a very low clearance below their wings.

33
How does the mounting location of a jet engine affect aircraft performance?
21
Which are more efficient in putting out wildfires: planes or helicopters?
17
Why are modern regional jet designs shifting towards under wing engines?
10
How and why does the ATR-72 sometimes use reverse thrust to push back from its parking position?
4
Why are overwing engines so rare?
6
What adds more weight to a twinjet? Tail-engines or wing-engines?

29
Why do we use pylons to mount the engines on jetliners?
18
Was the 727 the last airliner whose doors could be opened in flight?
6
How is the center of mass controlled in planes with multiple tail engines?
16
Have we seen the last significant experiments in the configuration of jet airliners?
10
What role, if any, does visual aesthetics play in the design of modern airliners?
9
Why do cargo aircraft still have floors?
4
Eviation Alice Powerplant Placement
18
Why have propeller engines never been mounted on the tail in production transport aircraft?
3
Are horizontal engine pylons generally shaped to provide lift (in either direction)?