What does the NCrit parameter indicate in a CFD analysis?

When analyzing an airfoil in the XFLR5 software I am asked to input some data regarding the free stream. For this, a dialogue box pops up that has the following options: 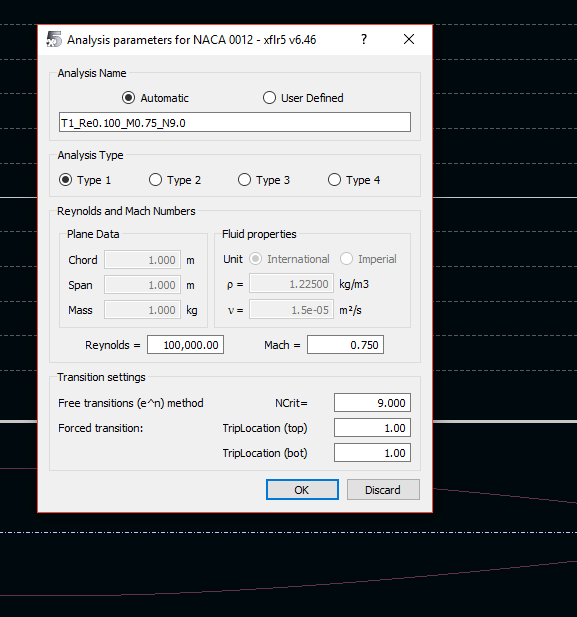 One field contains the expected Reynolds and Mach numbers for the flow.

The other field says Ncrit. What is this parameter, and what does it have to do with the trip location (top and bottom) which can be inputted together with it?

The whole setting group is called transition settings, and refers to the boundary layer transition point (from laminar to turbulent).

The forced transition trip locations are exactly that, expressed as a fraction of the chord, for the top and bottom surfaces. They are akin to placing a trip strip at those locations.

The Ncrit value is a measure of free flow turbulence and is used to simulate the transition location when no forced trip location is given. XFLR5 uses the same method as XFOIL, which is an adaptation of the $e^N$ transition theory. Note this linear theory loses its validity at a fluctuation level of 1 to 1.5 percent, which corresponds to an N-factor of 6.9 to 7.3, meaning it is not suitable for highly turbulent flows.

As to what this is important for, the turbulent or laminar nature of the boundary layer affects flow separation and viscous drag. A turbulent layer will generate more drag, but separate at higher airfoil angles of attack.

Where this gets really interesting is at low Reynolds numbers, where a laminar layer will detach, but become reattached if turbulence is introduced into the airflow ahead of the airfoil, such as by a turbulator. It will then remain attached if the turbulator is removed, displaying a hysteresis loop. The same effect will of course occur in the opposite direction, with a barely attached turbulent layer detaching and staying that way if the free flow turbulence decreases enough to cause it to turn laminar.

I must note that this effect is confined to low Reynolds numbers, on the order of $10^4$.

AEhere supports MonicaAEhere supports Monica
8,36411 gold badge3232 silver badges6666 bronze badges
$\endgroup$
3
Add a comment  |
-1
$\begingroup$
Want to improve this post? Provide detailed answers to this question, including citations and an explanation of why your answer is correct. Answers without enough detail may be edited or deleted.

In their first version Smith and Gamberoni concluded from a series of experimental results that an N-factor of 9 very well correlated the experiments. Their value for N=9 is in fact very close to the mean value of 7.8 and 10 as concluded by van Ingen. (...) If the value N = 9 is assumed to be universally valid, we can “predict” transition for a new case by assuming that transition occurs as soon as the calculated N-factor has reached the value of 9
(Van Ingen, 2008, p.8) Van Ingen, J. L., 2008, The e N method for transition prediction. Historical review of work at TU Delft

Not the answer you're looking for? Browse other questions tagged aerodynamics fluid-mechanics or ask your own question.

7
What is the working principle of a Gurney Flap?
3
How does the adiabatic cooling of wingtip vortices work?
5
What happens when the surface ends at the laminar zone of the boundary layer?
4
Does the Reynolds number on a smaller model need to match the one of the original aircraft?
4
What is the optimum design: elliptical lift distribution or elliptical span loading parameter distribution?
3
How to carry out a CFD simulation for determining the stability derivatives of an aeroplane?
30
Would an 8% reduction in drag outweigh the weight addition from this custom CFD-tested winglet?
1
What are typical stability analysis dampening values?
0
What determines CFD accuracy for aircraft design?