Would a Chinook helicopter fly better with contra-rotating along with counter-rotating propellers? 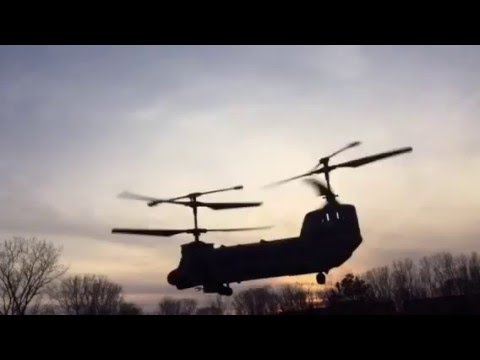 The Chinook DOES have contra-rotating rotors, in a sense. The front and back rotors turn in opposite directions. (Actually, the correct term for this is "counter-rotating".) Read more on this elementary physics page about torques and angular momentum-- https://learn.parallax.com/tutorials/robot/elev-8/understanding-physics-multirotor-flight/rotation-torque-and-angular-momentum

Of course the question was clearly asking about true contra-rotating rotors-- two rotor disks rotating in opposite directions on each rotor mast. This might have a few advantages-- like allowing the Chinook to tolerate an even greater fore-and-aft variation in CG-- but would obviously introduce a great deal more complexity. Whether it would fly "better" is hard to say-- the energy lost through the additional gearing, as well as the energy expended to lift the extra weight, might not offset any theoretical aerodynamic advantages.

Here are some interesting additional tidbits of information about the Chinook--

There is no fore and aft (cyclic) movement in either disk. (There can't be, they'd strike each other.) Aircraft pitch is controlled by differential collective between the disks.

Roll is produced by lateral (cyclic) in both disks simultaneously, and yaw by differential lateral cyclic, if you follow my terminology.

Actually there is a slight fore and aft input by a system called LCT (Longitudinal cyclic trim) that tilts the gearboxes fore and aft to reduce excessive deck angle at speed, but it is not part of the primary flight controls. Conventional flight controls produce these rather unusual inputs via a very complex mechanical mixing unit in the broom cupboard behind the P1.

Due to the dynamics the Chinook develops maximum translational lift in sideways flight to the left, hence the antics of the logging machines plunging sideways on the end of their long cables - gives them greatly increased lift capacity.

Source of quoted material above-- this post (#2) in another forum-- https://www.pprune.org/rotorheads/163538-chinook-other-tandem-rotors-discussions.html#post206883

Note that yaw control is NOT dependent upon the difference in the torque applied to the front and back rotors. Therefore it's clear why this unique and interesting design could tolerate a large variation in fore-and-aft CG, even without the added complexity of a pair of contra-rotating rotors at each rotor mast. In fact, since the rotors are mechanically locked together (see below), it must often be the case that one rotor is absorbing more torque from the transmission system than the other rotor.

A few more bits of interesting information about the Chinook--

The rotor blade systems, though mounted on masts of different height, apparently sometimes do actually intermesh in flight. However they are mechanically locked together by the transmission gearing so that they are forced to turn at the same rpm so the individual blades cannot strike each other.

(This may call into question the statement above that it that it would not have been possible to design the Chinook control system to include collective pitch inputs to either rotor because the blades would strike.)

Now add the real life variations of the actual blade height when passing over the fuselage top due to cyclic pitch and ‘rudder pedal’ inputs (blade flapping) and turbulence (blade flapping and flexing). And factor in the considerable blade droop (downward bending) when parked and on initially setting the rotors in motion.

I hope my contribution counteracts the inevitable legend of the often mentioned apparent difference in height of the two rotor discs: in real life the two rotor discs mesh more or less all of the time. The mechanical synchronization is indeed the crucial element, just like in the egg beater. The mast height difference and the related fuselage attitude are there for other reasons.

Source of quoted material above-- second answer on this thread-- https://www.quora.com/Why-dont-the-Chinook-helicopter%E2%80%99s-rotors-collide-with-each-other -- Answered May 3, 2018 by Frank Sturm, former Flight Ops. Engineer at Martinair Holland (1979-2003)

No. The RC model there is using counter-rotating rotors because the upper rotor with the stabilizer bar has a specific function that makes the model controllable in the first place.

The Chinook already benefits from built-in anti-torque control so that would be a waste of time and oodles of money on the real one.

Fun fact about the Chinook: it can climb better, and fly on less power overall, going sideways. Both rotors are able to bite clean air, achieving translational lift, when going sideways. When going forward, the rear rotor has to cope with the wake of the front one.

First, a little nomenclature: Contra rotation is opposite rotation on the same axis, as seen on the Tu-95 bomber. This increases the efficiency of converting horsepower to thrust in a prop design. Counter rotation is two props spinning on 2 DIFFERENT axes, whose torque effects cancel, as seen on the P-38 Lightning.

The Chinook benefits from counter rotating props (on 2 different axes) as a cargo carrier because it can adjust its center of lift to match the variations in CG of different cargo loads. Moving one prop under the other would lessen this advantage, but mounting 2 sets of contra rotating props would be possible.

May be a possible, but not needed change.

Not the answer you're looking for? Browse other questions tagged aircraft-design aircraft-performance helicopter propeller ch-47 or ask your own question.