Is there a distinction between a cockpit and a flight deck on an aircraft, or are the terms interchangeable?

Based on this image, 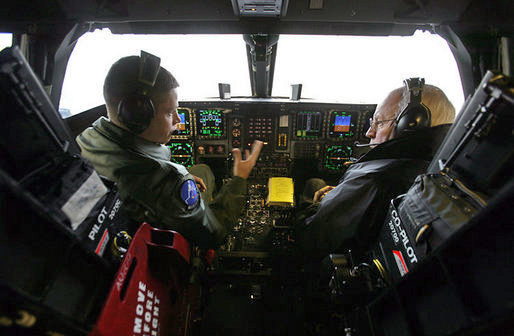 would the B-2 be described as having a cockpit or a flight deck, or is there not enough information in this image?

They refer to the same thing, but there is some separation between the terms, especially in the military. A cockpit is a hole with a seat that you strap into for the entire flight. A flight deck is a larger version of a cockpit, where you can at least leave your seat and walk behind it.

The traditional nautical term "cockpit" referred to a fairly small steering station at the top of the ship. Boeing introduced the term "Flight deck" post-WWII for their larger aircraft, to indicate the difference, and it has spread somewhat. A heavy's flight deck is still a cockpit, and can be referred to as such, but a "pointy's" (jet fighter) cockpit is very unlikely to be called a flight deck in speech.

In general and civil aviation, the terms are pretty much interchangeable. Still, a Ultralight Aircraft's cockpit is not a flight deck, so there is a strong connotation of a flight deck actually being a deck.

The B-2 has a flight deck, so do some fighters like the Su-34. Both can be called a cockpit as well. Basically, solo or tandem seating with entry through the canopy = "cockpit". Side-by-side seating with side door or bottom hatch entry = either "flight deck" or "cockpit".

This distinction is largely English-specific. Powered flight was being concurrently developed in France and Russia, and many languages ended up following their convention ("Piloting post/cabin" and "Crew cabin" respectively), where no term distinction was ever created.

The terms are one in the same. Cockpit is a little more archaic and derives from a nautical term used by the Royal Navy. But both terms mean the section of an aircraft where the flight crew is stationed in order to command and control the flight of that aircraft.

Of interest: https://www.quora.com/Why-is-a-cockpit-called-a-cockpit. Note the reference to the term "cockpit" originally referring to a below-deck compartment in a ship (is this really accurate?), and also the reference to the term "flight deck" orginating with flying boats. Another answer suggests the use of the "cockpit" term in the nautical context goes all the way back to the Middle Ages and is a connected with the term "coxwain".

Here's another source emphasizing the original below-deck connotation for the nautical use of "cockpit": http://www.aerospaceweb.org/question/history/q0064.shtml

Obviously, in the aviation context, "cockpit" is the older term.

It seems intuitive that to merit the term "flight deck", at least one and usually all of the following should be true:

Some organizations prefer one term in their style guide, while others prefer the other. There is no substantive difference between them that I've ever encountered.

25
What are the "lumps" in the A380 flight-deck?
12
Why do cockpits with ACARS have printers?
23
Why does the Dassault Falcon 7X's cockpit have ashtrays?
14
Are there any passenger aircraft with no cabin access to/from the cockpit?
1
Can the pilot stop airflow between cockpit and cabin?
15
Why does the Boeing 777X have a flight deck similar to the 787 and not to the previous 777?
2
"Gross" and "net" planned runway length for the Haifa airport
8
Is it possible for a pressure loss in the cockpit to not extend to the cabin?
10
What is this unit above the autopilot panel in Boeing test aircraft?
16
What aircraft is shown in this cockpit picture?