One of the most dangerous situations possible in skydiving is a so-called downplane, where both the main and reserve chutes deploy, and they shift outwards to the sides of the parachutist until essentially side-on, like so: 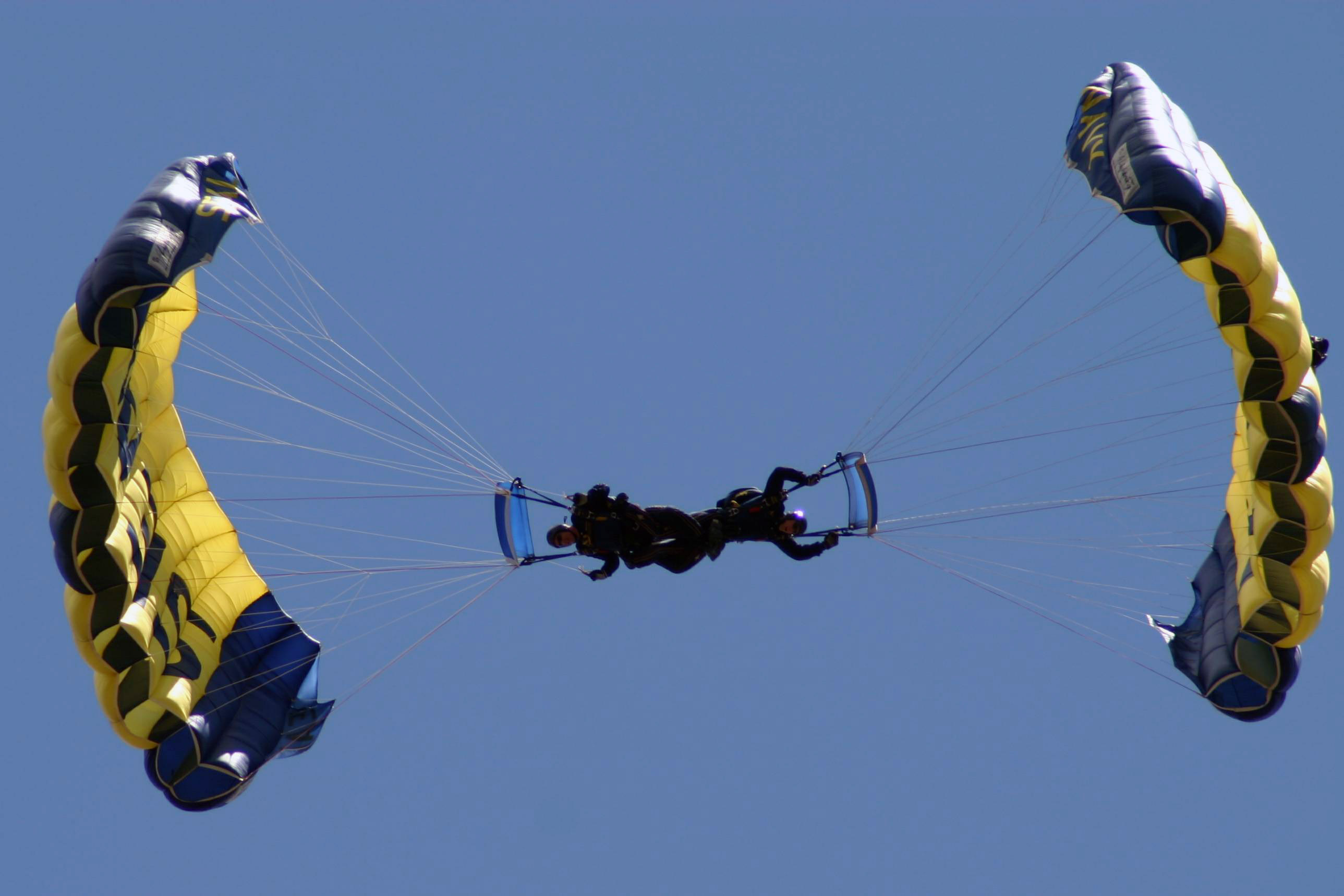 (Image by the United States Navy, via Wikimedia Commons; this is actually a simulation of a downplane, with two parachutists and only one parachute per parachutist, rather than the real deal, which would involve both parachutes deploying from a single parachutist, but it illustrates the configuration very nicely.)

This reduces the total cross-sectional area (as seen by the airflow) of the parachutist-parachutes assembly, causing said assembly to accelerate downwards to greater-than-optimal speeds, which is why a downplane situation is dangerous.

However, it is far from obvious how a downplane would be aerodynamically stable; even when virtually edge-on, each of the open parachutes still has a very high drag coefficient,1 a fairly low mass, and (as a result) a very low ballistic coefficient,2 while the skydiver attached to the parachutes has a fairly low drag coefficient, a much higher mass (relative to their parachutes), and, consequently, a very high ballistic coefficient. As such, the parachutist should tend to trail ahead of the two parachutes, with the aerodynamic forces on the latter wrenching them up towards top dead3 center, unless the whole shebang is spinning rapidly enough about its vertical axis for the outwards centrifugal force on the parachute canopies to overcome the upwards drag force on said canopies, which would require a spin rate high enough to be lethal even without taking parachute malfunctions into account.

What is it that overcomes these aerodynamic forces on the parachutes and renders a downplane aerodynamically stable?

1: Albeit much lower than when face-on.

2: A measure of the relative unaffectedness by aerodynamic drag of an object moving through an atmosphere of given composition.

It appears that each parachute will tend to adopt a position where a line drawn from the skydiver through the center of pressure of the chute is aft of a line drawn through the skydiver perpendicular to the relative wind, by an angle equal to the L/D ratio of the parachute. The higher the L/D ratio of the parachute, the closer to "straight overhead" the chute can be, in the reference frame of the falling skydiver with his body positioned horizontally as per the photo. Much as the higher the L/D ratio of a kite on a string, the closer its steady-state position can approach a position straight "overhead" the kite flyer. But a stable downplane should be possible even with chutes with a rather poor L/D ratio-- the chutes just wouldn't be positioned nearly opposite each other as is the case in the photo. This would be analogous to a kite with a poor L/D ratio flying in a position that is far from "overhead" the kite flyer. The speed of such a downplane would tend to be lower than the downplane illustrated in the photo.

The parachutes are both being pulled straight down from a single point. That means the relative airflow, or angle of attack, is straight up. Lift is perpendicular to the AOA. Even if the parachutes are stalled at near 90 deg AOA at the beginning, there is still a bit of lift being produced, which acts at 90 degrees to the AOA, creating a net thrust component that causes the canopies to move away from each other, reducing AOA as they arc down, and as they become more unstalled by the reducing AOA, the lift force with net thrust component perpendicular to the AOA gets stronger, driving them away from each other harder and they arc down some more.

Eventually, as they move down to the sides, AOA continues decreasing and therefore the net thrust component of the lift force decreases, until it's small enough to be balanced by the drag of the canopies.

Not the answer you're looking for? Browse other questions tagged parachute skydiving failures or ask your own question.

12
What happens if a parachute does not open while skydiving?
54
Why don't pilots parachute from small planes that are in distress?
14
What is the purpose of D-Bag in skydiving parachute?
9
Is there a standard text for parachute design?
23
Do any commercial airline models have a parachute at rear to help in landings?
16
Why is the drogue parachute jettisoned on the runway?
16
What is the equivalent height of a parachute landing?
93
If my parachute fails to open, why should I aim for land rather than water?